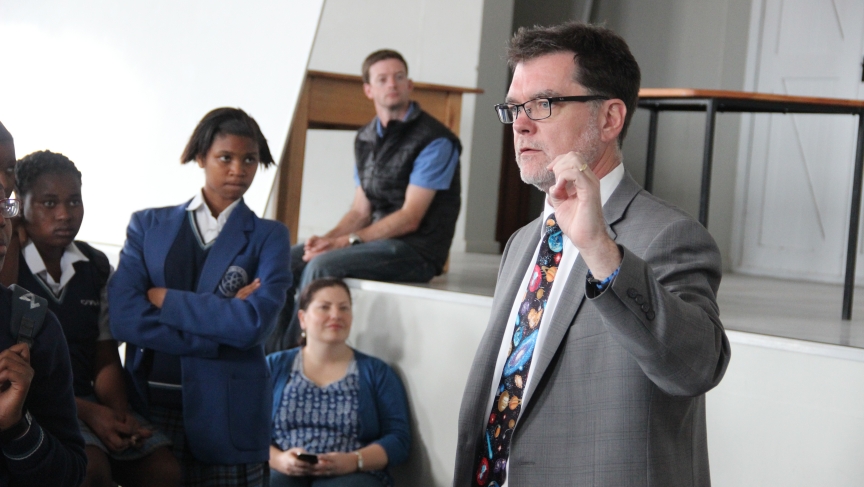 Last Friday, students at the Centre of Science and Technology (COSAT), the math-science high school near Cape Town that I've been following this year, were in for a treat. Jim Adams, a senior scientist for NASA, was in South Africa and decided to visit the school.

When classes let out, Mr. Adams — wearing a tie decorated with planets and stars — delivered a 30-minute talk in the school’s auditorium. An excited group of 50 students came.

Much of the lecture was focused on asteroids. Adams said very few potentially dangerous asteroids — ones that could come within striking distance of Earth, and are big enough to cause damage to the planet — are being discovered anymore.

“That’s because we already know about most of them,” he said. He showed a graph of the history of asteroid discovery.

Then, he opened up the floor to questions. As it turns out, very few were about asteroids.

“So, I heard they discovered water on Mars recently,” said Tandie, a senior. “And now they think there might be life there. But couldn’t life be completely different on Mars than it is here? Why does there have to be water for there to be life?”

Adams agreed with Tandie — it’s possible that life on other planets could be fundamentally different than it is on Earth. He encouraged her to learn more about it.

Next was a question about the end of universe, followed by one about aliens.

Then, Olwethu, a ninth-grader, chimed in: “What I want to know is, could we build a spaceship that’s big enough to bring people from Earth to Mars, and could we also bring plants along so that we could start settling the planet?”

Olwethu’s question then turned into a bit of a brainstorm. She seemed to be on a roll.

I slipped out of the auditorium, but I bumped into Olwethu 20 minutes later in the courtyard. She had just finished speaking with Adams. A NASA pin was proudly displayed on her sweater.

"He told me that I should just come work for NASA," she said, beaming. "He said I should figure out how people can live on Mars."