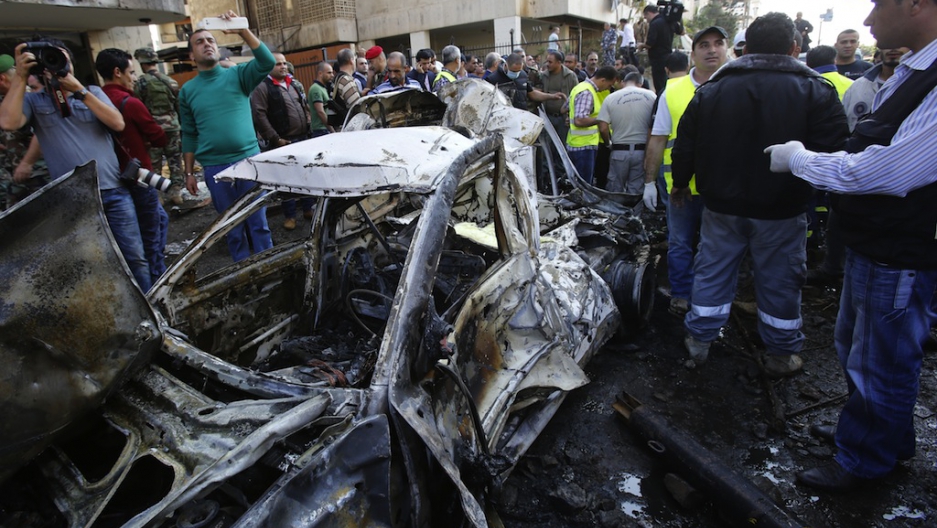 Rescue teams, journalists and security forces gather at the site of a blast in Bir Hassan neighbourhood in southern Beirut on November 19, 2013.
Credit: ANWAR AMRO
Share

The attack killed 23 and injured 146 in the suburb of Beir Hassan, according to local hospital figures. Officials said the violence was the latest in a string of sectarian attacks connected to the conflict in neighboring Syria.

“I was walking outside when I heard the bomb,” said Abdullah Hamaree, a builder who lives down the street from the attack, as he lay bloodied and bandaged among the injured in the emergency ward of Rafik Hariri Hospital.

Hamaree said he thanked God that his wife and children had stayed home, and escaped injury. He had left the house to buy groceries.

“I ran to check what had happened. I was trying to help the injured people when others began shouting, “Go back, go back!” And it happened. Boof! The second one hit,” he said. “I didn’t feel anything. I just woke up here. Look at my hands — they are full of glass. The glass of all the buildings came down on us.”

Victims were sent to several hospitals in the area, said Wassim Wazzam, chairman and director of Rafik Hariri Hospital. His hospital took in seven dead and 25 injured. Four were undergoing emergency surgery, but he said they hoped to release the majority of the victims within the next 24 hours.

“This is the largest amount of casualties we have received in such a short period since the Israeli bombings of 2006,” when Israel and Lebanon went to war, he said. “But here in Lebanon we have seen a lot of war so this is not new to us.”

The twin attack happened just before 10 a.m. Tuesday morning. Police said a man approached the gates of the embassy on a motorcycle before detonating a suicide vest. A second bomber then attempted to drive a car laden with explosives through the damaged gates of the embassy. He was shot by embassy security guards before the car bomb exploded in the street.

The Abdullah Azzam Brigades, an Islamist militant group with ties to Al Qaeda, claimed responsibility for the attack on Twitter.

"It was a double martyrdom operation by two of the Sunni heroes of Lebanon," wrote the group's spiritual guide, Sheikh Sirajeddine Zuraiqat, under the hashtag #Battle of the Iranian Embassy.

In a second tweet Zuraiqut said such attacks would continue until "all Iran fighters withdraw from Syria and our families are granted freedom in Lebanon.”

At this point, it’s not clear how many of those killed worked at the embassy. Conflicting media reports put Iran's cultural attaché among the injured, and possibly dead.

But because the bombs detonated outside the gates, police said most of the victims were civilians who lived near by or were on the street.

Natalia Bumenlag, a Filipino housemaid who works in a neighboring building, said she was heading to the balcony to hang washing when the explosion blew out the sliding glass doors.

“I was about to go out and then — Boom! Boom! — all the glass fell down on me. But I put my hands up and pushed,” she said, holding up her bandaged arms. “If I didn’t put my hands up maybe it would have cut off my head.”

The mother of the family Bumenlag has worked with for 12 years wiped the blood from Natalia’s fingers. A severe gash above a bruised and swollen left eye had been stitched.

“I called out for help to madam. I said, ‘Bring me a towel. I am bleeding.’ The ambulance men came and carried me down. The whole street was totally destroyed. All the glass and doors had been blown in. Some cars were upside down. There was fire and smoke.”

Bumenlag awaited surgery to remove dozens of splintered pieces of glass that had lodged in her legs. Doctors said they suspected her shoulder had also been fractured when she hit the floor, but with the overwhelming number of patients she had not yet been x-rayed.

Hospital staff said the whole building shook when the explosions detonated. Shortly after, casualties and bodies began to arrive.

“We are well trained and prepared for such disasters,” said Mohammed Kassab, the hospital's clinical engineering chairman, as he oversaw treatment of victims in the emergency ward. “We have procedures in place for what we call a Code Orange. We have a full team of doctors, nurses, maintenance crew, clinical site managers and ICU staff on call in case of such an emergency. The reception of all casualties here has been well organized from the beginning.”

This is the third attack in Lebanon this year linked to the Syrian war. A car bomb explosion in a neighboring area of southern Beirut killed 21 in August. And a twin bombing targeted two Sunni mosques in Tripoli eight days later.

Tuesday’s attack occurred in a predominantly Shia neighborhood. It’s considered a stronghold of Lebanon’s Hezbollah forces, who have provided the Assad regime with weapons, training and fighters.

The Syrian conflict has inflamed sectarian tensions throughout the region. Syria’s rebels are largely Sunni muslims, as are many Lebanese militants. The Syrian army, meanwhile, is largely backed by Shia fighters from Hezbollah and Iran.

Locals fear Tuesday’s bombing could lead to another bout of sectarian violence in this politically fragile country.