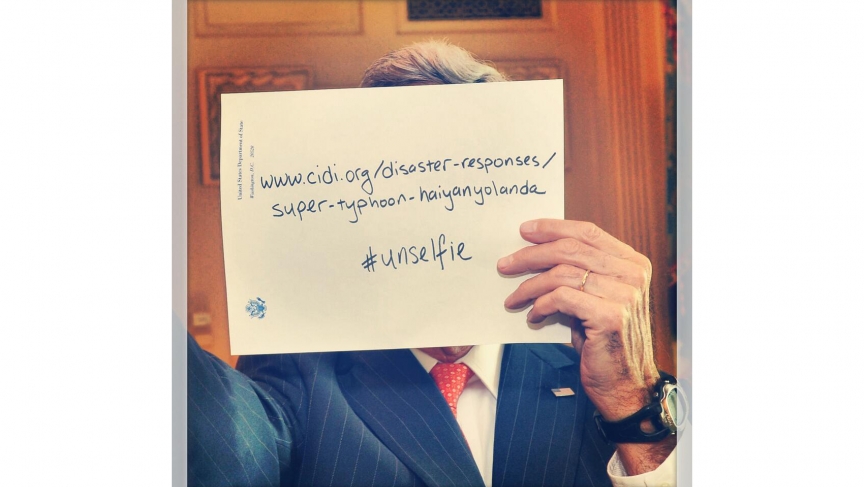 Even US Secretary of State John Kerry got into the #unselfie act — promoting a charity for Typhoon Haiyan relief.

The Oxford Dictionaries have declared selfie the "word of the year" for 2013.

If you're not familiar, a selfie is a self-portrait, usually taken with a phone or digital camera and an outstretched arm. The selfie has been derided as another example of today's self-absorbed youth — but that's not all these pictures can show.

David Guerrero, creative chairman of BBDO Guerrero, launched a campaign to get people to take selfies, but without themselves. The idea is to create an "#unselfie" — a picture of yourself holding a sign that hides your face and urges people to support relief aid for the Philippines. The aim of the campaign is for people to spread the photos through their social networks, and the hashtag makes it easy to see the cumulative effect of the campaign.

Suffice it to say, the project has taken off. US Secretary of State John Kerry posted one; so have literally thousands of everyday people all around the world.

"We thought this was a simple way for people to substitute their normal activity of uploading the selfies and use the idea of #unselfies to spread the word about how to donate," said Guerrero, who's based in Manilla.

Guerrero's not picky about what particular charities people promote in their #unselfies — any that people believe will support the victims of Typhoon Haiyan in the Philippines. He said it could be UNICEF, the Red Cross or some other group entirely.

"We've had about 9 million impressions," he said. "Mia Farrow has retweeted something. We've just seen an amazing kind of response to this."