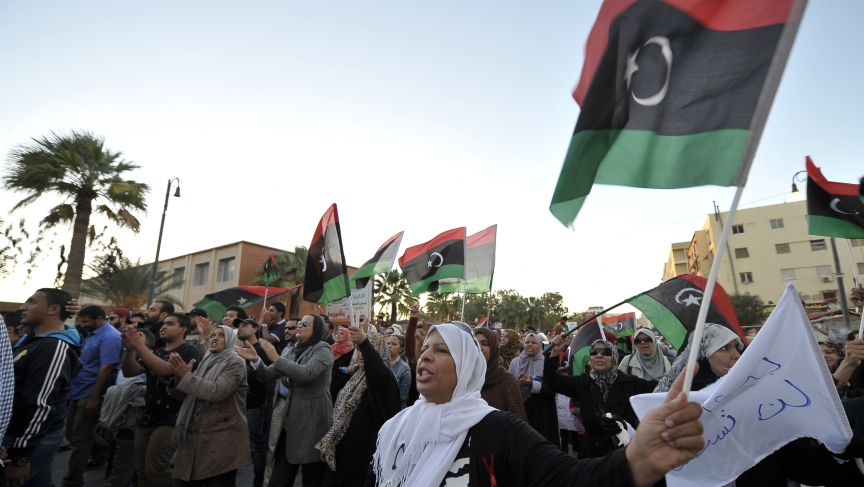 Demonstrators protest against armed militias as they welcome the arrival of the Libyan army in Benghazi, November 8, 2013. Libya's army moved into Benghazi in eastern Libya on Friday, a show of force aimed at restoring order in the country's second largest city, rocked by almost daily bombings and assassinations.

"They were met with live gun fire, including anti-aircraft guns. Fourty-seven people were killed and and more than 480 people were injured," says Rana Jawad, a BBC reporter in Libya.

A short time after that, Mustafa Nuh, Libya's deputy intelligence chief, was abducted at an airport in Tripoli by gunmen. He was later released.

This is what Libya looks like these days. As the country tries to put behind it the violent days of the revolution, militia groups are threatening any sense of peace and security.

"The government is well aware that they are not in control. They say they are trying to work with the capacity they have on hand. They insist that they are still rebuilding the security forces," says Jawad.

Salah al-Maghani, Libya's justice minister, agrees: "I think we failed the Libyan people on realizing how difficult it would be to deal with the fallout from the revolution ... allowing for security to deteriorate. We need to do more," he said to the BBC.

Jawad says that the interim government has done more, by deploying the army on the streets of Tripoli. "Some of the reactions included people really being astonished, saying, 'oh we have an army!'" she says.

But that hasn't been enough to relieve popular distress. On Sunday, the city was hit by a three-day general strike in protest.

"Everything very much remains closed," Jawad says. "All the shops are closed, the banks are closed, the only businesses that are open are the bakeries, supermarkets and some pharmacies ... The streets are eerily empty and the blockades remain in place." she adds.

The people in Libya removed a dictator from power. But they are still waiting for the freedom and stability they sought.