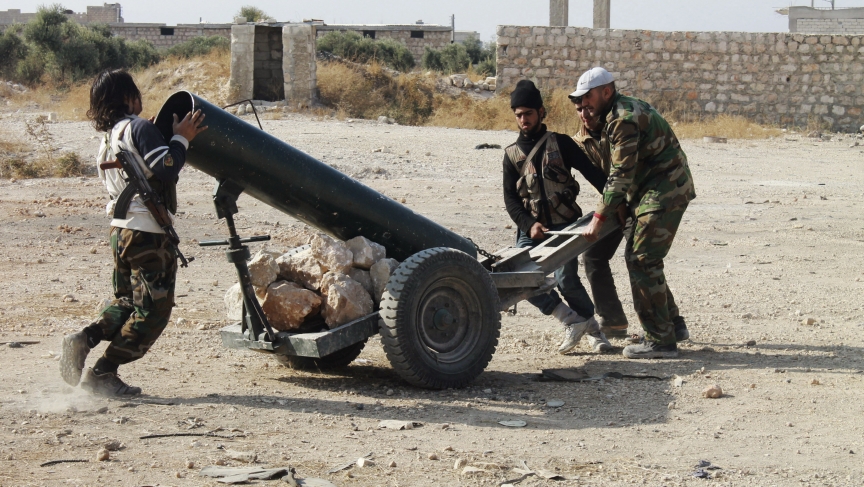 The news from war-racked Syria is bleak.

And it's all too rare that we get a glimpse of the actual men and women behind the grim headlines.

Ghaith Abdul-Ahad has spent considerable time with those caught up in the war. He's a journalist for The Guardian based in Istanbul.

In his latest piece for the newspaper, Abdul-Ahad zeroes in on three Syrians who work with a moderate opposition battalion: a businessman, a smuggler and an army defector.

The businessman was once a wealthy investor in Homs, but he lost much of his fortune in the war. In a frank admission to Abdul-Ahad, he says he thinks it would be better for Syria's future if the war continued for at least two more years.

"That was the strangest thing I've heard in my life," Abdul-Ahad says. "I mean here is a man who has invested everything — money, family, friends, power, everything — in trying to fight the regime of Bashar al-Assad. Yet the realpolitik of the civil war kind of forces him to stop and calculate. If Bashar falls now, the Islamists are very strong — he'll be defeated by the Islamists."

Abdul-Ahad adds, "So he stops and questions all of this, and says, 'No, I don't want Bashar to fall now. I want two years to organize the international Syrian house before we continue in our war against Bashar.' "

Another character Abdul-Ahad profiles is an arms smuggler who works with the same opposition battalion. Like the businessman, the smuggler lives in exile and sees no way out of the conflict. He's constantly fidgeting with his smartphone and says he's paying the bills for 20 family members.

"And now the smuggler every day he goes on Google Earth on his Samsung S3 and he starts kind of pinching and moving and trying to find his house, and finding the shed where they kept their sheep and cows," Abdul-Ahad says.

The third character he profiles is an army defector who commanded one of the rebel opposition's first armored battalions. Abdu-Ahad describes him as "the most romantic of the three. Unlike many of the army officers in the Middle East, this guy is very educated. He loves reading, he draws lessons from history."

Each of the characters sees the flaws in the Syrian opposition movement, and questions its stated goals.

"In a way, I like those three guys because, unlike many others, they kind of calculate the future, they stop being romantic rebels, and they are very pragmatic and try to calculate: How can we survive tomorrow?" Abdul-Ahad says.