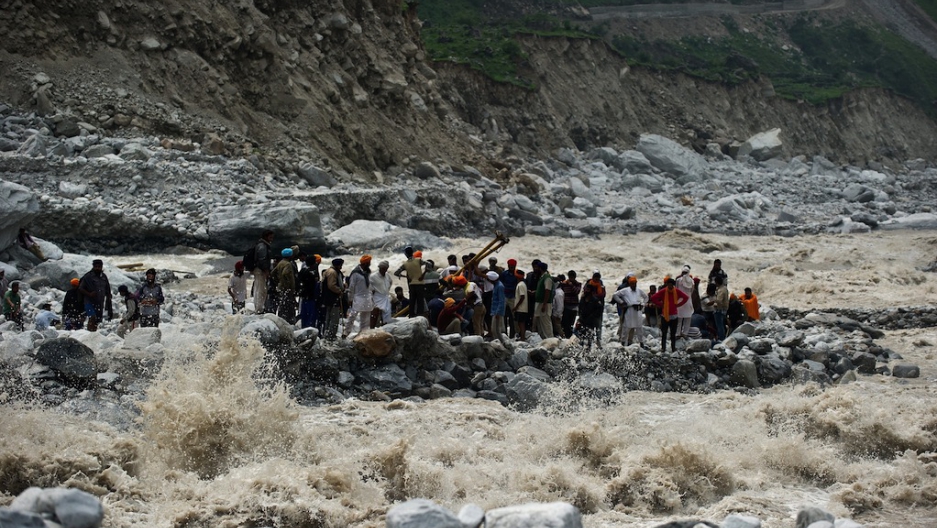 Stranded Indian pilgrims wait to be rescued on the side of a river at Govind Ghat on June 23, 2013. More than 6,000 died in landslides and flash floods that left pilgrims and tourists stranded without food or water for days. Scientists expect such deadly glacial deluges to grow more frequent.
Credit: Manan Vatsyayana
Share

UTTARAKHAND, India — The raging torrent hit in the morning, as Gopal Singh Bhist and his son, a cook and the leader of a pony train, prepared for work.

In minutes, the Mandakini river had breached its banks, sending a crushing hammer of water, ice and rock through the Himalayan villages in this north Indian state of Uttarakhand.

“There was no meaning in it. It didn't give anyone a chance to survive,” Bhist, a gaunt, weather-beaten man with a piercing stare, told GlobalPost. “Instantly, the water turned everything upside down.”

Bhist and his son were in Rambada, 5 miles downstream from the Hindu pilgrimage town of Kedarnath. Each day during summer, an estimated 5,000 people trek through the valley to the bustling mountain outpost to visit the majestic eighth century temple dedicated to Shiva, the Hindu god of destruction.

For the cooks, dishwashers, porters and other men who made their livelihood from the pilgrimage, a typical morning was suddenly transformed into a life or death struggle. The young and strong scrambled up the mountain. Older men, like Bhist, sought whatever cover they could find.

“I found a tree and threw my arms around it. I thought, if the tree is washed away I will go along with it. I hung on alone,” Bhist said.

His son ran off with the younger men.

Soon, unknown thousands were swept away or buried under swirling sand.

Finally, in mid-afternoon, the weather cleared. Slowly, a tiny group of survivors gathered, and waited.

The pilgrimage route, and the entire town of Rambada, had washed away. There was no way up and no way down. It was as if the world they had known all their lives had been erased.

For four long days Bhist and the rest of the older men huddled amid the ruins of Rambada, surviving on packages of crackers and bags of bread dropped by an air force helicopter. The weather was too rough to land. Fearing the river was contaminated, they shared four bottles of water scavenged from a local shop, rationing their sips to make it last. Finally, the air force was able to evacuate the survivors.

There was no sign of the young men who had scrambled for higher ground. Neither Bhist’s son nor any of the others ever came back.

“I waited four days hoping they would come back, but the people who went up the hill did not return,” Bhist said.

The mid-June 2013 deluge affected tens of thousands of people, washed away hundreds of villages, and killed at least 6,000 people. It stranded around 70,000 religious pilgrims in the mountains for weeks, as the Indian army and air force worked day and night to evacuate them. The official tally continued to fluctuate months after the disaster as more bodies were recovered.

Across rugged Himalayan valleys, hundreds of bridges were destroyed. Landslides covered thousands of miles of road. Houses, schools and hotels toppled into the torrent. Bustling markets were swept downstream.

The epicenter of the disaster was Kedarnath, near where Bhist lost his son. There, it leveled everything but the Shiva temple.

The immediate cause: the bursting of a natural dam holding back a glacial lake that ultimately triggered the “Himalayan tsunami.”

But the root cause was climate change, according to experts.

As the weeks passed, scientists concluded that something more complex had occurred than the simple bursting of a glacial dam.

The devastation was unleashed by a perfect storm consisting of heavy rain; warmer, looser snowpack; and most insidiously by a climate-induced glacial instability that, in future years, threatens to wreak havoc across the region, dozens of miles from the high peaks.

Underlying all of these is a factor beyond India’s control: the changing pattern of the monsoon.

Lifelong residents say they have never seen a torrential downpour like the one that struck this past June. But the timing was as important as the volume of the rains. Since local scientists became aware of the issue of climate change, they’ve observed that the snow has been coming later and the rains earlier every year. At the same time, the sudden cloudbursts that most often cause flash flooding have increased in frequency.

In 2013, the snowmelt runoff was at its peak when the monsoon arrived — letting loose the deadly cloudburst over Kedarnath.

“Earlier there was [such a] cloudburst [every] five, six, eight years. Now you see one every second year,” said Anil Joshi, who heads the Himalayan Environmental Studies and Conservation Organization (HESCO).

“Continuous and heavy rainfall occurred on the 15th and 16th [of] June,” said Wadia Institute of Himalayan Geology (WIHG) glaciologist D.P. Dobhal. “If you see the measurement of all the previous years it was 200-300 times more than normal.”

The shifting climate also has an adverse impact on the snow pack.

Warmer temperatures mean that snowfall that once began in October now arrives in January. That leaves too little time for it to harden into more heat-resistant ice. So when summer returns, the volume of meltwater is much larger.

Combined with the snowmelt, the June downpour caused flooding in countless sites along the six tributaries of the mighty Ganges that originate here.

Aside from the stronger rains and the later snowfall, melting glaciers are literally transforming the Himalayan landscape at an unprecedented rate.

An hour or two before the flash flood forced Bhist and the other laborers to scramble for safety, scientific observers posted at the Chorabari Lake, about a mile and a half upstream from Kedarnath, heard a loud bang, according to WIHG’s Dobhal. It had already been raining for days, and millions of gallons of water had accumulated in the lake.

Now, Dobhal speculates that the bang heard by his researchers may have been the noise of an avalanche or landslide that knocked loose the natural dam of ice and rock holding back the lake — draining it in minutes and sending the full force of the waters down onto the town below.

It won't be the last such disaster, experts fear.

Across the region, rising temperatures are fast creating thousands of such lakes. And the growing volume of meltwater is dangerously increasing the risk of sudden glacial lake outburst floods, according to the Kathmandu-based International Center for Integrated Mountain Development.

More than 200 of these lakes have been classified as potentially dangerous. Some of them — like a 250-acre lake holding 5 billion gallons of meltwater high in the mountains of the northeast Indian state of Sikkim — could affect many people living hundreds of miles downstream.

“There are so many lakes in the higher reaches,” said WIHG’s Tewari. “We have to monitor all those lakes now. This might happen in other parts of the Himalayas especially in Badrinath and Gangotri [where there are also temples that attract hundreds of thousands of religious pilgrims every year].”

There are some 250 glacial lakes above population centers like the tourist town of Manali, for example.

And shortly after the Kedarnath disaster this summer, images from remote sensing satellites showed that the level of water in Parchu Lake, in Tibet, was also rising rapidly, putting some two dozen towns and villages along India's Sutlej River in Himachal Pradesh at risk.

Today, the tourists and pilgrims have been evacuated from Uttarakhand. But government officials and aid workers are still coping with the tragedy’s impact.

With the destruction of the roads and bridges connecting many villages to larger towns and cities, tens of thousands of people are now forced to hike for basic supplies like rice and flour. Moreover, their renewed isolation threatens to erase the economic gains that come from access to markets and labor centers.

“We have villages that got totally destroyed,” said Aditi Kaur, 43, who heads the non-profit Mountain Children’s Foundation. “The river has just become so wide now, [and] the flow was so swift, that there is no rubble left to see.”

“The fields just disappeared into the river so the food-grain you are growing for the next year is not going to be there. The disaster that has happened today is also affecting tomorrow and a year from now.”

Worse still, in some of these villages, all of the men worked in Kedarnath during the pilgrimage season, so there are countless families whose fathers, husbands, and brothers have all been lost.

Because few village women have ever left their fields and livestock for paid jobs — though all of them work from sunrise to sunset — a loss of husband and father means the loss of the family’s sole breadwinner.

That was the scene that confronted Bhist when, five days after he'd clung to a tree to save his life, he hiked four hours to his home village of Chandrapuri.

Some 64 of his downhill neighbors’ houses had been washed away, along with acres of fields and crops. Half of the village was now a floodplain of gray sand.

Worst of all, his son had not returned.

When two of his four ponies straggled in, alone, a few days later, he knew he’d never see him again.

There is now nobody but 64-year-old Bhist left to support the son’s wife and two small children — a 6-year-old girl and 4-year-old boy.

Having spent all his life working the pilgrimage route, he cannot imagine returning to the only job he knows, and virtually the only one available, after the horrifying ordeal that he suffered.

His religious faith, too, has been shattered.

“Where is God? We used to go there to pay our respects to God, to touch his feet and daily bow our heads before him. God could have saved us somehow or the other. He could have taken me and saved my son.”

This story was edited by David Case - @DCaseGP.