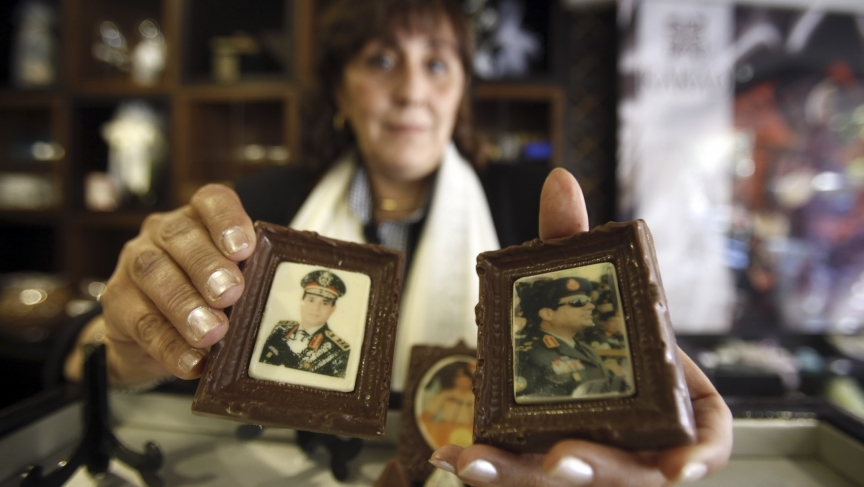 Bahria Galal, an Egyptian owner of a chocolate shop and supporter of Egyptian General Abdel Fattah al-Sisi, displays her products decorated with portraits of Sisi at her shop in Cairo on Sept. 8, 2013.

Many Egyptians are actively showing their love and admiration for the country's top military commander, General Abdel Fattah al-Sisi. He helped lead the removal of Egypt's democratically-eleted president, Mohammed Morsi. The general's images are showing up everywhere.

There's even a chocolate shop in downtown Cairo selling chocolates with Sisi's face on them, says Borzou Daragahi, a reporter for the Financial Times in Cairo.

"People put up portraits of Sisi on their taxi cabs and in front of their homes. You have people even naming their children Sisi," Daragahi says.

General al-Sisi came into the spotlight at a crucial point in Egypt, he adds. "It was at a time when people were very desperate for leadership. People were looking for a hero, and he was there at the right time, the right place and he said the right things."

"In Egypt, you have these private TV channels that are highly influential, owned by big business people who have very strong ties to the deposed regime of Hosni Mobarak. [They] have really strong interest in not having the status quo upended," he says.

Daragahi says Egyptians are not media-savvy and that makes it easier for powerbrokers to portray Sisi in a positive light.

"When they see someone they like on television speaking glowingly about Sisi, they may just buy into that uncritically," he adds.

Egypt is struggling to rebuild a normal political system and the interim government is trying to draw up a new constitution. Daragahi says there are rumors that the military, led by officers like al-Sisi, is pressuring officials who are drawing up the constitution to give the military extraordinary privileges and immunity from certain types of prosecutions.

At the same time, Tahrir Square, which became a symbol of the popular uprising in Egypt, is getting a make-over. The stone base and pedestal for a memorial to those slain during the uprising was unveiled by the interim prime minister on Monday.

"Many see this as an attempt by those who committed crimes against the Egyptian people to co-opt the memory and legacy of Tahrir square, and they view this rather cynically," Daragahi says.