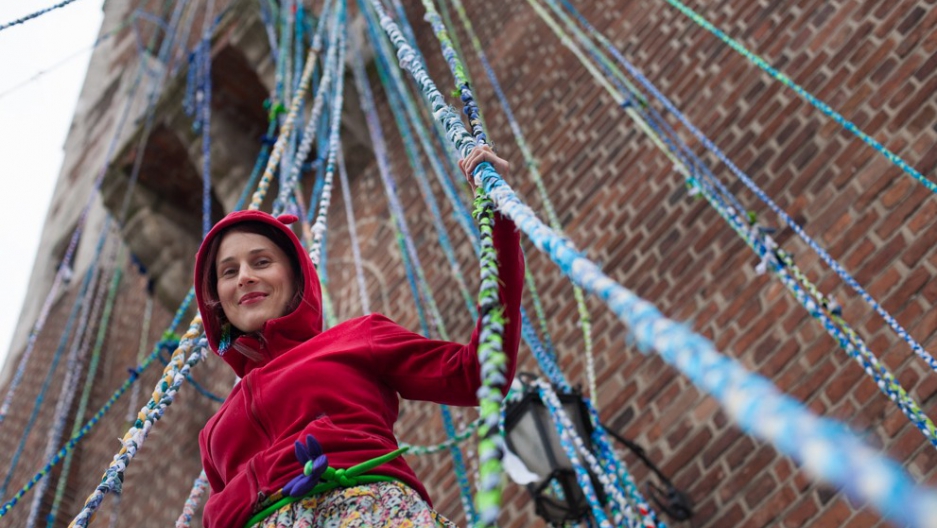 Malik with part of her 12-mile braid for the Bialka.
Credit: Mieszko Stanislawski
Share

KRAKOW, Poland — Earlier this year, Cecylia Malik ensconced herself inside the Bunkier Sztuki Gallery here for an interactive project: she would ask visitors to help her plait a colorful 4-mile braid, the world’s longest.

Not just art for art's sake, the project was part of her campaign to save the Bialka River in southern Poland from over-development.

Bored by conventional petitions and protests that had largely been ignored, the smiling, red-haired 38-year-old succeeded in capturing the imagination of scientists, fellow artists and ordinary people who joined her in April to lay the recycled fabric braid across the Bialka’s banks in vivid protest.

It was media-savvy — a visually appealing, oddball campaign lapped up by reporters also tired of the same old approach.

“There had been a lot of things — letters and petitions — but it was boring, completely boring stuff,” Malik says. “So my friends and I prepared something crazy, funny, beautiful and nice. We wanted to make the fight famous.”

Although the river is part of a network of areas protected under a European Commission project called Natura 2000, some argued the regulations should be relaxed to allow for flood-mitigation work.

Local residents wanted the riverbed deepened and containment walls built along the banks, which often flood and change course.

Malik’s activism eventually pressured the government to bow to public pressure last month by scrapping plans to “regulate” the river — for now, at least.

Malik — who’s making a documentary film about her Bialka’s Braids project — has brought the enormous work to the UN’s climate change conference taking place this week and next in Warsaw, where she was invited to set up an installation.

She's directed much-needed attention to the fraught debate between supporters of environmental protectionism and development in Poland, where decades of communist rule that focused on building heavy industry have taken a terrible toll on natural ecosystems.

While some Western European governments are attempting to reverse the mistakes of the 1960s and ‘70s with projects to restore rivers encased in concrete, experts say the Polish authorities largely remain locked in old thinking.

The authorities have channelized more than 6,000 miles of river in the past two years, according to hydrobiologist Roman Zurek of Krakow’s Institute of Protection, who adds that less than 2 percent of Poland’s 4,000 bodies of water are currently considered to be in “good” health.

One legacy of under-education and environmental neglect under communism, says Krakow conservationist Pawel Augustynek Halny, is that natural habitats remain undervalued, seen by many as a commodity to be exploited as the economy grows.

“In most of the parts of Poland, they are cutting down trees and building walls on the banks of rivers,” he says. “It’s very unnatural. The devastation is huge.”

With her mantra “defending beauty with beauty,” Malik has become an unlikely force for the environmental movement.

She took up conservationism after a bout of depression four years ago.

Reluctant to spend all day alone in her studio and inspired by Italo Calvino’s 1957 book "The Baron in the Trees," she photographed herself climbing the branches of a new tree each day for an entire year.

“I wanted to break some rules, try something different,” she says. “But I’m a mom, I have two children and it wasn’t possible to escape from my private life because I had to climb down the tree every day to the kids. But I escaped in a metaphorical way.”

Malik’s often breathtakingly precarious series of 365 photographs went viral on Facebook and connected her with a large network of influential environmentalists, journalists and other admirers.

In 2011, she learned that a developer had bought the Zakrzowek reservoir outside Krakow’s city center for a major housing development that would threaten the habitat of the common blue butterfly.

Capitalizing on her new prominence, Malik donned vibrant handmade blue wings to galvanize locals to rally against the plans together with her sister Justyna Koeke. The authorities scaled back the project soon after and the developer eventually pulled out, saying it was no longer financially viable. The reservoir was saved.

Later that year, Malik began videoing herself paddling down Krakow’s six waterways aboard a raft made of recycled materials, which later morphed into a project to raise awareness about river pollution that eventually spurred the Bialka’s Braids project.

Although she considers herself an artist first, she says her childhood spent in the Polish mountains has driven her love of nature and commitment to protecting her country’s natural assets.

“Maybe five years ago I could have gone alone to the river and screamed from the banks and no one would have heard me. I had no power,” she says.

“But now I know my voice will be noticed, I want to say something important, use that little bit of power in a good way.”

Editor's note: An earlier version of this story said the Bialka's Braids project was 12 miles long, the length of Malik's initial plan.