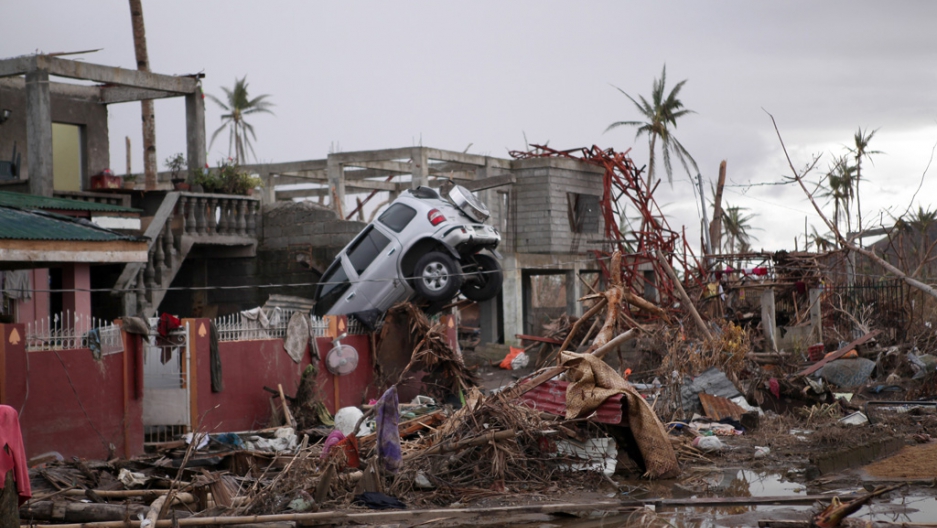 An SUV rests on a wall in the aftermath of typhoon Haiyan on Nov. 17, 2013 in Tanauan, Leyte, Philippines.
Credit: Jeoffrey Maitem
Share

CEBU, Philippines — It was the middle of the night when Angelo Reyes’ world was ripped apart.

"Debris slammed into the side of our house, shaking its foundation, smashing through the windows. The roof went next. Piece by piece it peeled away like a shredded ear of corn.

“We were running to the bathroom when the wave came. It was massive, punching out the front and back walls. I was carrying my two oldest daughters. My wife, Abigail, had our youngest.”

Reyes, a short and wiry man with gaunt bloodshot eyes, will never forgive himself for what happened next.

“The water moved so fast. It knocked them down and into the street. Abigail was screaming for me to help her, but there was nothing I could do,” he said.

Abigail and his 5-year-old daughter Divina, who had started school in June, washed into the swirling mass of black water.

Reyes wept, clinging to the two daughters he had in his arms, huddled in the corner of his gutted home.

At daybreak, the devastation of 195 mph winds and 20-foot waves was apparent.

About 90 percent of buildings in the capital of Leyte — a hardscrabble province about 10 miles north of conflict-wracked Mindanao — were destroyed. More than 200,000 people in Leyte alone were homeless.

The latest death toll has risen to 3,633, and authorities in the Philippines said they expect it to rise further. Millions have been impacted, injured and displaced.

More from GlobalPost: These Instagram photos taken after Typhoon Haiyan are devastating

Iron roofs had been shorn off buildings, making them look like moth-eaten cake tins. Palm trees, power pylons, cars and fishing boats from the coast, about 1,000 feet away, were deposited in, on and through the edifices.

“It was like God had punched Tacloban in the face,” Reyes said.

“The bodies were everywhere — hundreds of them. Survivors were searching for their missing. Screaming their names over and over. I never heard a single reply.”

Survivors wait for a military plane at Tacloban airport in the aftermath of Typhoon Haiyan on Nov. 17, 2013. (Dondi Tawatao/Getty Images)

Reyes’ own calls to Abigail and Divina would also go unanswered.

“I searched everyday — but nothing. I think they were sucked back out to sea,” he said.

What was left of his family found shelter with an elderly couple, whose badly damaged house slumped precariously half a mile up the road.

There, he found seven other broken families crammed into three tiny rooms — a few liter bottles of water and a smattering of water crackers and canned beans to share among them.

Given the enormity of the devastation, Reyes was adamant help would arrive.

Their rations had already been extinguished. They collected rainwater with whatever “could be fashioned into a cylinder.”

“There was screaming, and what sounded like fighting the night before. We were thirsty and on edge,” said Reyes.

Those fears were well-founded.

“They came during the night for our food. About eight of them, armed with sticks and machetes. Some people got hurt. One man was beaten badly. They left when they realized we had nothing for them to steal,” Reyes said, touching an eight-inch bloodied bandage on his leg, cut by a piece of flying corrugated iron.

According to Reyes, the army finally showed up with a few small bottles of water and some crackers.

“It didn’t bother them that we had been attacked the night before. They just said: ‘defend yourselves.'"

Reyes and three other men decided to push into the city center.

“It took four hours to reach the government evacuation center because it was impossible to see where the road was anymore. There were hundreds of bodies everywhere. Later on, we came across groups of men — some had guns. They were breaking apart the metal security doors of stores,” he said.

Reyes says his own group broke into an electronics shop. Once inside, he grabbed a few rice cookers and a DVD player.

“We heard shots from inside. We didn’t know if it was criminals, army or shopkeepers defending their goods,” he said. “The Bible says: ‘Though shalt not steal,’ but my family needed to drink and eat.”

Reyes says he traded his loot to a group of “thugs" for old rice and a small bottle of water.

Reyes woke to the overwhelming stench of putrefying bodies — again.

Again, they were out of water, and again they were thirsty and hungry.

“The people in the house talked about the storm. They were always talking about it. I didn’t want my children to hear any more stories about death. I was worried about them. Lieza [9] hadn’t even mentioned her mother since she was swept away,” he said.

By now, the former motorcycle mechanic had abandoned hope that assistance would come. He and the three other families left for the airport.

“I carried Lieza on my back and held Roxanne [13]. It took hours to navigate through the wreckage and debris. We saw foreign camera crews and aid workers in SUVs. None of them stopped. I’m not sure I would have either,” said Reyes.

People became desperate, and fights broke out among those limping along. The sick and injured dropped out. Family members became violent when they couldn’t scavenge or barter for food and supplies.

Thousands jammed into the splintered airport, which had been converted into a makeshift hospital.

“There were aid workers, but the only time I smiled was when I saw American troops. At least they made us feel safe,” he explained.

Commercial and military flights were operating, but there were also thousands of people queuing for them. Most had waited for days, hoping to file into one of the cavernous hulls of a C-130 military plane and on to relative safety.

“I had about 6,000 pesos. It was all I had. I couldn’t believe the airlines were charging for flights. I told the airline representative that I was angry. She just shrugged and told me we were numbers 246-248 on the list."

For the first time in close to a week, Reyes slept for more than 20 minutes at a given time.

That morning, Reyes was given three tickets by a European aid worker who had decided to stay on.

“I should’ve been happy when we took off. How could I be? I’ve lost my wife, my daughter and my home. I’ve no idea how my other family members are. My job’s gone and I have no money. Who would be?” he said.