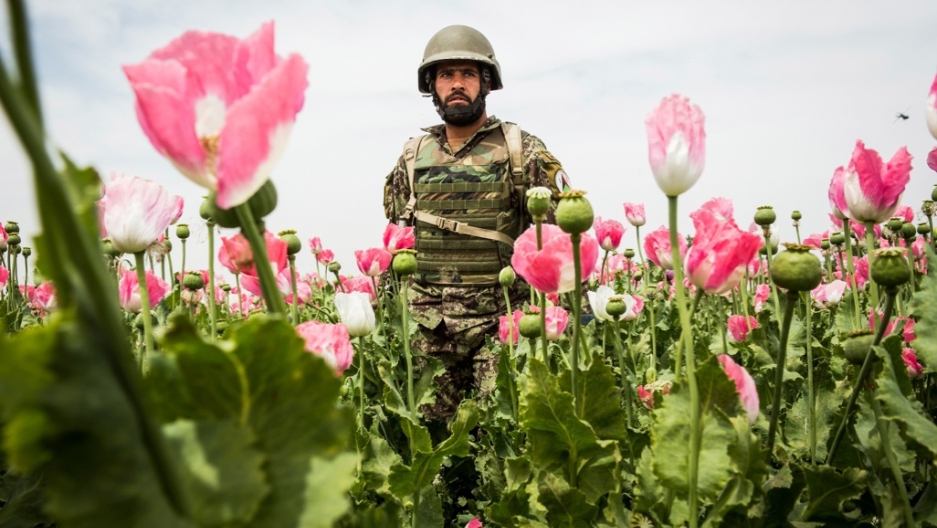 An army soldier walks through a poppy field during a joint patrol with the US Army near Pa'in Kalay in Kandahar province.
Credit: Andrew Burton
Share

First, the bad: 2013 has been an all-time record year for Afghan poppy farmers, according to a new report by the United Nations Office on Drugs and Crime (UNODC). The area under cultivation grew by 36 percent over 2012, which helped opium production soar by a whopping 49 percent despite adverse weather conditions and lower yields.

The good news is, it apparently could have been much worse.

The same report lauds Afghan counternarcotic institutions, which “have taken a significant step forward [and have] … tripled their effectiveness over recent years.”

One shudders to think what the totals might have been with a less “effective” anti-drug brigade.

Afghanistan produces more than 90 percent of the world’s supply of illicit opium, the main component of heroin.

The poppy crop’s farm gate value is $950 million; the total value of exports is exponentially higher — between $3 billion and $4 billion, an astronomical sum in a country whose GDP hovers around $18 billion.

Most of the end product stays right in Asia, with a large part of the heroin being smuggled through Tajikistan into Russia.

Another significant portion goes to Iran, where the Taliban exchange drugs for guns along the two countries’ common border.

Relatively little ends up in the United States, which gets most of its drugs from Colombia and Mexico.

The drug trade fuels corruption within the government and law-enforcement institutions, gives the Taliban a lucrative source of “tax” revenue, and is responsible for a skyrocketing drug addiction rate within Afghanistan itself.

More GlobalPost analysis: Should the US send more aid to Afghanistan? It's complicated

The report speculates that the increase may have been driven by “the withdrawal of international troops and the forthcoming [Afghan presidential] elections in 2014, which led farmers to try to hedge against the country’s uncertain political future.”

Since 2002 the United States has spent nearly $7 billion on counternarcotics efforts in Afghanistan.

But with the international engagement in Afghanistan now winding down, the abject failure of the anti-drug program could hardly be more obvious.

There are numerous reasons for this. In a very real sense, the US, which is the leader of the international coalition in Afghanistan, with 60,000 of the 86,000 troops in country as of October, has not been overly interested in a hard-hitting effort directed against drug lords, some of whom were at least occasional allies in the “war on terror.”

Drug production went from a low of 8,000 hectares under cultivation in 2001, following a Taliban ban on planting, to a record high of 193,000 hectares in 2007. It plummeted in 2010 due to a mysterious blight that wiped out more than a third of the crop.

Poppy has now revived, and this year 209,000 hectares were planted — more than half a million acres, or two-thirds the size of Rhode Island.

In her US Senate confirmation testimony in 2009, Secretary of State-designate Hillary Clinton ruffled feathers in official Kabul by calling Afghanistan “a narco state” whose government was “plagued by limited capacity and widespread corruption.”

Things have only gone downhill since then.

The counternarcotics minister in this banner year was Zarar Moqbel, who has had a long and controversial career in the Afghan government. He briefly served as interior minister, but the incompetence and corruption of his tenure provoked such an outcry from the international community that President Hamid Karzai was forced to sack him in 2008.

He popped up again in 2010 to lead the counternarcotics effort, prompting the UK’s Guardian newspaper to talk about “a new opiate twist to the old saying about foxes and hen houses.”

At the end of October, Moqbel stepped down as anti-drug czar — not in disgrace, but to take over at the Foreign Ministry.

In 2007, Thomas Schweich, the Missouri state auditor who was then serving as US coordinator for counternarcotics and justice reform in Afghanistan, published a piece in The New York Times that lifted the veil on official drug corruption in Afghanistan.

“A lot of intelligence … indicated that senior Afghan officials were deeply involved in the narcotics trade. Narco-corruption went to the top of the Afghan government,” he wrote.

The list of Afghan officials widely rumored to be involved in the drug trade includes provincial governors, prominent parliamentarians, and even the president’s own brother, Ahmed Wali Karzai, who was killed in 2011.

But the US was happy to turn a blind eye to the underground industry until it became apparent that drug money was financing the insurgency.

Gen. Dan McNeill, commander of the NATO forces in Afghanistan in 2007-2008, estimated that 40 percent of the Taliban’s funding came from drugs.

“When I see a field of poppy, I picture those stalks as AK-47s waving in the breeze,” he said in a 2008 interview.

No one really knows how much the Taliban gets from drugs; the only thing that’s sure is they are skimming a small percentage from a very big pot of cash.

According to Foreign Policy magazine, “the Taliban take 2 to 12 percent of a $4 billion industry; farmers, traffickers, smugglers, and corrupt officials collectively earn much more.”

So many people have such a large stake in keeping the poppy industry going in Afghanistan that it will be almost impossible to stop.

Not that anyone was trying very hard.

The outreach centered on gruesome posters showing the dire effects of drugs, combined with an appeal to local mullahs, who were encouraged to preach that poppy was “haram,” or forbidden by Islam.

But local reporters in Helmand, the poppy heartland, reported in 2007 and 2008 that many preachers were doing just the opposite.

“Poppy is the answer of southern Afghanistan,” said one mullah who did not want to be named. “Foreigners make wine and send it out to the world. We have poppy. They kill our people, then tell us not to grow poppy. But we will not obey their orders. We will not be their slaves.”

Justice reform never really caught on, either: as recently as July, corruption watchdog Transparency International released a survey showing that Afghanistan’s judiciary was considered the most corrupt institution in this notoriously corrupt state.

Eradication was abandoned in 2009, when the Obama administration deduced that it was just driving farmers into the arms of the Taliban. Certainly the new, improved Afghan counternarcotics forces did not pick up the slack — the UNODC report shows that a mere 7,348 hectares were eradicated in 2013 — just 3.5 percent of the total.

Interdiction was also a bust: Too many high-profile people were caught and then had to be sprung by top government officials.

The report does state that the Afghan police have been able to intercept 10 percent of the illicit crop — triple their previous levels. But “Afghanistan is still far from achieving the seizure rate witnessed in other producing countries.”

That leaves alternative livelihoods — the attempt to wean farmers off poppy production by giving them other crops to grow.

Poppy, according to the UNODC report, yields about $4,500 per hectare. Programs such as the one by Central Asian Development Group in Helmand, which helped farmers make model plots full of tomatoes, cucumbers and chili peppers, could not hope to compete.

Afghans knew where their interests lay, no matter what the foreigners told them.

As Afghan expert Barnett Rubin wrote years ago, the opium poppy industry, as unwelcome as it may be, is a sign of Afghan entrepreneurial skills — a “high-capacity adaptation to indescribable devastation.”

In a country with little or no modern infrastructure, in a state of war, Afghans have developed a multibillion-dollar-a-year business, creating a value chain that includes credit, futures contracts, and access to markets.

As Rubin put it, “Sometimes when a consultant tells me that Afghans lack capacity, I try to imagine [him] being forced to survive in Uruzgan province with two jaribs of land and a goat … I wonder if he could transform a local conflict incomprehensible to outsiders into a million-dollar business funded by superpowers that have been convinced they have existential stakes in the outcome.”

Dick Scott, a retired US Agency for International Development official who has been involved with Afghanistan for more than 40 years, has a similar view.

”Opium from the start had a reliable, accessible market, good prices, an informal credit system, all of which the counternarcotic programs failed to compete with,” he said in an interview with GlobalPost. “The combination of corrupt government officials, the police and the insurgents all profiting off the crop does not help.”

After 12 years, tens of thousands of lives lost and hundreds of billions of dollars spent, the one lasting “achievement” of the international intervention might well be propelling Afghanistan into the stratosphere of narco states.