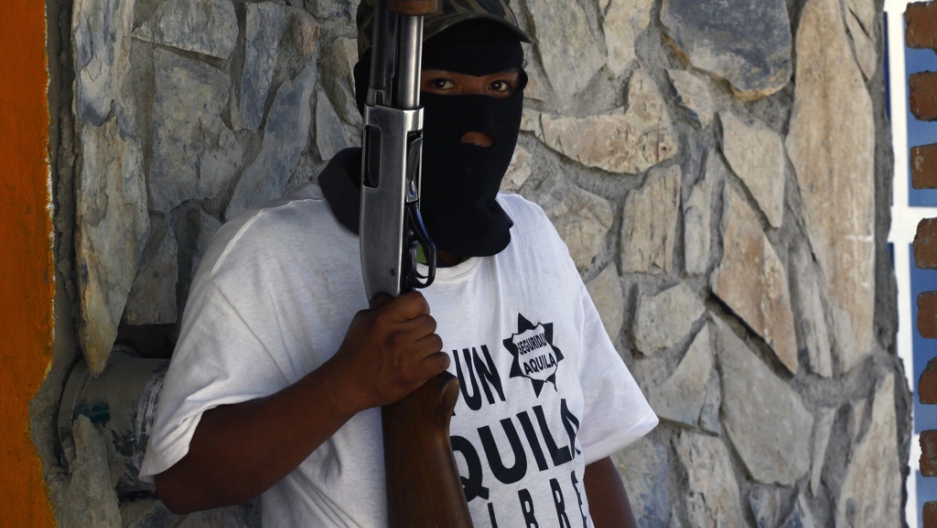 Local militia fashion is all the rage in Michoacan these days.
Credit: Hector Guerrero
Share

MEXICO CITY — Seven years after the government launched a military campaign against Mexico’s criminal cartels there, the Pacific coast state of Michoacan remains among the biggest obstacles to pacifying Mexico.

President Enrique Pena Nieto this month dispatched federal police and troops to seize the port at Lazaro Cardenas. The port, Mexico’s third busiest, has been used to smuggle meth ingredients into Mexico and ship illicit iron ore shipments out.

“This was seen coming and absolutely nothing was done about it," Mexican Interior Secretary Miguel Angel Osorio told a radio interviewer Tuesday about Michoacan’s precarious security. “This will be an issue for many years. As part of the strategy there will be other actions to recover the state and return it to the citizens.”

The pressure increased on officials in late October, as well-armed self-defense militias from towns that had risen up against the Templars attempted to “liberate” the city of Apatzingan, considered the gang’s bastion. Disarmed by the army outside town, the militiamen were fired on by gunmen when they held a rally in Azpatzingan’s central plaza.

Patino has called Michoacan “a failed state,” in some of the harshest language clergy or other leaders have used to described Michoacan.

State officials struggled to refute Patino, who suggested in his missive that they've been either unwilling or unable to bring the gangsters to heel.

“We shouldn’t become bothered or angry when declarations are made like those of the bishop,” Michoacan Gov. Fausto Vallejo told GlobalPost in a phone interview. “In part, he’s right. In other respects, we’ll have to talk to him because he’s wrong. When he says the state and municipal governments are infiltrated, we have to review that.”

Mexican media also have been hammering on the state’s insecurity, corruption and vice.

– Millions of dollars worth of illegally mined iron ore is being shipped to China through Lazaro Cardenas.
– The Knights Templar are spending $25 million a year to bribe military commanders and government officials.
– The gang’s extortion network now plagues farmers, industries and merchants in two-thirds of the state’s 113 counties.

GlobalPost was unable to verify the media allegations.

“There has been a process of decay,” said Miguel Angel Chavez, state president of the center-right opposition National Action Party, which has called for the governor to step down. “This administration hasn’t been capable of resolving the situation. This has been a government that hasn’t really coalesced. This has all combined to ensure that organized crime takes hold here.”

More from GlobalPost: Michoacan town mayor who cried out for help against gangs found dead

Renowned for its limes, avocados and other produce, Michoacan also has long been a hub for drug production and trafficking as well as other vices. In the past decade, it’s become Mexico’s foremost producer of methamphetamine, with precursor chemicals easily imported from Asia through Lazaro Cardenas seaport and clandestine labs sprouting in remote mountain communities.

The Knights Templar started in 2011 by a split within La Familia Michoacana organization, which itself was spawned by collapse of earlier criminal gangs.

Then-President Felipe Calderon, a Michoacan native, deployed thousands of troops to Michoacan upon taking office in December 2006. That was shortly after La Familia had shocked the world by throwing the heads of six alleged Zetas cartel gunmen on the floor of a nightclub.

Many blame that deployment for fanning out the gangland warfare across much of Mexico, in which often videotaped beheadings have become commonplace.

La Familia gunmen drove the Zetas and Gulf Cartel gangs from northeastern Mexico out of Michoacan more than seven years ago. The Templars now are fighting both La Familia remnants and a group aligned with Joaquin “El Chapo” Guzman’s Sinaloa Federation gang in parts of the state.

Adopting their name and imagery from a medieval Catholic order of Crusaders, the Knights Templar attempt to justify their rampant extortion demands as collecting “war taxes” to defend the state against outside gangs.

The meth trade continues as a mainstay of Templar income, with much of the drug produced here sold to US consumers. But extortion and the smuggling of all kinds of products through Lazaro Cardenas have become increasingly important, a government security analyst in Morelia, the state capital, says.

“That’s why they’ve gone after the port,” the analyst told GlobalPost, speaking on condition of anonymity, following the seizure of the port last week by federal forces.

The rise this year of the anti-Templar militias now has only added to the insecurity. Suspected Templar gunmen attacked power and gas stations across the state after the militias rallied in Apatzingan on Oct. 26.

And now, rather than focusing on “self-defense,” the militias seem intent on prying the Templars’ control from other towns.

“It’s a matter of revenge now. They talk about defending themselves but then attack as well,” the Rev. Javier Cortes, who’s second in command of Apatzingan’s far-flung diocese, said of the self-defense militias. “That brings a lot of violence.

“The Tierra Caliente has a lot of work ahead of it,” he said.