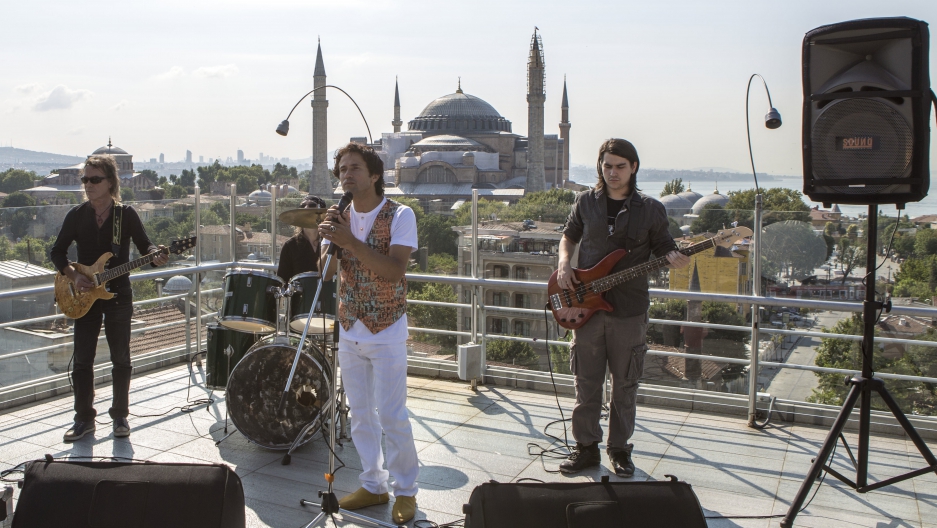 ISTANBUL, Turkey — In a small music studio on the city's outskirts, Ahmet Muhsin Tuzer is recording the last tracks of his rock band’s debut album.

The 42-year-old with a shaved, boyish face sings passionately: “Not much time left, something new coming soon, when the time of change comes, all this pain will end.”

Seeing Tuzer’s long hair, skinny jeans and black T-shirt, you wouldn’t picture him leading prayers in a mosque. But that’s exactly what this imam does in a tiny village in southern Turkey called Pinarbasi.

That’s when he’s not singing with FiRock, the band he formed several months ago.

Now dubbed the Rocking Imam, he says his friends convinced him to do it. “I wouldn’t have even imagined I’d form a band,” he explains in his soft-spoken voice.

Tuzer, who started singing as a child, says his idol was Freddie Mercury and that he admires Pink Floyd. He kept those tastes after he became an imam at the age of 19, following in the steps of his father and grandfather.

More recently, he became interested in Sufism, a branch of Islam whose followers believe in a mystical union with God. “Before, I saw God and myself as separate,” he says. “But in mysticism, everything is God.”

His next step was to put his two passions together: Islamic mysticism and rock music.

That happened last May, when he met heavy metal guitarist Dogan Sakin in the town of Kas, near Pinarbasi, and they formed FiRock. The symbol “Fi” represents the golden ratio in mathematics — or divine proportion — between two things.

"Psychedelic, mystic rock,” Tuzer says, “every one was shocked, believe me.”

Istanbul-born Sakin, a 53-year-old veteran of the Turkish rock scene, looks like your prototypical heavy metal guitarist. Thin, with long, salt-and-pepper hair and a gray goatee, he wears black jeans and boots.

Chain-smoking outside the recording studio, he speaks in a hoarse voice. “I believe in being in contact with God directly from deep inside,” he says. The imam, sitting next to him, says the rock guitarist is a mystic in his own way.

Joined by two of Sakin’s colleagues, the band posted its first song on YouTube in July. “Come to God” has racked up more than 30,000 views.

A month later, FiRock held its first concert in Kas, during which Tuzer wore his imam’s robe on stage in front of a thousand people.

It was a success. Tuzer says FiRock has since been invited to perform in Tunisia and the United States.

But others were less pleased.

After the concert, the Department of Religious Affairs (known as the Diyanet) launched an investigation. Tuzer has also received threats online.

Diyanet spokesman Abdulkadir Ozcan said the organization will decide whether or not Tuzer must quit his band.

“Maybe the Diyanet will initiate an Islamic band and then he will be transferred there,” he said. A decision may take up to several weeks.

The Dinayet has a say because it manages all imams, who are public workers in Turkey. The organization, which runs the more than 80,000 mosques across the country, sends imams what to read to their congregations each week, which in Tuzer’s case amounts to two dozen people.

The issue of music in Islam remains an open question, however. Many Islamic scholars say all forms of music are haram — forbidden — with the possible exception of the tambourine during weddings. Others argue it depends on the content.

The investigation worries the Rocking Imam. “Where’s the Devil in my music?” he says. “If the Prophet Muhammad were alive today, I’m sure he would approve of what I'm doing.”

“I don’t care about the Diyanet!” he says. “It makes rules that aren’t in the Quran, then makes people afraid by telling them they’ll go to Hell”.

The Diyanet recently issued a fatwa, or decree, that Islamic law forbids tattoos and discourages earrings and other jewelry for men as “almost illicit.”

Sakin, who sports a large tattoo on his right arm and a small one on his left hand, laughs about the decison.

Tuzer isn’t new to controversy. He made news in Turkey in 1999 by marrying a Christian woman from Romania while he was the muezzin — who proclaims the call to prayer — at a mosque in Istanbul’s historical Sultanahmet district.

She later converted to Islam and is currently writing a book about Sufi mysticism.

After the Diyanet disapproved of his marriage, Tuzer quit in 2000 to work as a trader selling Islamic calligraphy and art. He also founded a small company that sold organic tea.

He became an imam again in 2010 after convincing by his father.

With his job at stake once again, Tuzer is looking forward to FiRock’s first album, “Time of Change,” due for release later this month. He says he’d like to sing with Madonna someday.

“Imagine: the imam and Madonna,” he says. “If that project becomes real, all the world’s religions would unite.”