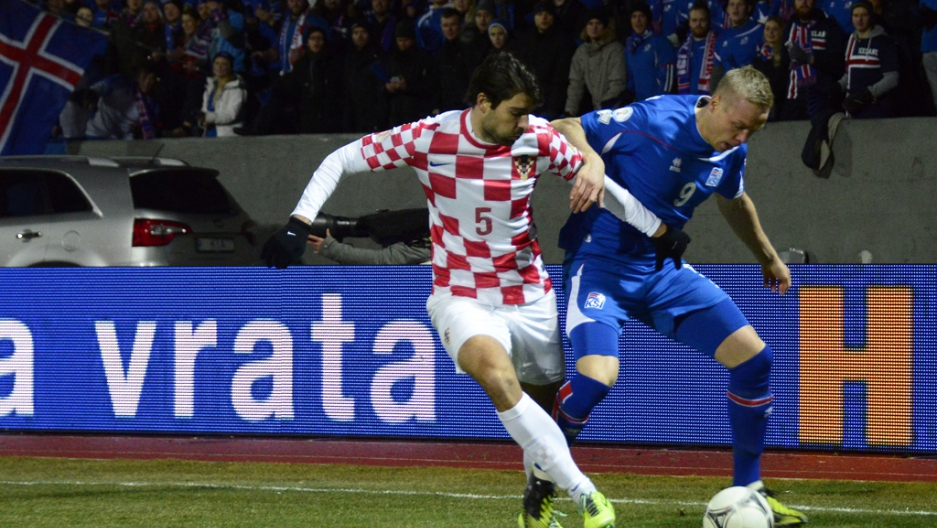 Iceland’s recipe for soccer success is risky, but ultimately rewarding. All you need is a total collapse of your currency and economy.

At least that’s the picture painted by those at the center of this unlikely sporting renaissance, which continued Friday night in the capital Reykjavik against seasoned Croatia.

Iceland is now one game away from becoming the smallest nation ever to advance to a World Cup. The team finished second in its group during European qualifying, and has advanced into a do-or-die scenario against Croatia.

The teams played to a 0-0 draw, meaning it all comes down to who wins Tuesday in Croatia. The Croatians generally controlled play, and enjoyed the lion's share of scoring chances, but the home team withstood the challenge as fans chanted throughout.

The result is even more unlikely given Olafur Skulason's red card ejection five minutes into the second half. Icelandic goalkeeper Hannes Halldorsson deserves accolades for his play.

“It’ll put us on the map,” Iceland’s captain, Aron Gunnarsson, told the Wall Street Journal, before the game. “People will notice us a bit more.”

Mostly, they’ll be asking: “How did Iceland make it this far?”

Well, it started in 2008 when the national economy, under the weight of an inflated currency, tanked.

They took advantage, getting the experience they needed at home to impress visiting scouts. Now, Iceland’s top players are playing in places like England and the Netherlands.

But isn’t it permanently dark and cold in Iceland?

Well, they didn’t name it Iceland for tourism purposes. When the superheated economy allowed, the national program built infrastructure.

Indoor, heated stadiums popped up, and players had the chance to train year round.

That hard work also convinced top-flight coach Lars Lagerback, who led teams in his native Sweden and Nigeria to World Cup appearances, to accept the job of steering Iceland.

“He succeeded in sharing his experience, and brought us a new philosophy,” Gunnarsson told the New York Times. “He believed we have huge potential, despite the small size of our country.”

Canada, by comparison, has more people playing soccer recreationally (nearly 2.7 million) than there are people in all of Iceland (325,000). Ireland is one frustrated World Cup nation that has taken notice. At least the fans have.

Eoin Conlon and friends were lamenting their country’s failed attempt to reach Brazil when he realized there’s only one nation that deserves their support now.

“And we kind of laughed, saying: ‘Well, that’s as close as Ireland's going to get to Brazil. It's only a letter difference. A ‘c’ for an ‘r.’ We might as well be brothers,’” Conlon told Public Radio International.

So they struck up a website and Twitter profile to encourage Irish football fans to back tiny Iceland.

“There are only about 320,000 people in Iceland,” Conlon told PRI. “So if they were a county in Ireland — I'm calling them the 33rd county — it would [be] only the fifth-largest county in Ireland. It’s incredible the success they’ve had. And I hope it continues.”