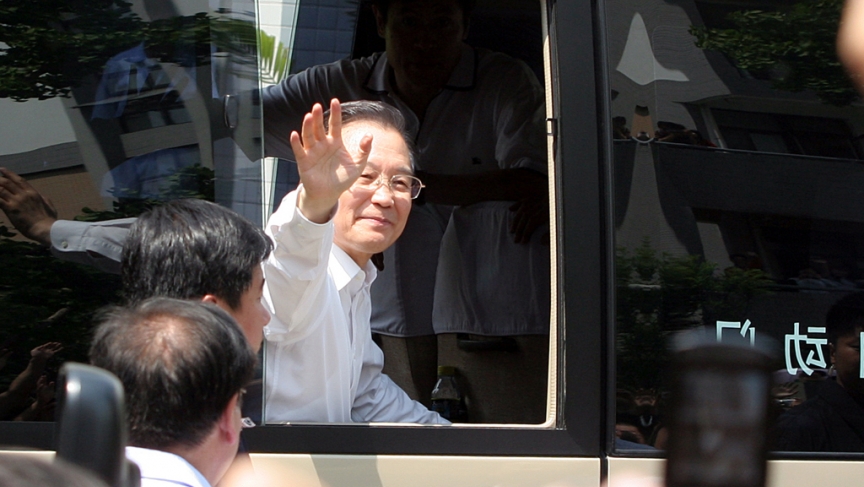 A new report alleges that JPMorgan Chase hired the daughter of former Chinese Premier Wen Jiabao, pictured, in order to improve the company's status and standing in the country.

JPMorgan Chase secretly recruited the daughter of China's former prime minister, Wen Jiabao, as part of a bigger strategy to gain influence with the country's ruling elite and promote the bank's status in China.

According to The New York Times, JPMorgan paid a consulting firm run by the prime minister's daughter, Wen Ruchun, who used the fake name "Lily Chang." All of this comes to light as US authorities are investigating the bank and its practices. Wen Jiaboa was prime minister at the time.

New York Times reporter Ben Protess, who has been reporting on the story, says it's common for banks in China to try and gain influence by hiring the children of the ruling elite. But what's unusual in this case, he says, was that it was the child of the prime minister — and she chose to use an alias, rather than her real name.

"It's unclear who decided to do it that way. She used this alias and JP Morgan knew the alias was not her real name, and yet went about doing business with her to the tune of a $75,000 a month contract," says Protess.

He says both had much to gain from the relationship. Wen received the money and the prestige and influence that comes with working for a company like JPMorgan.

"Certainly, the ability for JPMorgan to secure this kind of person on your payroll is a huge coup and potentially opens doors for the bank [with] the leaders of China."

So what did Wen do? Protess and his colleague obtained a letter outlining how Wen and her consulting firm helped broker an underwriting deal for the bank in China at a state-owned railway company. She also helped advise the bank on the macro-economic policies in China.

"The idea is, you had on tap, on the payroll, somebody who was able to help you navigate this booming country and that could potentially open the door to big business," Protess says.

This practice is taken as business as usual in China, according to Protess. But in the US, it's part of a multi-faceted government investigation into JPMorgan's hiring practices in China that might involve dozens, or perhaps hundreds, of current and former Chinese government officials and their families.

"This is a major investigation that presents an important threat to the bank," Protess adds.