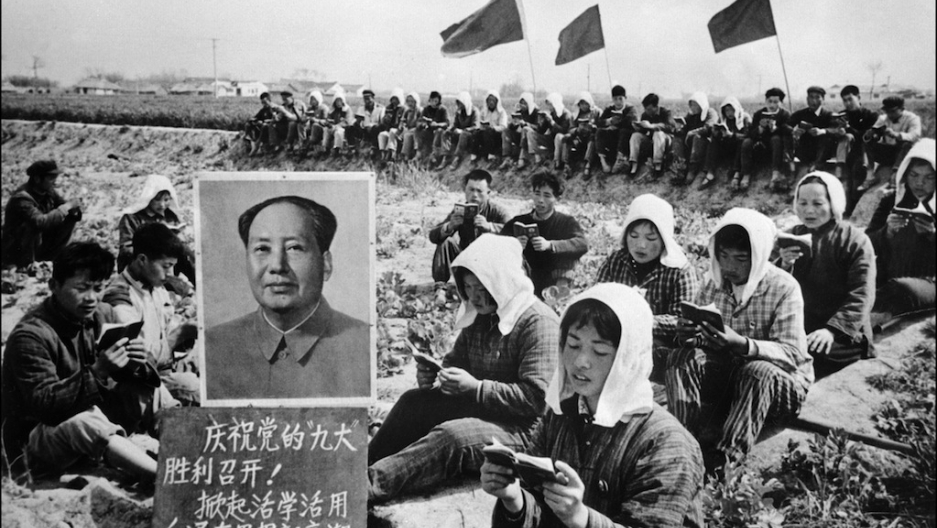 Picture released in 1969 by Chinese official news agency of Chinese peasants reading Mao's Little Red Book amid a photo of the Communist Leader. Forced confessions were common at the time. Some see echoes of the Cultural Revolution in recent "forced" confessions on TV.
Credit:
Share

HONG KONG — During the traumatic days of China’s Cultural Revolution, public confessions were a favorite tactic for eliminating political enemies.

After all, the Maoist wisdom ran, why bother with a trial when a coerced confession is so much more reliable and efficient?

That logic seems to have made an unfortunate comeback in China.

Since August, at least six people have been hauled before China’s state-owned network CCTV to give primetime confessions — most without having been charged of any crime.

A pattern has emerged. In each case, the “suspect” is brought out in a prison uniform. (All but one so far have been male.) Sometimes he has a shaved head, sometimes he's accompanied by police. Then he bows his head, clasps his hands, and repents for various misdeeds.

The most recent case is that of Chen Yongzhou, a journalist at the southern newspaper New Express. After publishing a series of investigative articles accusing the construction equipment company Zoomlion of cooking its books, Chen was seized on October 18 by police who had crossed the border from neighboring Hunan province. (The Hunan government is a partial owner of Zoomlion.)

A week later, he appeared on national TV in a prison jumpsuit. Head bowed, with armed guards by his side, Chen confessed that he had taken bribes to slam Zoomlion because he “yearned for money and fame.”

Many online commenters believe the confession was coerced.

In a video released by CCTV, Chen’s neck had a red mark that many interpreted as a sign he had been tortured. Even if Chen is guilty of accepting bribes and publishing false allegations, the nature of his arrest has left a bad taste for legal observers.

“From now on China can get rid of its court system,” wrote one social critic on Sina Weibo, China's Twitter. “Just detain the people you say are guilty for a few days, put them on CCTV, and make them confess.”

“When someone has been deprived of their personal freedom, and when they are escorted out in prison garb and in handcuffs by a pair of brawny police officers — to say that they are consciously and willingly confessing their wrongs in their own words wouldn’t fool even a three year-old child,” said Wei Yongzheng, a media commenter and law professor at the Communication University of China, in a translation by the China Media Project.

While it’s unclear whether Chen did take bribes for his reporting, it’s true that bribery is rampant in Chinese journalism. In a scathing editorial on Chen’s case, Hu Shuli, the doyenne of business reporters in China, said the imbroglio was “a self-inflicted wound on the media industry” and a sign of how corruption is “a stubborn illness affecting a considerable number of news organizations and reporters.”

Chen’s case is merely the most recent confession.

Prior to him was Charles Xue, a Chinese-American investor and social media celebrity with over 12 million followers on Sina Weibo. In August, Xue was detained by police in the midst of a crackdown on online commentators. Shortly thereafter, he appeared on a CCTV admitting he had hired prostitutes. He later gave another confession denouncing his online writing. His criticisms of the government fed his ego, he said, and made him feel like an “emperor of the Internet."

After Xue came Peter Humphrey. A British citizen who ran a Shanghai company that did due-diligence on Chinese companies, Humphrey was detained for seven weeks before he confessed.

Then in mid-September, he and his wife were trotted out in orange jumpsuits on CCTV. Holding up his handcuffs, Humphrey said he "used illegal means to obtain personal information" and apologized to the Chinese government.

For many people, the trial-by-TV trend is an uncomfortable reminder of China's past.

During Maoist "rectification" campaigns, people deemed politically undesirable were coerced to make public confessions in order to "educate" the masses. On social media, netizens have shared cartoons showing Chen Yongzhou wearing a red Young Pioneers scarf, a Communist Party symbol, in the place where his neck showed a scar.

Another popular cartoonist called Rebel Pepper drew a picture of a man strung up in the middle of the CCTV building.