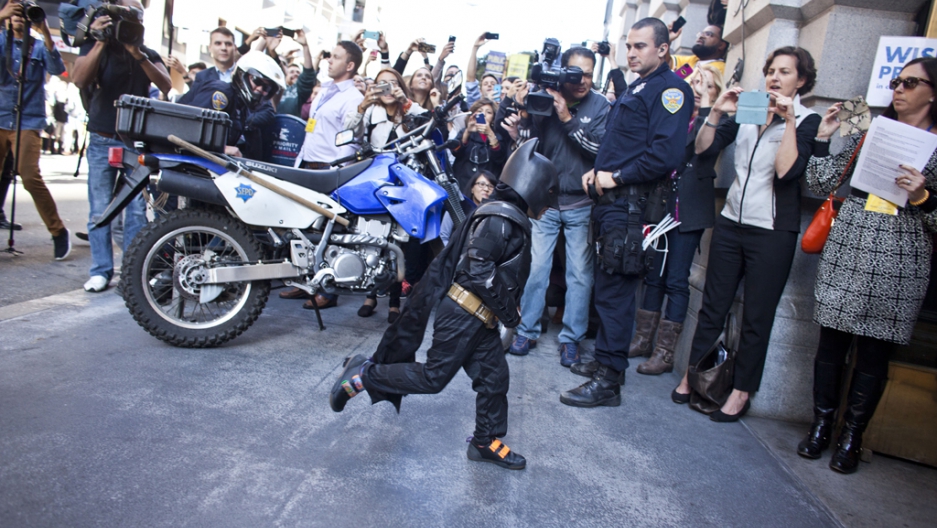 Five-year-old leukemia survivor Miles, also known as BatKid runs into a former bank vault to arrest the Riddler on November 15, 2013 in San Francisco. Make-A-Wish Greater Bay Area foundation turned the city into Gotham City for Miles by creating a day long event to bring his wish to be a BatKid to life.
Credit: Ramin Talaie
Share

San Francisco is safe again all thanks to Batkid.

Five-year-old Miles, stepping in to help Bruce Wayne, freed a damsel in distress Friday morning after getting an urgent call from Commissioner Gordon.

So daring were his feats, and so perilous was the fate of the city, that CNN Headline News interrupted to bring live coverage, and the Gotham Chronicle printed a special edition.

Word on the street, however, had more danger lurking around the next corner.

Sources told ABC News in San Francisco that The Penguin was targeting Lou Seal, the mascot for the San Francisco Giants baseball team.

It didn't take long for The Penguin and Lou to appear near AT&T Park.

After watching his co-conspirator nabbed by Batkid, The Penguin (aka Oswald Chesterfield Cobblepot) took to the streets in an effort to evade capture.

“We’ve been chasing Nigma and Cobblepot for years and just when I was about to give up hope that we would ever bring them to justice, wouldn’t you know it – Batkid shows up and saves the day,” said United States Attorney Melinda Haag. “I’ve been involved in some unbelievable cases, and I’ve worked with some pretty remarkable law enforcement officers, but the bravery displayed by Batkid is off the charts. I’m absolutely certain that there is no villain this remarkable super-hero can’t defeat.”

Batkid stared down the danger with his usual steely nerves. After all, he’s all-but defeated cancer. After battling leukemia for more than three years, Batkid beat the dastardly disease into remission earlier this year.

Batkid's exploits even caught the attention of a proud President Barack Obama.