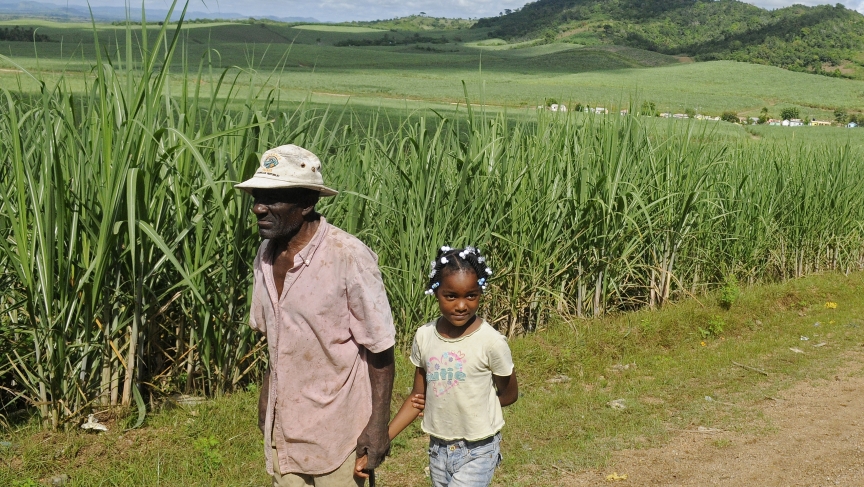 Leguisie Louis (L), a farmer, was born in Haiti but moved to the Dominican Republic in 1959. He's seen here walking with his granddaughter, Maxileidy. A court ruling will effectively strip families of Haitian immigrants, like this one, of their Dominican nationality.

Tens of thousands of people in the Dominican Republic are being stripped of their citizenship, on the grounds that they or their ancestors were illegal immigrants.  Thousands have already been deported across the border to Haiti, because it iss assumed all illegal migrants come from there.

The court ruling applies to anyone whose family arrived in the country after 1929 and can't document their status. Being born in the Dominican Republic doesn't make a difference.

Some are calling it the latest manifestation of "anti-Haitianismo" in the Dominican Republic. Both countries are on the same island of Hispaniola.

Their relations are a story of race, identity, and money. The Dominican Republic is not a rich country, but it's a lot better off than its neighbor, Haiti.

Haitians are different from their Dominican neighbors in several ways. Firstly, language: most Dominicans speak Spanish, while most Haitians speak Creole, based on French. Then, there's the issue of race.

Haiti is overwhelmingly black; whereas Dominicans identify more with the European part of their heritage, rather than the African part. Most Americans would describe most Dominicans as black. And DNA tests taken over the last decade confirm that most Dominicans have black ancestry in their family history to varying degrees.

But race in the Dominican Republic and in other parts of the Caribbean does not mean the same thing as it does in the United States. Dominicans use a variety of words to self-identify, such as moreno, trigueno, and blanco-oscuro, indicating different colors or different types of mixed racial origins. But not many will choose the term "black."

So how did this come about? What are the roots of the differences between Haitians and Dominicans?

Haiti was once a French colony, with its economy based almost exclusively on plantation slavery. What's now the Dominican Republic was Spanish. There were slaves on both sides of the island, but the society and economy on the Spanish side were more diverse, with cattle ranches and mines just as prevalent as sugar plantations.

At the end of the colonial era, black slaves made up 90% of Haiti's population, while less than half of Dominicans were Africans in bondage. Both societies were deeply stratified by race, but most of the whites and many of the mixed race people fled Haiti during the Revolutionary era beginning about 220 years ago.

The African slaves in Haiti fought and famously won their freedom and independence. They were able to project their power into the Spanish part of the island, and Haiti took control of the Dominican Republic for a generation. Some say the elite in the Dominican Republic still feel stung by the insult of having had to answer to Haitians in that era.

Relations between the countries through the early 1800s were long, complicated and bloody. But the key event was the long War of Independence fought by Dominicans against Haiti, which began in 1844. It's the longest war in the Republic's history.

For a generation from 1930, the Dominican Republic was run by dictator Rafael Trujillo, who made anti-Haitianism more or less official policy. His regime put great stress on the country's European, as opposed to its African, heritage. That may not be surprising given the prevalence of racial theories in the 1930s, both here and elsewhere.

In the Dominican Republic, European and Lebanese immigration was encouraged. Trujillo was mixed race himself and used make-up to appear lighter skinned in public. Some historians claim he had a Haitian grandmother, but if true, that didn't stop him from whipping up hostility toward Haitians and darker-skinned Dominicans.

This prejudice occasionally turned deadly. The worst episode was a genocide in the border area in 1937, when an estimated 20,000 Haitians were killed in a few days. Deportations were also common. Dominicans of African appearance, even with roots in the country from before independence, were swept up in the deportations.

Ironically, the Dominican government needed cheap labor, so it organized migrant workers to come in, including from Haiti, and work on state-owned plantations and construction projects. It still needs the extra labor. That's the ambivalence of anti-Haitianism — the country needs cheap workers, but doesn't want them to become a permanent part of society.

Yet the Dominican government in Santo Domingo vehemently denies charges of racism in its policies.

But in 2007, a report prepared for the United Nations' Office for the High Commissioner for Human Rights described what it called a "profound and entrenched problem of racism and discrimination in Dominican society, generally affecting blacks and particularly such groups as black Dominicans, Dominicans of Haitian descent and Haitians.

"While there is no Government policy of racism and no legislation that is on the face of it clearly discriminatory," it said, there clearly was a "discriminatory impact" from "certain laws, particularly those relating to migration, civil status and ... citizenship."

There may be hope, though, for some reconciliation between people of the two countries. Some Dominicans are joining their Haitian counterparts to object to the new court ruling and the crackdown on Haitian immigrants.