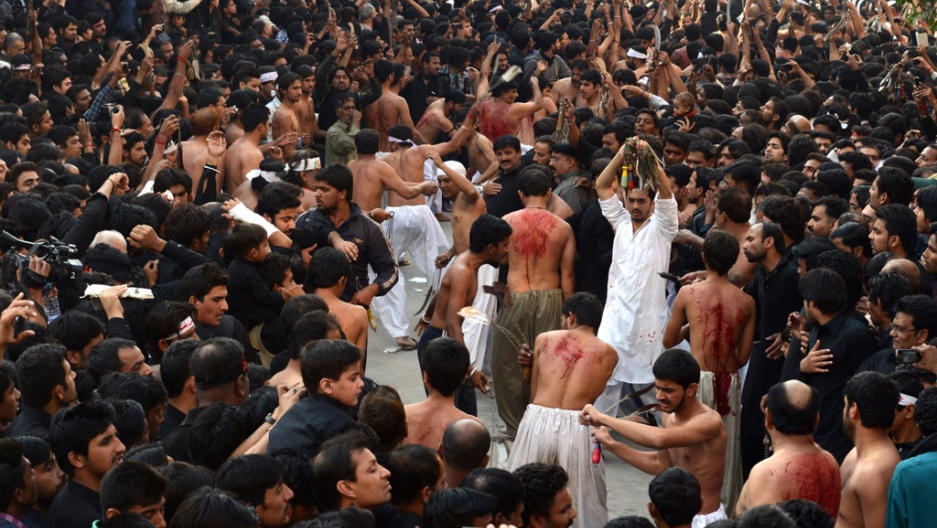 ﻿﻿Pakistani Shiite Muslims participate in ritual self-flagellation during a religious procession held ahead of Ashura on the ninth day of Muharram in Lahore on Nov. 14, 2013. Ashura mourns the death of Imam Hussein, a grandson of the Prophet Mohammed, who was killed by armies of the Yazid near Karbala in 680 AD.
Credit: ARIF ALI
Share

KARACHI, Pakistan — When I was a little girl, my family had a tradition for the tenth day of Muharram.

For the uninitiated, there is a holiday called Ashura observed every year 10 days into the month of Muharram on the Islamic calendar. It marks the last of 10 days of ritual mourning to commemorate the martyrdom of Prophet Muhammad's grandson, Hussein, who was beheaded — here's where it gets a little complicated — in the Battle of Karbala, a fight between the prophet's Shiite descendants and Yazid I, the Ummayad Caliphate whom the Shiites refused to recognize as the leader of Islam.

Back to the family tradition: On the final day of mourning, Ashura, we'd pile into our cars and head to the city center to watch Karachi's Shiite community march through the streets. The marchers, mostly men, wore white clothes and beat themselves with their hands or other objects — including swords, chains and daggers. The "matam" is a way for the mourners to imagine the pain Hussein felt. Their chests were often bloody, their faces twisted with pain.

Still, their religious fervor seemed like a beautiful thing to me, a revealing display of devotion. It was common to see other Shiites weep openly in the streets during the emotional ritual.

Ashura is predominantly a Shiite holiday, but in 1990s Karachi, it wasn't just observed by the minority Muslim sect. Sunnis and Shiites both watched the procession of mourners go by. It was almost like an all-city celebration.

That has all changed.

In 2009, a bomb targeting the annual procession in Pakistan's largest city ripped through the crowd, killing more than 40 people. The Pakistani Taliban — who believe Shiites are infidels — claimed responsibility for the attack.

Tensions between Sunnis and Shiites all over Pakistan were already high. Since the 2009 blast, they've only increased. At the beginning of this year two bombings by militant group Lashkar-e-Jhangvi targeting Shiites in Quetta killed more than 200 people. In March, an attack on a Karachi Shiite neighborhood killed at least 45.

Fewer people will leave their homes to watch this year's big procession, planned for Friday — in spite of security measures like cutting cellular services to prevent terrorists from using the networks to coordinate attacks. Those who will go out can't help but feel tense. Just on Wednesday, 20 people were injured in Karachi after two bombs targeted Shiite mourners.

As a kid, I'd watch the mourners go by while I stood with my family on the sidewalk, absorbed by the power of the experience.

Tomorrow in my neighborhood — a Shiite cooperative housing society — we'll all sit at home, anxious, hoping that the day passes without incident.