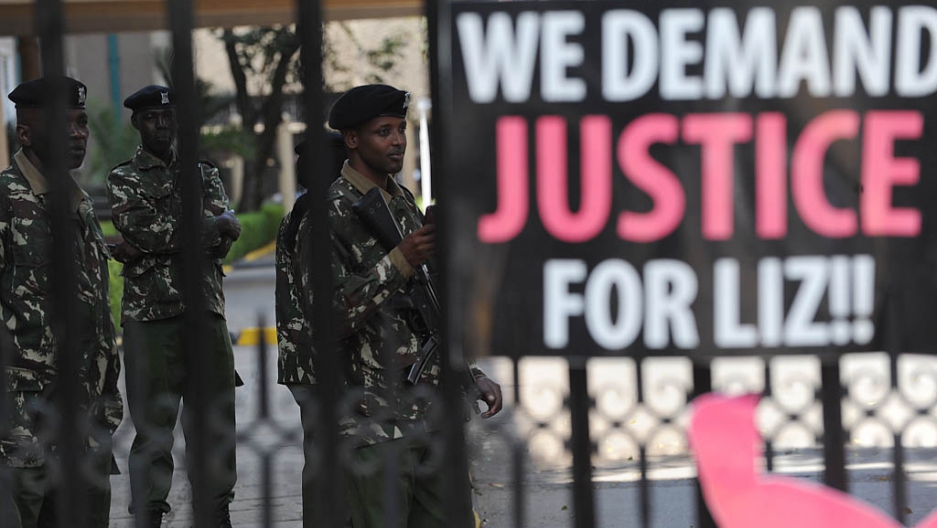 Kenyan law enforcement officers look as several hundred Kenyan protestors march towards the police headquarters on October 31, 2013 in Nairobi to deliver a petition of over a million names demanding justice after men accused of brutally gang raping a schoolgirl cut grass as punishment. The 16-year-old, known by the pseudonym Liz, was reportedly attacked, beaten and then raped by six men as she returned from her grandfather's funeral in western Kenya in June, before the gang dumped her, bleeding and unconscious, in a deep sewage ditch.
Credit: SIMON MAINA
Share

NAIROBI, Kenya — Seline Awinja, one of Kenya’s highest-ranking female police officers, smiles proudly as she recounts the ranks she’s advanced in her 26 years with the force: From constable to corporal to sergeant to senior sergeant to inspector to chief inspector — and now to superintendent of police for Nairobi’s Njiru district.

Awinja, 46, sits at a desk in a tin hut that serves as her command post. Plainclothes officers enter repeatedly to tell her about a dispute unfolding between armed thugs and a landowner over control over a nearby plot of land.

She fires back at them in Swahili, telling them to “bring their big guns” and hold the peace until a judge can be summoned to arbitrate. “Deal with them like a man,” she yells, and sends them off.

As the US military this year lifts its longtime ban on women in combat roles, a similar debate is unfolding within the Kenya Police. In the United States, female American soldiers and their allies argued the ban limited women’s ability to rise through the ranks into the military’s highest positions. In Kenya, a legacy of female officers serving in only secretarial roles has only partially faded: Today only 11 percent of Kenya's 73,000 police officers are women, according to a United Nations estimate.

The estimate is 14 percent in Uganda and 20 percent in Tanzania. And in the United States, the National Law Enforcement Officers Memorial Fund reports, There are more than 900,000 sworn law enforcement officers now serving...which is the highest figure ever. "About 12 percent of those are female."

Recently, female police in Kenya have been called upon to staff 'gender desks' at local police stations to handle cases of sexual and domestic violence of the sort that Kenya's male-dominated police force is notorious for failing to take seriously. Kenya made international headlines last month after police in Western Kenya set free three suspects in the gang rape of a woman known as "Liz" rather than investigate or charge them.

GlobalPost sat down with Awinja to ask what drove her to pursue a position of leadership that few of her female counterparts share — and how she approaches her role.

GlobalPost: As a child, did you always dream of serving in the Kenya Police?

Seline Awinja: When I was in (third grade) there was a poster with a photo of a policewoman with the words “When I grown up I want to be a police officer.”

I looked at that lady and I admired her.

I attended secondary school in Nairobi where my father worked, and in the afternoons I would hang out in the park. Whenever the band was drumming at Uhuru Park it would echo, and I would follow the echoes. And there was this woman who was a drum major. She looked smart, and leading the band at the same time.

GP: Tell us about the day the police came to your hometown to recruit.

SA: I was 19 years old. There were tests and interviews you had to go through, all in one day. There is running, English, fitness. The test that was hardest was the running. For me it was very far.

Afterwards we were given letters to assemble at a particular day. That day they read the names of those who would be picked to the Police Training College. And they read my name.

GP: Were there many women chosen?

SA: We were 24 women out of a group of around 800. Initially they didn’t have women in the police. We were the pioneers of this department.

After the completion of the nine-month course … we were posted to buildings in Nairobi town. From there we started going all over Kenya. I have worked in Eldoret, Kitale, Bungoma, Mumias.

When I was out there in those districts I had been working as a general duties officer. And with that we are like receptionists. Problem helpers. If there is a rape case, they come and report, we want to know exactly where and how (it happened). We hold our own interviews. Then if the alleged culprit can come we ask him to. If they can’t, we go there and pick him (up) and write a report.

GP: Do you remember the first time you handled an instance of gender-based violence?

SA: I was shocked. She was complaining that she was married to a certain man and then they divorced. After they divorced they met somewhere in a drinking place. The man asked her to accompany him to his house. She refused. So he followed her to her house. But when he arrived, he was with three other men. On arrival, the former husband raped her. It was like they took turns.

To me it was embarrassing and frightening. What we normally do is we advise or take them to Nairobi women’s hospital for such cases. So we advised her to go there so the case may be followed from that end. Since we are not doctors, we cannot know.

GP: Do you think women officers are beginning to respond to such cases better than male officers have in the past?

SA: There are some things that are impossible for us to share with men. I wished there were women who were higher up, maybe they could be models for us to do the right thing. Because in a male-dominated area there are some areas that are inferior of sharing with you, so they will not talk to you.

GP: What made you aspire to higher ranks yourself?

GP: Tell us about a time you faced danger in the course of duty.

SA: There was this time of post-election violence (2007-2008). I was in Eldoret. It’s violence between members of the public and we are the ones that are supposed to stop them. So they also implicate you. They are beating people with stones, throwing objects at you, and they don’t want to know whether you are a woman or a man.

I was the commander during that time, of women and men, too. The men were many, I had only three ladies out of 15. It happened that some of our officers were hurt, some were beaten, their ears were mangled by stones. At that time there is no womanhood and no manhood.

SA: The new constitution. We came in at the right time because the constitution was right around the corner, so I’ve been seeing us move up.

Before it was hard, but today we have Madam Grace Kahindi who is inspector general of the police (the second-highest position in the force). As of late, I’ve seen so many women in the police department. Things have reformed. And we are moving on at the same rate.

GP: Have you ever felt disadvantaged among your peers because you are a woman?

SA: As a woman there is that inferiority complex…you say ‘I wish I didn’t join this department, I wish I wasn’t going through all this.’ I was feeling like I wish women were given special treatment and special training from the men.

But where there are male-dominated institutions…what needs to be challenged is this saying that people are equal but that they are treated unequally when it comes to justice.

Antony Langat in Nairobi contributed to this report.