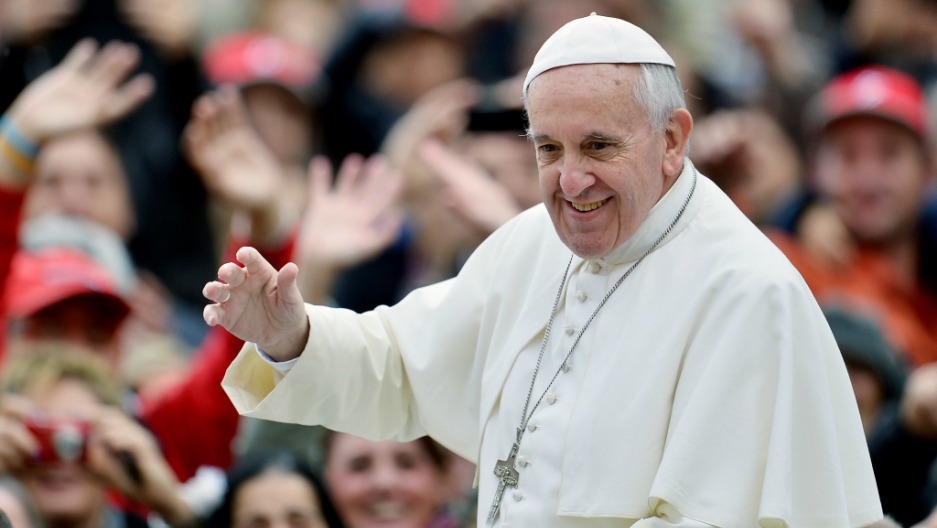 Maybe it should have been Edward Snowden. Thankfully it's not Miley Cyrus. Pope Francis is Time's Person of the Year for 2013.

Good choice? Pope Francis has been all over the news all year, and — so far at least — he seems pretty legit. Either that or he has the world's greatest public relations firm on his side. Maybe both?

Here are 21 reasons why the world is loving the new Pope. (And for requisite balance, here's 5 reasons to be skeptical.)

1) He won the Internet

Pope Francis was the most-talked-about person on social media this year. No easy feat, since he was contending with Snowden and Miley.

He also participated in the first papal selfie, shown above.

You win the Internet, you win.

2) He put into writing his tough talk about global capitalism

Pope Francis has made several public statements about the social damages of capitalism, the profit motive, and the free market (see below).

He recently took his tough talk and put it down in writing, calling capitalism “a new tyranny” in an 84-page document titled Evangelii Gaudium (The Joy of the Gospel). The document is called an “apostolic exhortation,” which is a kind of policy platform for the pope.

There are many highlights. Among them, Francis metaphorically amends the Ten Commandments to address inequality. “Just as the commandment ‘Thou shalt not kill’ sets a clear limit in order to safeguard the value of human life,” he writes, “today, we also have to say ‘thou shalt not’ to an economy of exclusion and inequality. Such an economy kills.”

The rumors started with Archibishop Konrad Krajewski, who, as Vatican “almoner,” pays nightly visits to the poor and homeless of Rome. In an interview, Krajewski said of Pope Francis, “When I say to him ‘I’m going out into the city this evening’, there’s the constant risk that he will come with me.”

According to the Huffington Post, a “knowledgeable source” confirmed that the Pope was sneaking into the city at night disguised as a regular priest, and ministering to the homeless.

Pope Francis held many jobs in his youth, like sweeping floors and running lab tests, before pursuing ministry. Coolest job-related revelation? He worked as a bouncer in a bar in Buenos Aires.

He recently met with the heads of FIFA and the International Olympic Committee, and he had a strong message about joys of sport and the destructive power of commercialization.

“Sport is harmony,” he told Olympic leaders, “but if money and success prevail as the aim, this harmony crumbles.” He also warned against the commodification of athletes, which reduces humans to “mere trading material.” Maybe he should weigh in on unpaid labor in American college athletics.

The mafia and the Vatican have had a long, quiet, mutually beneficial relationship. The mafia made investments in the Vatican and used the church’s financial system to launder money.

That’s changing with Pope Francis in power. He is working to reform church finances and root out such corruption. Quoting Jesus, he said, “It would be better for [the corrupt man] if a millstone were put around his neck and he be thrown into the sea.”

The mafia is displeased. Francis has spoken against organized crime and even called out particular groups by names, including ‘Ndrangheta, a mafia organization in southern Italy that is reportedly very, very unhappy with the Vatican reforms. A leading anti-mob prosecutor from Calabria is concerned that Francis could be a target for assassination.

Pope Francis has done nothing to indicate that he cares.

If Sarah Palin is pissed at you, you're probably doing okay in the realm of the sane. In an interview this week, she pointed to the Pope's liberal "agenda" and wondered whether his message was being manipulated by her favorite villain, "the media." Pope Francis must be doing something right.

8) He cares about the victims of Typhoon Haiyan

After the devastation caused by Typhoon Haiyan, Pope Francis led 60,000 people in a prayer for the victims. He also committed $150,000 worth of aid from the Vatican. Granted, more than 80 percent of Filipinos are Catholic, but I'd like to think Pope Francis would care anyway.

You've probably heard of Lourdes, the holy site where sick and disabled men and women go in search of miraculous cures. Well the group that brings them there had a meeting with Pope Francis last week, he was sure to greet each and every one of the 100 people who had attended, most of whom suffer from debilitating ailments.

These folks are newlyweds who volunteer at an Italian charity that uses humor to help sick children. Pope Francis happily joined in the merriment by donning a clown nose.

That's got to be a Papal first, right?

11) He will embrace you no matter what you look like

It's unfortunate that it's a big deal, but Pope Francis has been getting lots of praise recently for embracing a man whose body is covered in boils.

So maybe we'd like this embrace to be more run-of-the-mill than out-of-this-world awesome, but either way, you've got to give Pope Francis credit for his seemingly genuine love for other humans.

12) He understands the "modern family"

Pope Francis seems to know that families have been changing for a while now and maybe it's time for the Church to catch up to the times.

In early November, the Vatican began sending a questionnaire to bishops around the world calling attention to “new situations requiring the Church’s attention and pastoral care.” The questionnaire addresses everything from same-sex marriage to cohabitation to divorce.

It suggests that Pope Francis’ Vatican might be ready to modify some “traditional” views on the family. For example, he has called on priests to baptize infants even when the parents are divorced or unmarried.

13) He told Catholic leaders to stop being so swaggy

Cardinals and bishops love their fancy duds and gilded mitres. Pope Francis? Not so much.

He called on church officials to live modestly and to pursue a brand of social justice that's incompatible with jewel-encrusted chalices. (Remember the Holy Grail scene at the end of Indiana Jones and the Last Crusade? Choose wisely, my sons.)

Pope Francis has made a couple of comments on same-sex relationships and marriage.

In September, he said the Catholic church had no right to "interfere spiritually" in the lives of gay men and women, and he criticized a church ministry "obsessed with the transmission of a disjointed multitude of doctrines to be imposed insistently." He urged ministers and officials to "find a new balance” and warned against focusing too much on gay marriage, gay rights, and abortion

These words came after a statement in July that attracted global attention. "If someone is gay and he searches for the Lord and has good will," he said, "who am I to judge?"

When it came time to pick a ride, Pope Francis could have gone the ways of his Cardinals and selected a golden Maserati studded with rubies. Instead, he accepted the gift of a used Renault from an Italian priest, Father Renzo Zocca. The car has 190,000 miles on it.

Obviously, it's not armored, much to the chagrin of Vatican security, who would prefer he travel in the "popemobile," passively waving to the masses from behind three inches of bulletproof glass.

Pope Francis drives an old car and wears simple clothes because he cares for the world's poor. That's a very papal thing to do. What's a little less papal is to take that care and turn it into a trenchant critique of global capitalism.

That's precisely what he did during a Mass in September in which he said the world had "become an idolator of this god called money."

"We don't want this globalized economic system which does us so much harm," he told the crowd. "Men and women have to be at the center ... not money." He has revisited these issues repeatedly (see #1.)

17) Speaking of idols, he's not looking to be one himself.

Pope Francis probably doesn't want to be the topic of listicles such as this. (Too bad!) Humbleness is his M.O. When he found out that the city of Buenos Aires has installed a life-sized statue of him outside of his former church, the Cathedral of Buenos Aires, he asked them to take it down.

There are lots of ways to be humble. A traditional way is to wash another person's feet. This tends to be a performance more than anything else. Unless you're Pope Francis.

He visisted the Rome's Casal Del Marmo Youth Detention Center in March and washed the feet of several prisoners, including women. He was the first pope in history to wash a woman's feet.

Welcome to the 21st century. The Pope has almost as many Twitter followers as Justin Bieber.

Twitter is futuristic, but Pope Francis likes to get in touch using old technologies, too. Since being elected Pope, he has called people around the world, many of whom have written to him, some who haven't. He makes the calls himself. He uses a landline.

21) He's reaching out to other faiths

Pope Francis celebrated the end of Ramadan this year by reaching out to Muslims.

“I want to send a hello to Muslims around the world,” he said. “I hope that Christians and Muslims engage in mutual respect, especially through the education of new generations.”

It was a major improvement from Pope Benedict, who, in 2006, called an Islamic text “evil and inhuman.”