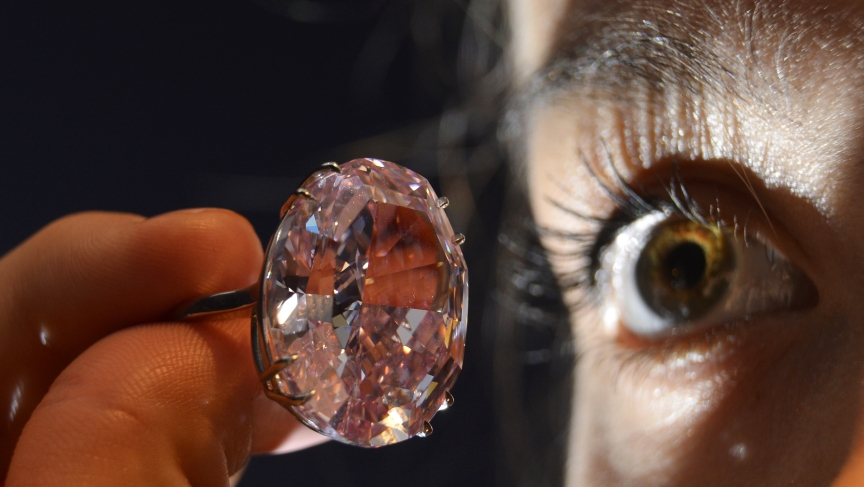 The diamond known as the "Pink Star" sold at an auction in Geneva on Wednesday for 68 million Swiss francs, or about $83 million. That's a world record.

John Hatleberg say it's worth every dollar. He's a conceptual gem artist based in New York. He makes legal counterfeits of diamonds for companies like De Beers. And he says the value of the gem can be attributed to a simple fact: there's nothing else like it.

"Historically, the finest colored diamonds in the world came from India in the 1600s," he says. "But 12 years ago, when the diamond was unearthed by De Beers, they found this 132-carat crystal. And nothing like it had ever been discovered."

The diamond then went to cutters in New York. They put it through a process that is part science, part art. It took them 20 months to cut the diamond. Every millimeter counted in the cut. In the end, the cutters created a 59.6 carat, internally flawless, fancy vivid pink diamond.

"To attain a pink like this is something that no one really had any idea they could achieve," he says.

Hatleberg is one of the select few to have held the diamond. He considers the gem one of the true wonders of the world.

He says diamonds are perfectly designed containers for meaning — and the "Pink Star" is much more.

It transfixes people, he says. When he last looked at it, he didn't want to stop.

All the gemstone replicas below were cut and created by John Hatleberg.