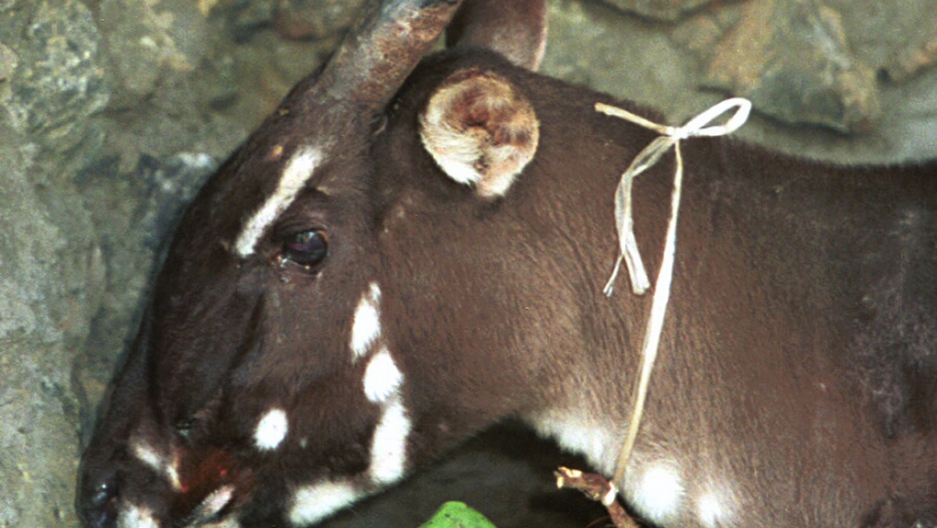 A saola, or "Asian unicorn," is caught on camera for the first time in 14 years in a remote Vietnam forest.
Credit: World Wildlife Fund
Share

In parts of Asia, "unicorns" really do exist.

At least in theory.

Environmentalists are jubilant after cameras in a remote Vietnam forest capture the first pictures of a live saola in 14 years, the World Wildlife Federation announced Wednesday.

While they actually have two horns and not one, saolas are known as "Asian unicorns" because humans seldom see the horned creatures.

The sighting suggests that conservation efforts to protest the endangered animal are working.

"These are the most important wild animal photographs taken in Asia, and perhaps the world, in at least the past decade," William Robichaud, coordinator of the Saola Working Group of the International Union for Conservation of Nature's Species Survival Commission, said in a World Wildlife Fund press release.

The picture was taken in September in a reserve in Vietnam's Central Annamite Mountains.

Not discovered until 1992, the saola is a slim bovine with two sharp, parallel horns that can grow up to 20 inches in length.

It was the first large mammal new to science in more than 50 years and had not been seen in Vietnam since 1999, according to WWF.

Conservationists estimate there are only a couple hundred now in existence.

“This is a breathtaking discovery and renews hope for the recovery of the species,” Van Ngoc Thinh, WWF-Vietnam's country director, told the Christian Science Monitor.