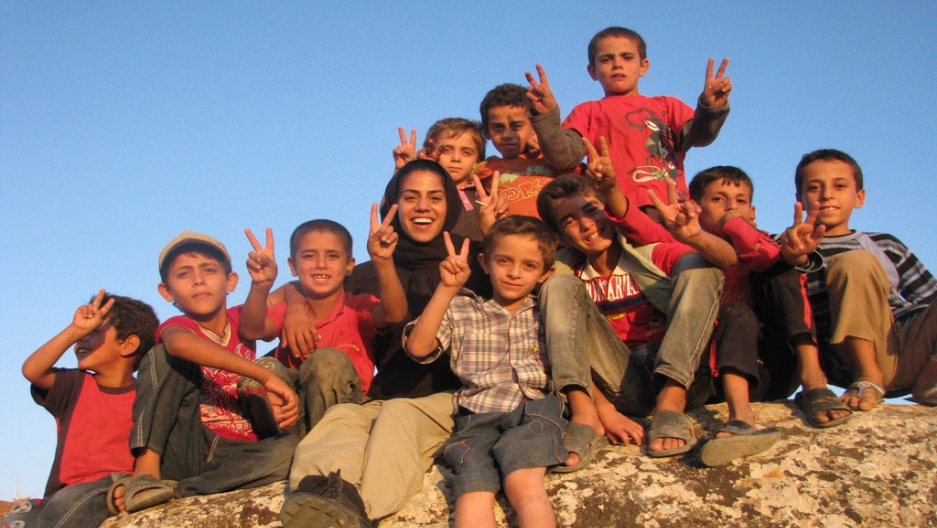 Puneh Alai'i on a rock with all the village boys giving a peace sign during her most recent trip inside Syria in September 2013.
Share

REYHANLI, Turkey — In the wilds of war-torn Syria, there’s a young Persian woman outdoing the United Nations on aid.

At first glance, it hardly seems possible that this 28-year-old Iranian-American, with her California slang and her Converse shoes, is going inside Syria at all. Even harder to believe that she could be getting aid into more civilian hands than many established aid organizations who face major obstacles.

But, in a way, it’s true: Puneh Ala’i brings funds directly to Syrian villagers in rebel-held parts of the country — which is more than the UN can say.

That’s because legally, the UN still considers Syrian President Bashar al-Assad a sovereign head of state, so funding must go through Damascus — right under the regime’s nose.

Ala'i, whose trips are the first for her new global not-for-profit For the Unseen, is focusing on areas that have broken away from regime control because she is concerned that aid is not reaching Syrian civilians that have been left stranded there, often without food and shelter.

Syrian humanitarians, who are better equipped to access these areas, are equally concerned. Yakzan Shishakly runs the Maram Foundation, one of the first humanitarian groups on the ground inside Syria after demonstrations against Assad spiraled into a bloody conflict more than two years ago. He says not much of the UN’s money, including $385 million from Washington, gets into areas under rebel control.

Every week, Shishakly said, Maram staffers visit numerous villages “where there has been no aid since a year, two years ago, and they never see any NGO or help.”

The UN is not happy with the state of affairs either. On October 2, the agency’s humanitarian chief, Valerie Amos, called on the UN Security Council to order the expansion of humanitarian efforts inside Syria.

“Humanitarian workers need full and sustained access to reach every person in need, wherever they are in Syria, and they must be protected to do their work safely,” Amos said, promising that “over two million people who have been unreachable for many months” would be helped if the roads could be secured.

But the UN Security Council has been divided in its response to the crisis in Syria, and is unlikely to unite on the initiative.

Meanwhile, Syrians continue to suffer. Over 100,000 people have been killed in the nearly three-year conflict, and an estimated 5,000 die every month.

Efforts by people like Ala’i and Shishakly show growing concern over the humanitarian crisis in Syria, where some 10 million people are not getting the medical help they need, whole villages are being leveled, and thousands are starving to death in areas cut off from most international aid.

Even Syrian-led aid organizations, which actually are able to reach these areas, have problems; some are suspected of enlisting impoverished refugees as volunteers and refusing them paid positions.

Ahmed Zeidan, a 25-year-old Syrian refugee formerly with a Syrian non-profit, said that “the problems are bigger than the [aid] organizations, so sometimes the organization delivers the aid to the local councils in cities and villages in Syria, and some of them steal some of the aid, or maybe distribute [it only] to their families and friends.”

“Things are fucked up here,” Zeidan wrote, adding that “no one knows what happens” to aid, and monitoring is complicated by the number of organizations involved.

According to Zeidan, there are 30 aid groups operating out of Reyhanli, a Turkish border town and home to some 50,000 Syrian refugees, alone. He also talked about the misappropriation of funds. Inside Syria, he said, some “people will take the aid, even they don't need it and sell it, so this subject is confusing.”

All the confusion appears to be widening the black hole of misunderstanding surrounding aid efforts in Syria. Many Syrian in Reyhanli said they felt betrayed by how little help they receive on the ground and repeated promises of aid from political leaders on TV.

International donors have promised $1.4 billion in aid for Syria, but as of last month little over half of that had actually been delivered, according to the United Nations Office for the Coordination of Humanitarian Affairs’ Relief Web. Charities are equally challenged, with some donations reportedly at risk of being siphoned off by Syrian militant groups, according to Britain’s Telegraph.

But all of this could be breeding disillusionment and mistrust. Ala’i, an American whose parents are refugees from Assad-allied Iran, said she wasn’t given a particularly warm welcome when she arrived at a village south of Idlib in March, and her experience inside Syria speaks to the challenges facing humanitarians there.

“They didn’t just like open their arms to me when I showed up at my first trip,” she said. “They were just like, ‘Why are you here?’”

Many Syrians are shocked to see anyone at all — much less someone who wants to help. Damascus-born activist Rania Kisar, who has been working inside Syria for the past year, visited a village right after it had been attacked and recounted a scene familiar to humanitarians like Ala’i:

When asked about her intentions during her first trip, she responded, “Well, why not? You know, you guys need help, and I wanted to make sure the help came to the people,” later adding, “because I know how it works, you know, when money gets donated to non-profits.”

Another problem for many civilians lies in finding employment. Of the few foreign organizations that do enter Syria, many arrive with an entourage of salaried employees, further angering Syrians who want to work.

Staffers at Syria’s Atmeh refugee camp, the largest inside the country, in September said there was a demonstration over hiring decisions at the camp medical center, which is run by the international NGO Medical Relief for Syria (MRS). The group is just one that has hired 400 people from inside the camp, making it the largest employer in a temporary home to 22,000, according to Atmeh’s provisional director.

“We hope that organizations, instead of looking for funding, it’s best for them to start providing jobs for these people, not just food,” Mohammad Zakour said, praising hiring efforts by Medical Relief and Shishakly’s Maram, which he said employed about 50 people from inside the camp. “As for the other organizations, nothing,” he said.

Most Syrians, however, say they don’t see these opportunities.

“The Syrian himself gets nothing from the [outside] support,” Baleegh, the camp’s 23-year old cook, said. “Seen torture, seen massacres, and nobody is willing to help this very civilian.”

Ala’i is willing to help, but doing so is not as simple as stuffing cash into her headscarf, which she wears out of respect while working in Syria, and marching into a war zone.

Instead, she relies on a trusted network to get inside Syria and once there distributes aid, teaches village children English, does arts and crafts with them — and questions local tradition.

At one point, she insisted that a villager eat dinner with his wife, instead of having her eat independently after serving him, as is customary. He was upset, but they eventually reached a compromise and he joined his wife and Alai’i for dinner after his own guests had departed.

The villagers have bonded with Ala’i, who has visited them a total of three times despite fears of bombardment from the regime (the name of the village and her methods of accessing it have been withheld due to safety concerns).

“The first and important thing I loved in Puneh is her humaneness,” villager Abo Samer said via Facebook from the village, which has intermittent Internet thanks to a wireless unit set up by the rebel forces.

“She lives in [a] safe place [in America] and between her family and friends,” he continued. “What's the reason to come to Syria to help, learn and draw the smile above the blood, and above all that, she's [a] woman,” he added, presumably referring to safety concerns. “She's [a] great and brave woman,” he added.

Another humanitarian who works part-time out of Reyhanli, Dunja Khoury, said she connected with Ala’i’s work “because of what she is doing, the way she is thinking and feeling — I immediately loved her because we are on the same level — like all humanitarian workers. We are interested in human beings. We don't like to focus on the political issues. We don't care about Sunnis, Alawites, Shiites, Christians — we care about human beings like you and me. We have to see this, the world has to feel this, that actually we [all] are the same. We love, we cry when somebody was killed we loved, we feel pain, hope — we are so same.”

“I think when the world would listen more to the voices of humanitarians — they would think different about Syria,” said Khoury, a German-Syrian psychology student who runs the “I CARE about Syria” online campaign, in which people upload photos of themselves with a message of solidarity for the Syrian people, and “From Syria to the World,” which features messages from Syrians to the global community. Khoury is also a founding member of the German non-profit “Barada Syrienhilfe,” which is building a school at Atmeh refugee camp.

Zeidan, who knows Ala’i well, said "she is the only girl [who is] not Syrian [who] goes inside Syria, and I mean inside, not at the border. And she buys the food basket herself and distributed [aid] herself, also. I mean, she wants to do the work by herself. So I haven’t see a girl like her that brave, she is doing an amazing work."

Whether she’s speaking with Syria refugees like Zeidan or would-be donors in Orange County, Alai’i is not one for small talk — she likes to get at the heart of things.

One encounter she said she would never forget took place when she asked a villager how he felt about the war. He simply shrugged his shoulders, she said, and responded abruptly: “we are ants.”

Ala’i said she was confused and recalled him explaining, “no matter if we run, if we hide, we will die. The end is death from our own [leader].”