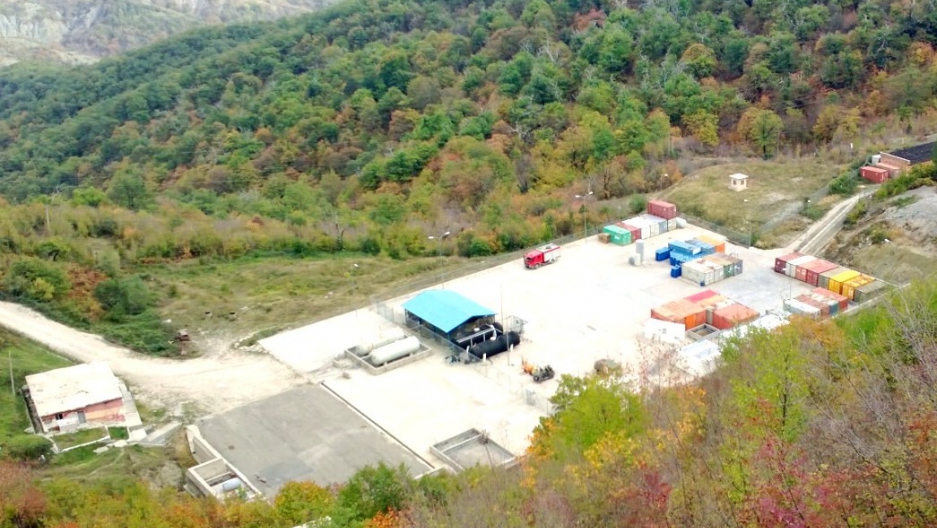 No guards were visible at the hazardous waste site in Qafmolle.
Credit: Besar Likmeta
Share

But how it will get rid of its massive existing stockpiles remains unknown.

Among the options, the United States has asked this small Balkan country of 2.8 million people to help.

A NATO member, Albania became the first country to destroy its entire chemical weapons stockpile in 2007.

But that’s prompting concern from environmental groups that say that hazardous waste from those weapons, currently sitting in a poorly guarded army base, still poses a threat to the environment.

According to a binding United Nations resolution Moscow brokered in September, Syrian President Bashar al-Assad’s chemical weapons stockpiles must be transferred from his country by January 2014 and destroyed before June.

Syria agreed to the deal after it joined the Chemical Weapons Convention on the heels of a chemical weapons attack on an opposition-controlled suburb of Damascus in August that killed more than 1,700 people.

The government has more than 1,000 tons of such weapons.

A UN memo leaked to the Norwegian broadcaster NRK identifies Belgium, Norway and the five permanent members of the UN Security Council — the US, Russia, China, France and Britain — as possible destinations.

Norway has already rejected the UN request, citing legal hurdles and a lack of appropriate facilities to destroy the toxic chemicals.

Albanian Foreign Minister Ditmir Bushati told the French newspaper Le Monde last month that US officials had also "approached" his government, but that Tirana “had not yet made a decision.”

However, environmental groups say taking in Syria’s stockpiles could spell disaster. They point to Tirana’s poor record of destroying its own weapons caches, chemical and conventional.

Albania’s chemical weapons stockpile was discovered by chance in an abandoned bunker in December 2002. It’s believed to have been imported from China in the mid-1970s by the regime of former Albanian Stalinist dictator Enver Hoxha, although no documentation was ever found.

Tirana eliminated more than 18 tons of chemical warfare agents, including mustard, lewisite and chloroacetophenone agents, with US funding and assistance.

The process cost approximately $45 million, funded under the Nunn-Lugar Act and conducted with the help of the US Defense Threat Reduction Agency.

But the hazardous waste left over from the incineration still sits outside in 25 containers on a concrete platform in the village of Qafmolle, a dozen miles outside the Albanian capital.

According to US diplomatic cables published by WikiLeaks, the containers had to be repackaged after they started to leak hazardous materials in 2008. Plans to construct a hazardous-storage site with the help of the European Union were never completed.

During a visit to the site this month, an ambulance and a fire truck were visible, but no sign of any security personnel guarding the materials.

The plastic containers into which the waste was repacked have a lifespan of 20 years. Five have already passed with no solution found for its safe disposal.

The Alliance Against Trash Imports, AKIP, a pressure group that successfully lobbied for a ban on importing conventional waste into Albania, has called on the government to come clean over a possible decision to import Syrian chemical weapons.

“The government of Prime Minister Edi Rama is bound … to comment on the truth of this news and inform the Albanian citizens on its decision,” the organization said in a statement.

“Albania’s legal framework leaves no loopholes for the import of chemical weapons and the Albanian state is not able to guarantee the success of a highly dangerous technological process of this kind,” it added.

AKIP representative Aldo Merkoci says that although Albania successfully destroyed its own chemical weapons, an attempt to dispose of its conventional weapons stockpile became deadly in 2008.

An explosion in a former army barrack in the village of Gerdec outside Tirana, where old artillery shells were being disposed, killed 26 people and wounded more than 300.

“We not only failed in Gerdec, but we failed with massive human and economic cost,” Merkoci said. “We should really think twice before we take any further steps despite any help that might come from the international community.”

Others believe Albania can benefit from taking in Syria’s stockpiles.

Jeffry Lewis of the James Martin Center for Nonproliferation Studies says Tirana would create momentum for the EU to fund the disposal of its own chemical weapons waste.

“The country would be better off if a hazardous waste facility were built,” he says, “but it’s a job that must be done well.”