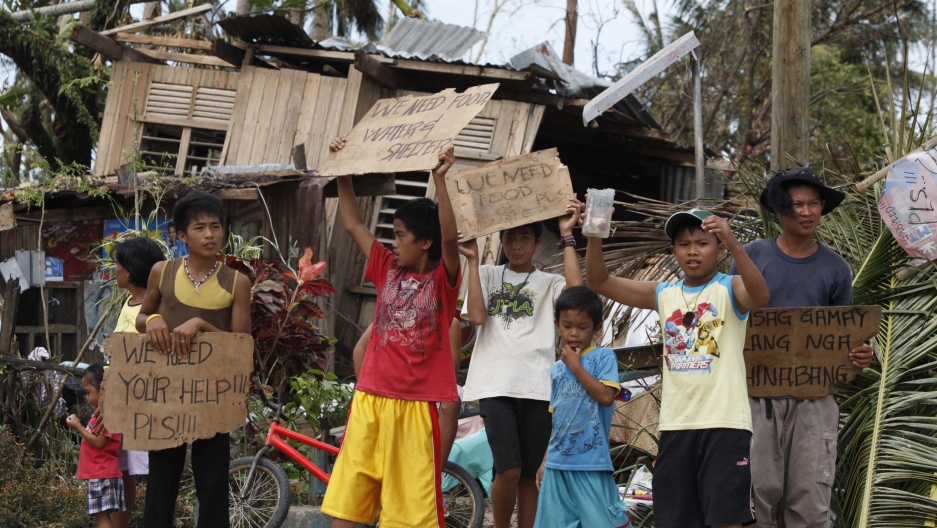 Children hold signs asking for help and food along the highway, after Typhoon Haiyan hit Tabogon town in Cebu Province.

Medical supplies and food and water are trickling in via some military helicopters.  But many of the devastated areas are so isolated that they've been difficult to reach. The roads are still blocked by fallen trees and homes, and littered with dead bodies.

Kevin Vacca  is one of the few people able to get in to these areas.  He's an American missionary living in the Philippines and has managed to deliver some food to survivors in the devastated northern tip of Cebu Island.

"Northern Cebu is deteriorating daily," said Vacca.   He said people living in the northern tip of Cebu island had not received any food for four days.  Today, he made the trek to the devastated areas to bring food for approximately 200 people.

"We brought about 500 lbs of rice and we brought 75 cans of sardines.  Now we're going to take another 500 lbs of rice in the morning. And there's no more sardines to buy so we're taking noodles".

So far, cooking the food has not been a problem.  "In the last few years, propane, bottled gas here has gotten very expensive. So a lot of people in the countryside have gone back to cooking with wood or charcoal. If they can get rice, or fish or sardines or noodles, they can cook it," said Vacca.  "And they know how, even, to do the fire when its raining.  So, it's quite a bit of ingenuity when it comes to that."

Vacca is planning to make another trip to the area in the morning.  "We're dealing with a safety issue right now.  At night it's impossible because there are thousands of people lining the roads  begging. And, of course, no one has money. There's no teller machines working and most of the banks have been destroyed. Those people haven't eaten in four days so at some point desperate people do desperate things."