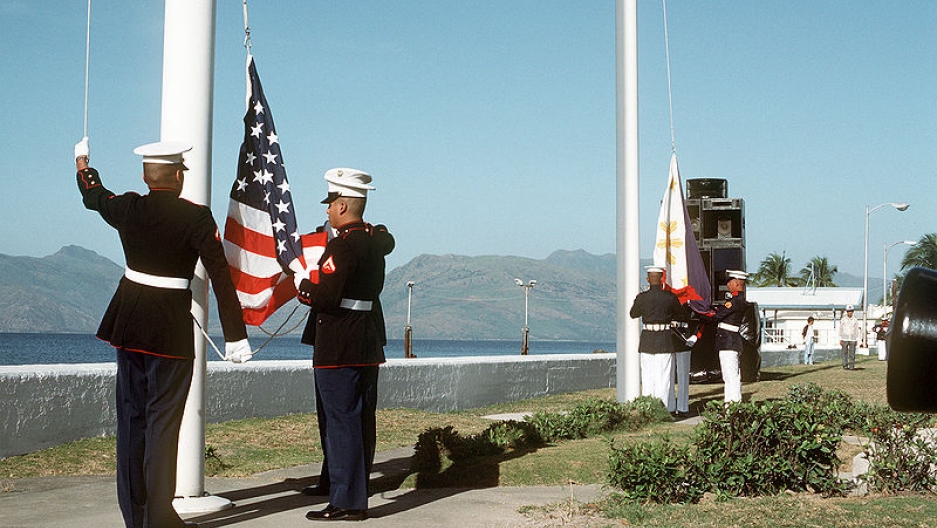 US Marines raise the American flag for the last time at Subic Bay naval base in the Philippines, as their Philippine counterparts raise their ensign for the first time, at the start of the base de-activation ceremony, Nov. 24, 1992.

The United States has been quick to help deliver aid to storm survivors in the Philippines. The US military has contributed troops, cargo planes and ships to the relief effort.

That's not surprising, given our nation's long, and sometimes rocky, relationship with the Philippines.

US interest in the Philippines goes back to the late 19th century, the classic age of great power politics. US naval strategiests were keen to project US naval power into the Atlantic and Pacific to protect the US mainland from invasion and protect US commerce, and also just to plant the flag when empires were planting flags all over the world. This is the era in which Hawaii was occupied, along with several smaller island chains, to provide bases across the Pacific, known as coaling stations.

The Philippines at the time belonged to Spain, and had been a Spanish territory for 300 years. So when the Spanish-American war came along in 1898, the US Navy was ready, willing and able to attack and seize the Philippines.

At the time, there was much US rhetoric about freeing colonial peoples, and Philippine nationalists had been fighting against Spain. But to all intents and purposes, the US made the Philippines a colony of its own. That didn't go down too well, and led quickly to a nationalist rebellion and a prolonged insurgency. Thousands of Americans served there in operations recognizable to those who served in Iraq — with combat outposts, patrolling and training of local forces.

Eventually the revolts were crushed, and the country stabilized. That stability was helped by granting gradually increasing degrees of self-government, while the US maintained control of its military bases — which had been the original purpose for entering the Philippines. Activities centered on the naval base at Subic Bay, and Clark airbase.

The real turning point in the relationship was World War II, when Americans and Filipinos fought side-by-side against the Japanese, who attacked the Philippines immediately after Pearl Harbor. Japan conquered the island, but US General Douglas McArthur vowed to return. He came ashore with four US army divisions on the island of Leyte in late 1944, not far from where Typhoon Haiyan came ashore last week.

The common effort against the Japanese greatly increased the American level of respect for the Philippine people, and led to independence for the Philippines in 1946. Again, the US was sure to keep hold of its bases. These proved to be of enormous use in the Cold War, supporting operations in the Korean War, then in Vietnam and south-east Asia.

The base grew enormously in size, with millions of Americans passing through or flying missions from there. In fact, the bases became small American towns, with schools, movie theaters, ball parks and more.

But anti-colonial feelings remained strong in the Philippines. Protests broke out from time to time, and a lot of negative publicity surrounded the red-light districts that flourished outside the US bases.

In 1991, the US bases were devastated by the eruption of the Mt. Pinatubo volcano, just as a typhoon hit. At the same time, the Philippine Senate, out of the blue, voted to block the renewal of a new bases agreement, and within a year, the wrecked bases were abandoned. US forces relocated to Guam and elsewhere. This did wonders for Philippine pride, but was considered damaging to America's ability to project power in the western Pacific.

After the terrorist attacks of Sept. 11, 2001, US-Philippines cooperation entered a new phase, with US forces sent to help the Philippines military combat a Muslim insurgency in the south with ties to al-Qaeda.

Then the Philippines became alarmed by a newly resurgent China, and got involved in a dispute with Beijing over who has sovereignty over various islets in the South China Sea. This coincided with President Barack Obama's "pivot to Asia" policy, and as of June, 2012, the US has been granted permission to use military bases in the Philippines once again, and a semi-permanent presence is envisaged.

So the US is back in the Philippines, but this time as an ally and guest rather than as a colonial power. It's for that friendship, as well as common humanity, that the US is now providing much-needed assistance to the victims of Typhoon Haiyan.