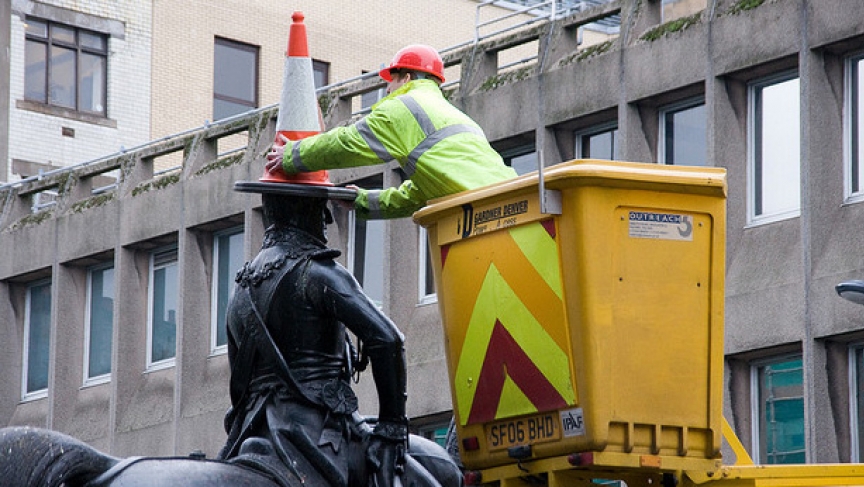 Removing the cone from the statue of the Duke of Wellington in Glasgow, Scotland.

It's one of the top sights to see in Glasgow. No, it's not the Glasgow Cathedral or the Lighthouse or any of the numerous museums — it's a statue of the Duke of Wellington on horseback and, specifically, an orange cone that, for decades, Glaswegians have jokingly placed upon his head.

Recently, the city council, tired of what they deemed a dangerous and "depressing" tradition, submitted a planning application to elevate the plinth, or base, of the statue by several feet to discourage the placement of the orange cone.

The planning application sparked an online outcry to save the cone.

Gavin Doig and Donna Yates began an online petition and within 24 hours, the petition had received over 10,000 signatures from all over the world.

The petition and Facebook page and Twitter hashtag (#conegate) certainly caught the attention of city officials, who quickly retracted the planning application.

Still, the fight is not over. The BBC reported a statement by local officials stating a commitment to keeping the Duke's head cone-free.

"If that means that we raise the plinth, or put something else to make sure the public continue to be safe, we'll do whatever it takes," city official Brian Devlin told the BBC.

Meanwhile a crowd of Glaswegians celebrated the success of the petition at the foot of the Duke's statue on Tuesday. Many sported their own safety cone hats and signs reading, "We are all the Glasgow cone."

[View the story "Cries of 'Yes We Cone!' Heard on the Streets of Glasgow" on Storify]