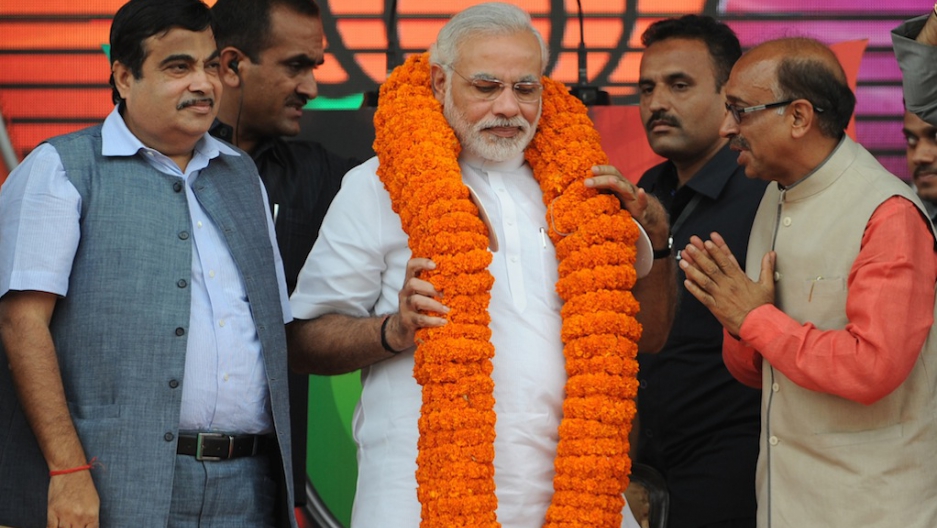 “Goldman is parading its ignorance about the basic facts of the Indian economy, and it also exposes its eagerness to mess around with India’s domestic politics,” said Anand Sharma, commerce and industry minister, in an interview.

Indeed, the Goldman endorsement could be construed as controversial or risky.

Modi represents India’s Hindu nationalist movement, the Bharatiya Janata Party (BJP). Critics contend that he shares the blame for a slaughter of Muslims in Gujarat state, where he has been chief minister since 2002. While Modi denies wrong-doing and has never been charged, the evidence is apparently strong enough that the US has cancelled his entry visa.

Still, Goldman is far from alone in its optimism about Modi. Nearly three quarters of India’s business leaders think he would be a great prime minister. Modi and the right-wing BJP are proud to point to the average 10 percent growth per year since he gained power in 2002. His message is alluring for middle class Indians who have suffered lately from a falling rupee, and who blame the current Congress-led coalition government for failing to push through economic reforms.

So, what about the other 26 percent of business leaders who are pessimistic about Modi?

Some have reservations about Modi’s record as chief minister of Gujarat and the sorts of policies he might implement. They point to debt that soared under Modi, and say if you look at the data, other Indian states can boast similar or better records. They attribute much of Modi’s reputation to a ‘Vibrant Gujarat’ PR campaign that attracted foreign investors to his state.

Here, with the dissenting view on Modi, is Shankar Sharma, a director at First Global, one of India’s leading investment brokers.

(The interview has been condensed and edited by GlobalPost.)

What would Prime Minister Modi would mean for investors?

Shankar Sharma: I think investors should be looking for an alternative only if what is presently available is very bad. In my view, India’s current economic management is inarguably the best that we have, and one of the best in the world. I know this runs contrary to the general narrative. I tend to take the view that everything popular is probably wrong.

Optimism about Modi as prime minister is completely without any rational basis. We have absolutely no data and no analysis that supports what some sections of the media and some parts of the middle class believe, that he is the solution or the magic bullet. And forget about Modi, this is about BJP as a party.

That’s pretty damning isn’t it? Given that we’ve been told about the Gujarat development story being the best in India, why do you say there’s no rational basis for that?

I prefer to look at the data, forget the fluff. I have juxtaposed the Gujarat data alongside data of every major state in India. A lot of what is written about Gujarat comes from journalists being briefed and not checking. Then it gets marketed and it becomes the truth.

I’ve seen no discernible difference between the data in Gujarat and the data in at least half a dozen other major states. About seven or eight states account for roughly 65 percent of the GDP of India. You’re talking about all the major states of India.

But on one particular count Gujarat does stand out: the sharp build-up of debt that Gujarat has had in the last ten years.

It is now the most indebted state on a per capita basis.

Whatever growth you have in Gujarat has been achieved has come at a very high build up of debt.

The other thing is that Gujarat has always been an amazingly progressive state. I have been going since 1988. It’s a majorly safe state for women. And the roads in Gujarat were always the best in India. So what is the big deal about what is there today?

It’s simply, in my view, excellent spin, and hats off to him for having done that. Good spin can overcome a lot of things. The plain data is very contrary to what is being projected out there.

Is there more to the Gujarat success story than just spin?

I have not heard any credible economic plan from the BJP which tells me that I should be voting for them. The only thing I hear is that everything the government does is wrong.

Okay fine, but tell me what your plan is.

That’s the nature of opposition isn’t it? Political parties around the world try not to give too much detail because they know their policies will be unpicked.

But at some point they need to tell me what the plan is. The BJP is the only mainstream political party that has no economist. And the BJP rule between 1999 and 2004 had the worst nominal GDP growth in the last 30 years in India, the worst by far.

So again, whatever GDP growth the BJP delivered in those five years, the growth was with very high debt. In contrast, in the last nine years, India has grown at about seven and a half percent compounded. But more importantly, in this ten years, debt to GDP has come down from 91 percent to 67 percent. No country in the world in the last ten years has statistics that remotely rival this. It’s no contest.

If Modi were to become Prime Minister, what are the first issues you would want him to deal with and what would you hope that he does?

The commonly talked-about solution for India is to boost manufacturing. But for that you need subsidised rates of financing. That is a real problem because in India lending is market-driven, unlike in China where banks can lend below market rate to state-owned companies. These implicit subsidies exist. India unfortunately is more market-driven than it actually ought to have been. So I do believe manufacturing needs to be revived.

People talk about infrastructure development. I’ve been hearing that since I was born 50 years back. Those are motherhood statements that for the next hundred years you can keep hearing about.

But what I would definitely urge any policymaker is, Please continue on the path of reducing poverty levels. India has had a 20 percent poverty reduction in the last nine years. It is a mammoth achievement. Please don’t relegate that to the background and put to the foreground the attention-grabbing headlines that make the stock market rise by 5 percent or 10 percent and make the pink papers and the Financial Times write good things about you and how reformist you are merely because you are making policies that suit the chattering classes.

This government is taking the rap for not doing that as much as it ought to have. It has taken the path of grass-roots empowerment, and the people that affects never get represented in the Times of India or the Economic Times or the English-language news channels. The government set out with a clear plan saying “look, the rich can take care of themselves.”

Today any company will tell you the big growth is coming from rural India. That was never the case 15, 20, 30, 40 years back, so why has it happened? Because of a conscious policy. I would want that to continue, even if it means you get a lot of bad press locally and internationally that India is not reformist. I fear that if another party comes to power, that will take a back seat.

So essentially without wealth coming from the bottom up, if people are not lifted out of poverty, you can’t create economic wellbeing in India?

That has been demonstrated. I was reading in the Economic Times some small village in Maharashtra has ordered god knows how many Maruti cars and this has blown away the Maruti management. What I’m talking about is not just being very egalitarian, I am talking hard business that is good for investors.

But why is this good for investors specifically?

Until now India’s consumption classes might have been the top 5 percent or the top 15 percent or so. But if you lift another 20 percent of the population out of poverty, you’re driving sales numbers right into the hands of Maruti or Hindustan Lever or ITC or Bharti Airtel, even banks – you name it, vast swathes of corporate India are making tremendous amounts of money in the next many, many years as you see this elevation of people who may not have been able to buy toothpaste before.