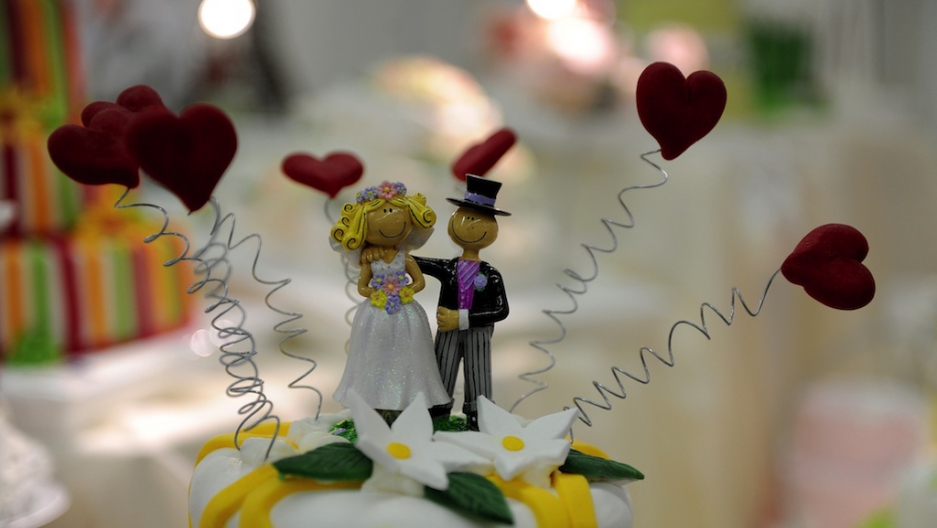 Bride and groom figurines decorate a wedding cake displayed at a wedding fair in the German city of Essen on Jan. 8, 2012.
Credit: PATRIK STOLLARZ
Share

UK immigration officials have been left rather red-faced after they busted a “sham” wedding only to discover that it was genuine.

After receiving a tip-off from Camden Council in London, where the Chinese-Italian couple had registered to marry, the Home Office sent four officials dressed in flak jackets to the ceremony last Thursday afternoon to bust the couple.

So confident was the Home Office that they were about to expose another “visa marriage” that they invited a journalist to witness the raid.

The officers interrupted the vows and hauled Chinese bride Miao Guo, 34, and Italian groom Massimo Ciabattini, 31, into separate rooms where they were interrogated for 30 minutes.

Apparently officials at Camden Council had become suspicious after the couple had trouble spelling each other’s surnames. Guo’s visa was another red flag: it was due to expire in six weeks.

But during the interviews the bungling immigration officials realized the couple, who had met at upmarket department store Harrods in Knightsbridge, were really, truly in love.

“The couple’s answers to questions about their relationship and life had matched up perfectly,” wrote Camden New Journal journalist Alice Hutton, who had been invited to witness the raid.

“They had genuine bookings afterwards at a restaurant with friends and a hotel room for the night.”

Despite ruining the couple’s big day, Camden Council and the Home Office have been anything but apologetic for their mistake.

“We are legally obliged to report any suspected sham marriages or civil partnerships to the Home Office, based on the criteria outlined in the Immigration and Asylum Act of 1999. It is then for the Home Office to decide how to progress and whether to take action,” a spokesman for the council said.

A spokesman for the Home Office said: “Where suspicions are raised that a marriage may not be genuine we will investigate. On this occasion no action was taken.

“We continue to work closely with registrars to prevent people from abusing the marriage system in a bid to get round our immigration laws.”