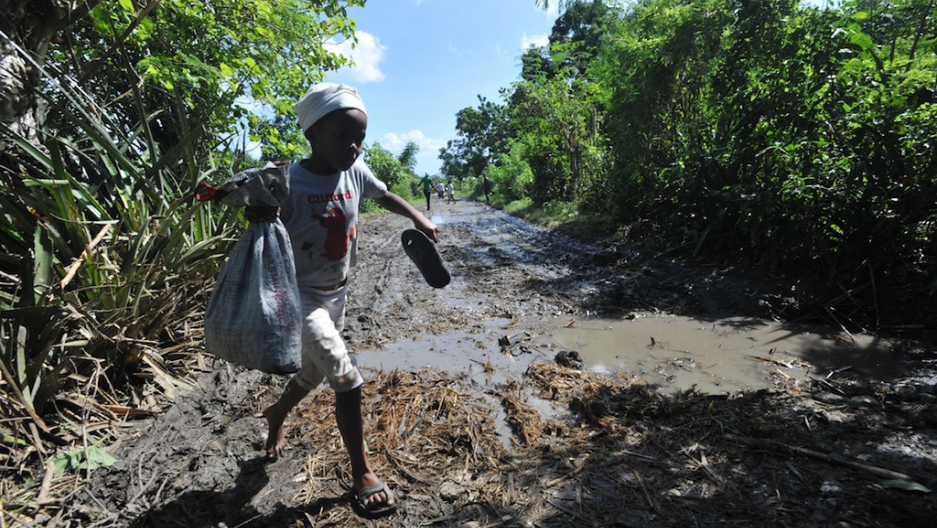 A child walks through damaged fields in Leogane, south of Port-au-Prince, one day after Hurricane Sandy passed through Haiti on October 27, 2012.
Credit: Thony Belizaire
Share

NEW YORK — This year was predicted to be an abnormal hurricane season, with higher than average occurrences of Category 3, 4 and 5 storms.

After witnessing Hurricane Sandy, we can all imagine the devastating social and economic impacts of similar extreme weather events — stretching the ability of governments to respond and rebuild ravaged communities. Even as Super Typhoon Haiyan provides yet another tragic example of the destruction that an abnormally strong storm can cause, the twin storms Ingrid and Manuel, which devastated Mexico during September, demonstrate how even relatively weak storms can wreak havoc on vulnerable places.

The increasing threat of catastrophic storms coincides with an era of global austerity. With funds already limited for meeting basic societal needs, we must find cost-effective, practical and robust ways to reduce risks to people and property.

Built infrastructure is a common way to reduce the impacts of weather hazards. Such man-made projects can be effective but expensive to implement and maintain, and may cause a cascade of unintended economic, social, and ecological consequences. We also know levees and floodwalls are not fail-proof, as 2005's Hurricane Katrina demonstrated.

One increasingly appealing alternative comes from nature conservation, a field often associated more narrowly with the protection of wildlife and wild habitat.

The approach involves the use of natural systems as “living infrastructure” to protect people against extreme storms. While the scientific knowledge is still evolving, growing evidence and observations indicate that natural environments can be effective buffers against major weather events.

An illuminating example of how nature can modulate storms’ impacts comes from the Caribbean island of Hispaniola, shared by both Haiti and the Dominican Republic. Slammed by Hurricane Jeanne in 2004, the island suffered thousands more deaths on the Haitian side than in the neighboring Dominican Republic.

Many scientists believe that extensive deforestation in Haiti triggered landslides and flooding during the storm, while in the Dominican Republic forest conservation may have prevented such disastrous conditions.

Similarly, reports following Hurricanes Katrina in 2005 and Sandy in 2012 focused attention on the role of coastal ecosystems in reducing the impact of these storms.

Natural defenses can also provide a range of social and economic benefits that built infrastructure does not. Wetlands, for example, support fisheries and tourism while storing vast amounts of carbon. This is an invaluable benefit if climate change, resulting from the increase of CO2, is contributing to higher frequencies of extreme storms.

Natural approaches can be cost-effective by reducing future risks of major storm damage while generating jobs and other benefits to local economies in the present.

Not surprisingly, the integration of living infrastructure into risk reduction strategies is increasing. New York State’s Post-Sandy Commission report emphasizes the use of natural systems to protect coastal communities. The US Federal Emergency Management Agency committed not long ago to consider natural processes in its cost-benefit plan for storm and flood mitigation.

Because coastal areas host some of the most expensive natural ecosystems to restore, resources and lives may be saved by conserving critical natural defenses before they are lost or severely compromised. In the face of growing population and development pressures, these investments are especially urgent today.

Unfortunately, disaster financing is currently directed more heavily toward reconstruction than prevention. New thinking in how funds are allocated is necessary to support risk reduction and sustainable development.

No form of protection — built or natural — will be completely fail-proof. Different approaches will be required for specific contexts. Moreover, we will always need early warning systems and effective evacuation strategies to save lives. Cuba’s low mortality rates following recent hurricanes have been attributed to their highly effective emergency management systems.

These and other factors like education and local building codes must be integrated into broader sustainable development planning with input from the social, physical and natural sciences.

One thing is certain: conserving nature is now no longer just about saving wildlife and wild places. As the past decade’s storms have made devastatingly clear, it can save people, too.

Dr. Jane Carter Ingram directs the Ecosystem Services Program of the Wildlife Conservation Society in New York City, where she works with partners around the world to identify and develop innovative approaches for supporting rural livelihoods and conserving biodiversity through the sustainable management of ecosystem services.