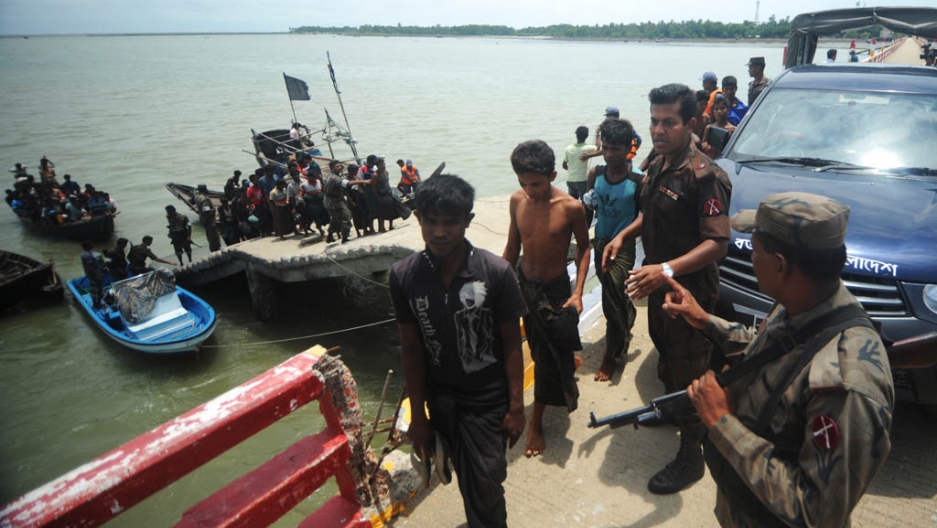 Rohingya Muslims from Myanmar wait in a line in Teknaf after their boat was intercepted while trying to cross the Naf river into Bangladesh to escape sectarian violence on June 18, 2012. Just over a year ago, the Bangladesh/Burma border was closed, and Bangladesh was coming under increasing international pressure to open its border to Rohingya.
Credit: MUNIR UZ ZAMAN
Share

Bangladesh has decided to close its border with Myanmar to prevent the passage of the country’s Rohingya Muslims who are seeking refuge from persecution by majority Buddhists, the Dhaka Tribune reported  Friday.

Bangladesh’s Minister of Foreign Affairs, Dipu Moni, made the declaration to the House of the Nation—the country's supreme legislative body—on Thursday, saying that the “infiltration” had put pressure on Bangladesh, and so the government would take legal actions against any “illegal infiltrators and those giving them shelter.”

“Given the recent unstable situation in the Rakhine state, the foreign ministry has adopted measures to immediately seal off the Myanmar border to stop the infiltration of the Myanmar nationals for national interests,” Moni told parliament.

She said the government had already made locals along the border aware of the situation, and given law enforcement agencies instructions on taking legal action against those who do not comply.

Moni rationalized the decision by saying that Saudi Arabia—where approximately 2.5 million Bangladeshis work—“and the other Muslim countries” are sympathetic to the plight of the persecuted Muslims.

The move has come at the start of what the United Nations last week called the “annual and often deadly exodus” of people from Myanmar’s Rakhine state— a period of migration that typically begins in November when the seas become calm.

According to Dan McNorton, a spokesman for the UN High Commissioner for Refugees, more than 1,500 people have fled the inter-national violence in Myanmar in the last two weeks.

This weekend a boat carrying 70 Rohingyas sank off Myanmar’s western coast. Only eight survivors have been found.

Images of stateless Rohingya Muslims are currently on display at the Washington DC Holocaust Memorial Museum, being projected onto its outside walls, in hopes of spotlighting the tragedy.

Myanmar has called the exhibit “inappropriate,” but the photographer, Greg Constantine, says the work is necessary.

“It’s disturbing that at a time when there are so many conversations on the perceived amazing developments in Burma, this tragedy has been overshadowed by everybody’s interest on what’s been happening elsewhere in the country with democratic reforms,” Constantine said.

Human rights groups have condemned the sectarian violence between ethnic Rakhine Buddhists and Rohingya Muslims, which has killed some 240 people and forced hundreds of thousands to flee, throughout Myanmar’s ongoing democratic reforms. Ironically, Rohingyas are denied citizenship in Myanmar and often seen as illegal immigrants from Bangladesh.