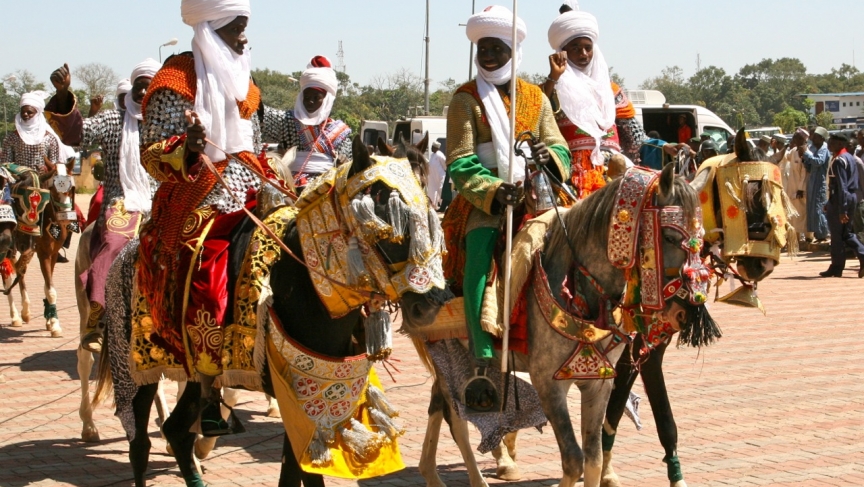 A parade during the introductory ceremonies of the 4th International Conference of the Forum for Cities in Transition.

Soldiers with automatic weapons flanked our convoy and armored personnel carriers guarded the entrance as we arrived at the opening of a peace conference here.

This city, which has been a flashpoint in Nigeria’s ongoing violence among Christians and Muslims and a counter-insurgency campaign against Islamic militants, is serving as host of the 4th International Conference of the Forum for Cities in Transition.

The gathering brings together some 200 delegates and observers from divided societies around the world, including Lebanon, Kosovo, Northern Ireland, Iraq, Israel and Palestine, who’ve come to share lessons learned on strategies of reconciliation and the arduous process of restoring trust in conflict-torn countries.

This northern Nigerian city itself has some important lessons to impart.

Kaduna has carved out a reputation as a flickering light of inter-faith cooperation among Christians and Muslims in a country in the dark throes of an escalating war that has already claimed the lives of more than 5,000 people since it erupted in 2009.

About half of these victims in the conflict in Nigeria were killed by the feared rebels of an al Qaeda-inspired group known as Boko Haram, which targets Christians, Westerns and any Muslims it deems infidels as it seeks to impose Sharia law.

The peace conference itself is considered a target, and thus the intense security precautions.

The other half of those killed in the violence here are a mix of Boko Haram rebels and civilians caught in the crossfire as the Nigerian military pursues an aggressive — and some critics would say indiscriminate —counter-terrorism campaign.

“Our state and our entire country are currently faced with an unprecedented level of insecurity and threat to the sanctity of human life. But we have also seen great examples of courage and faith in confronting these threats,” said Kaduna State Governor Mukhtar Ramalan Yero as he welcomed a crowd of hundreds of participants at a stadium with traditional parades that featured horses and marching bands and the exotic plumage of tribal leaders.

In welcoming the delegates, the governor thanked them for coming to share their stories of courage and faith as they found a way through the conflicts in their own countries, and he praised the concept behind the forum which is in its fourth year.

The forum is the inspiration of Padraig O’Malley, an activist, scholar and author who hails from Dublin, Ireland but who has for a half century put himself on the front lines of the struggle for peace in countries torn by violent conflict from South Africa to the West Bank to Northern Ireland to Iraq.

O’Malley is a professor of Peace and Reconciliation Studies at the McCormack Graduate School of Policy and Global Studies at the University of Massachusetts Boston, but his lifelong passion and commitment is conflict intervention.

Founding director of the Forum for Cities in Transition, which is an initiative of UMass Boston, O’Malley has dedicated years of field work and scholarship refining a strategy that, as he put it in his opening remarks at the forum, is a simple but profound idea:

“Cities that are in transition in countries divided by conflict are in the best position to help other cities in transition in other such countries,” he said. “Through the process of sharing their narratives they can learn from each other and create a dynamic that becomes a catalyst for change.”

And so that is the work of this conference. The leaders and activists from these divided cities are sharing their lessons learned, what has worked and what hasn’t, in their efforts toward reconciliation and helping their post-conflict communities learn to live together again. And they are hearing from their hosts in the city of Kaduna as well which has spearheaded an inter-faith effort that has helped to reduce sectarian violence which has flared periodically since the mid 1990s, but which reached an unprecedented level in 2011 and 2012.

This week, I will be posting about the stories traded and the wisdom departed inside the panel discussions and breakout sessions in what feels like a cottage industry of entrepreneurs who are feverishly selling a priceless commodity: peace.

Listen to Charles M. Sennott's interview from Kaduna below: