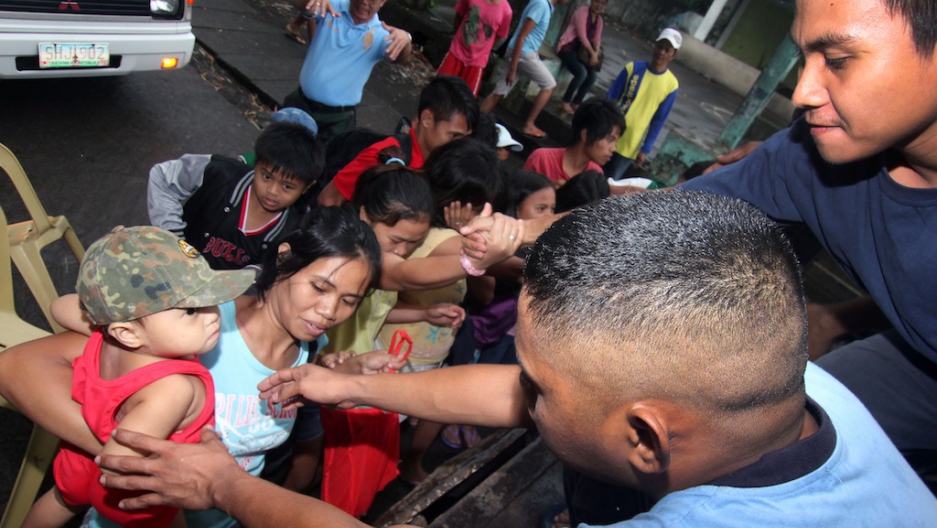 Residents of Legazpi city in Albay province, south of Manila, are evacuated on November 7, 2013 ahead of a super typhoon that was strengthening in the Pacific Ocean. Authorities warned Typhoon Haiyan, with wind gusts exceeding 330 kilometres (200 miles) an hour, could cause major damage across a vast area of the central and southern Philippines when it makes landfall on November 8.
Credit: Charism Z. Sayat
Share

MANILA, Philippines — The Philippines is no stranger to calamity: The archipelago of 7,107 islands sits right atop the Pacific Ring of Fire and smack in the middle of the Typhoon belt. It is visited by an average of 22 typhoons annually, and has nearly as many active volcanoes.

Now, the world’s strongest storm of 2013 is barreling down on a vast swath of southern and central Philippines.

The massive Typhoon Haiyan — known as Yolanda here in the Philippines — is predicted to “pose a serious threat to lives and property.”

Prior to landfall, gusts of 190 miles per hour had been recorded. As it rages across the archipelago, the storm is expected to pack the impact of a category 4 or 5 hurricane, like Hurricane Katrina, with even more dramatic storm surge.

“The winds of Haiyan are equivalent to peak winds of the infamous Typhoon Tip,” reported AccuWeather, “known for having the lowest sea-level pressure ever observed on Earth and its massive size.”

For days, disaster mitigation agencies have been busy with preparations.

They know just what to do, as do the locals.

Less than a month ago, on Oct. 15, a magnitude 7.2 earthquake rocked the provinces of Bohol and Cebu and outlying islands in the Visayas region, the center of the archipelago. Strong aftershocks are still felt in these areas, some measuring 3 or more on the Richter scale, according to the Philippine Institute of Volcanology  and Seismology (PHIVOLCS).

A shallow temblor of similar intensity killed over 100,000 in Port Au Prince, Haiti in 2010. The Bohol quake claimed less than 100 lives, though centuries-old churches in the Visayas were sundered in the violence of shaking earth.

The disaster-prone Philippines has become adept at responding to calamity. Filipinos work together to get warnings and help where needed, using whatever tools are available to them — the internet, mobile phones, word of mouth, and even traveling from home to home.

Typhoon Haiyan is expected to hit the quake-stricken areas hardest, and that same sense of community, that instinct to band together to survive, is again fully operational.

Philippine President Benigno Aquino III has issued a statement over the government's Official Gazette website and over the Gazette's Facebook page. "Let us exhibit calm, especially as we buy our primary necessities, and as we evacuate to safer areas," Aquino said in his statement. "Let us coordinate and cooperate with the authorities. If you already know that you are in a hazardous area, evacuate. To those in the coastlines: Do not go out to sea; let us not test the situation, so as not to put the lives of rescuers in danger."

The Philippine Red Cross and the National Disaster Risk Reduction and Management Center (NDRRMC), as well as PAGASA, have been broadcasting hourly situation reports and storm-surge warnings for coastal areas since Thursday morning, even as they deployed first responders, social workers and meteorologists to areas where they are likely to be needed.

The Philippines' Department of Science and Technology is helping Filipino netizens keep track of and consolidate all the government's updates on the typhoon and the dangerous storm surges through Project NOAH. The storm surge is expected to swell between four and thirteen meters (14 and 43 feet) high, and Project NOAH lists these warnings in detail and updates them as necessary.

In a nation so precariously perched, preparation is the key to survival. The Philippines has been called the "texting capital" of the world, because most Filipinos own no less than two mobile phones, and keep in touch via SMS and social networks using these handsets.

And fingers are extra-busy at the moment, as families ensure that each member is prepared.

Nearly 30 million of the country's total population of almost 100 million are online and using social networks like Twitter, Facebook and Google+, as well as internet voice call apps like Skype and Viber to call family and friends in the danger zones.

Using these tools, Filipinos are working to quickly pass on warnings and government situation reports, coordinate community efforts with local government units to ensure evacuation from the most dangerous areas and share tips for weathering Haiyan's fury.

They are also using these tools to provide comfort, support and synergy in prayer — a digital “bayanihan” (shared workload/burden) effort that has always helped Filipinos survive to overcome the aftermaths of storms, earthquakes and violent volcanic eruptions.

Whatever happens as the storm unleashes its wrath, Filipinos can be reassured that they’re prepared to weather yet another storm.

And they will endure it together.

Alma Anonas-Carpio is associate editor of the Philippines Graphic magazine.