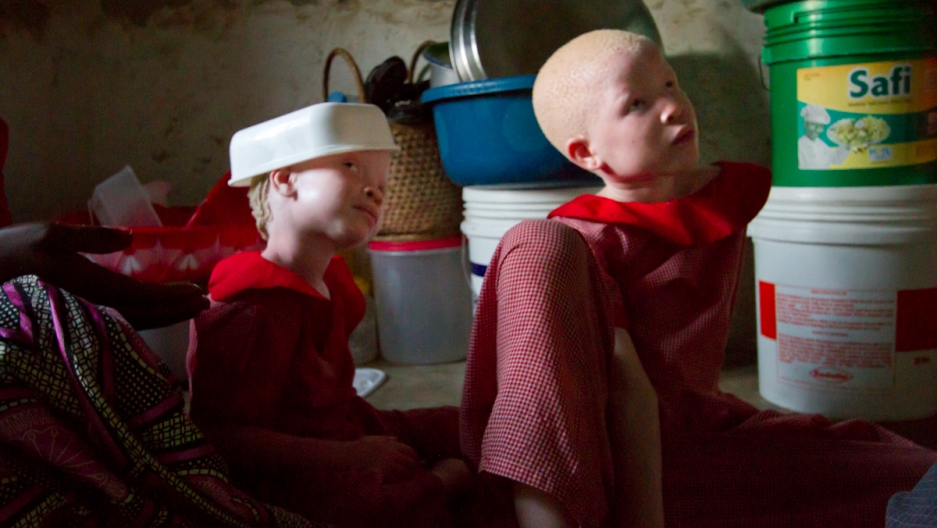 Zainab Muhamed's daughters play in their Dar es Salaam home, where the family fled after unfamiliar men attempted to enter their previous home in southern Tanzania. One year ago, a different group of men arrived here demanding to see one of the daughters, presumably with sinister motives relating to her albinism.
Credit: Jacob Kushner
Share

DAR ES SALAAM, Tanzania — One October night in Tanzania’s southernmost Mtwara region, a group of men with their faces covered pounded on the wooden door to Zainab Muhamed’s home and told her to open up. They would not say what they wanted — but it was obvious.

Muhamed had just given birth to the second of two daughters with albinism — a genetic abnormality resulting in an absence of pigment in the skin, hair and eyes that makes the bearer appear extremely pale.

Today, many in rural Tanzania still believe that procuring the arm, leg, fingers, skin or hair of an albino person and brewing it into a potion will make them rich. Tanzania’s deep-rooted superstitions about albinos surfaced in 2006 as a wave of violence against them erupted across rural parts of the country.

Since then, “these myths have resulted in 71 documented deaths in Tanzania, 38 attacks including deaths in other African countries, 32 attempted murders with some victims left mutilated in Tanzania and other parts of Africa,” particularly Burundi and Kenya, according to a 2012 report by the albino advocacy group Under the Same Sun.

In Tanzania, police prosecuted suspects in just five of those 71 murder cases as of last year.

When Muhamed gave birth to her first albino daughter in 2007, people told her it would bring her problems.

“My relatives were asking, you have this daughter and you know she is albino, why don’t you get rid of her?” says Muhamed. “Its because albino kids were not welcome in the community. It was the first albino there.”

When Muhamed had a second albino daughter two years later, her husband left her that same day and never came back. Within days, the strange men arrived at her door.

An estimated one in 20,000 Africans are born with albinism, making its prevalence on the continent about ten times that of Europe and North America.

The plight of albinos in Tanzania made international press when word spread of an attack on Mariam Staford, an albino woman and mother who had both of her arms chopped off in a 2008 attack.

“While she was in the hospital, they attempted to attack her sisters and they stopped attending school,” said Anna Nyamubi, who is supporting those two girls and is now one of Tanzania’s foremost advocates for albino rights.

Nyamubi helps run a boarding school in North-Central Tanzania for 250 albino children whose parents feared for their safety in their villages — or who gave away their albino children altogether.

“There were some attempts to get the kids. So some of the children had to quit school,” Nyamubi said. “It was due to traditional beliefs that you could use parts of their bodies in witchcraft to become rich, or if you are a cattle keeper you could get more cattle. Even the fishermen were using them to get more fish, they believed.”

Those most to blame for fomenting attacks on albinos may be witch doctors who continue to persuade undereducated, desperately poor farmers that albino body parts are powerful ingredients in muti, the practice of spiritually based medicine and charms. The only solution, say advocates like Nyamubi, is to empower rural communities to combat such beliefs with logic.

“We say they should use reason. If it’s a question of agriculture, if we have a problem of drought, we have to work together to find a solution, use proper techniques to grow more. But don’t think that through witchcraft we can gain,” Nyamubi said.

“Before, we couldn’t share the same seats on a town bus for example. If I sit here, no one will set next to me,” said Abdilm Omari, treasurer of the 12,000-member Tanzania Albino Society based in Dar es Salaam. Omari says it used to be that people wouldn’t patronize businesses owned by albinos, or wouldn’t employ them at all.

But today, “There is less ignorance,” he says. Discrimination toward albinos seems to have declined drastically since the passing of the April 2010 Persons With Disabilities Act, which explicitly forbids employers from discriminating against albinos and even requires companies to allocate at least 3 percent of their positions to people with disabilities.

That law was championed by Al-Shaymaa Kwegyir, Tanzania’s first albino member of parliament.

From the living room of her apartment in downtown Dar es Salaam, Kwegyir recalls growing up in Tanzania’s coastal Tanga region, where children would marvel at the color of her skin.

“Other kids they were teasing me, pinching me, spitting on me,” she recalls. “I asked my mother, 'Why am I like this while my brothers are black? Why am I white?' She said, 'It’s normal, don’t worry, it’s just a color.'”

When Kwegyir first ran for parliament in 2005, “people said, how can we choose such a woman with that color?”

Kwegyir lost the race, but was later appointed women’s representative for the district by Tanzania’s president, Jakaya Kikwete. She won election to the seat in 2010 and says that Tanzania’s cities have progressed since the days of discrimination she knew as a student in a private Dar es Salaam school.

She says the most significant challenges facing urban albinos today are no longer societal, but medical: Most albinos have poor vision due to lack of melanin, or color, in their irises. Many countries recognize albinos as legally blind. The condition also makes one’s skin prone to severe sunburns and skin cancer, treatment for which is too expensive and out of reach for many Tanzanians.

But even here in Tanzania’s capital city, traditional beliefs about albinos have not yet been uprooted entirely.

The day after men came pounding on her door, Muhamed, the mother of the two albino girls, fled with her daughters from their village to a slum on the south side of Dar es Salaam where they have lived ever since.

“I came here because over there, my children were chased by the criminals,” Muhamed said.

But last year, it happened here, too: One day while Muhamed was out, three unfamiliar men arrived here and aggressively demanded a neighbor take them to see the children. The neighbor hid Muhamed’s older daughter, who was at home, before showing the men to the empty house. The men eventually left, and she reported the incident to police.

These days, she says she rarely takes her two daughters beyond the yard of her house for fear of attracting more attention.