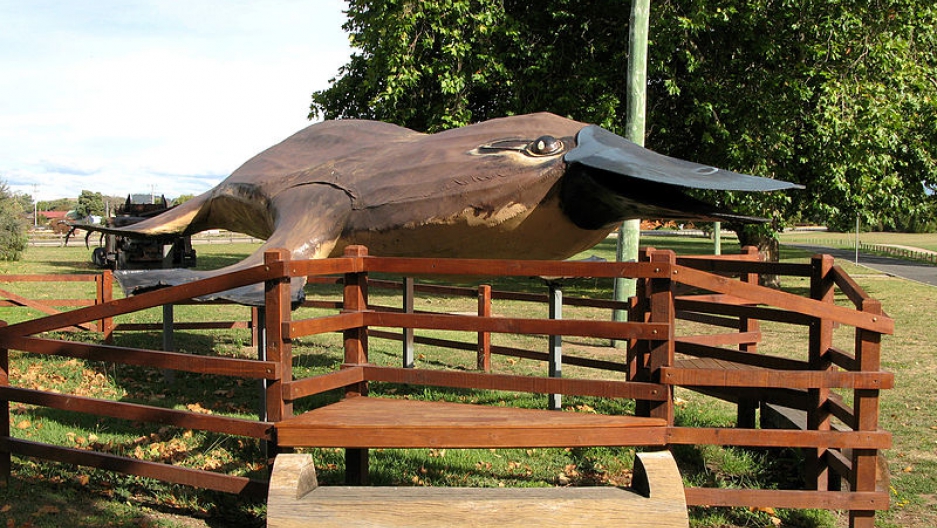 Platypuses aren't generally known for either their ferocity or their taste for the flesh of the living, but the newly described Obdurodon tharalkooschild proves the species family had a past that was decidedly nastier. Or at least bigger.

Scientists at the University of New South Wales in Australia describe the obdurodon as over a meter in length with very well-developed teeth, meaning it likely survived on a diet of crayfish, frogs, small turtles and other unfortunate swimmers.

The modern version only has hard pads inside of its bill as an adult, and uses gravel to help it chew its diet of largely shrimp, insects and larvae.

“Like other platypuses, it was probably a mostly aquatic mammal, and would have lived in and around the freshwater pools in the forests that covered the Riversleigh area millions of years ago,” said UNSW Associate Professor Suzanne Hand in a press release. The full paper has been published in the Journal of Vertebrate Paleontology.

Platypus teeth aren't common in the fossil record, but are fairly easy for researchers to identify if they know what to look for, said obdurodon discoverer and Columbia University PhD candidate Rebecca Pian to LiveScience.

"The overall shape of it, including the arrangement of the bumps on the top of the tooth, the way that those are arranged in a distinct shape, and the arrangement, shape and size of the roots are all distinctive," said Pian. "At least to somebody who knows what they are looking at."

Modern platypuses may be smaller, measuring a maximum of 20 inches and weighing up to 5.3 pounds. But they're no pansies: these elusive, curious looking beasts have a venomous spur on their hind legs, which can deliver a painful punch.

Only the males develop venom, and only during mating season, writes PBS — meaning that scientists hoping to find out more about one of the only venomous mammals are faced with a distinctly tricky situation. We wish them the best.

Here's a brief National Geographic video, looking at how platypuses hunt. Hint: that bill isn't what it seems.