Eric Jarosinski, the University of Pennsylvania professor behind Nein Quarterly

Here are a few Nein Quarterly quips: “What's so awesome about nihilism? Nothing.”

“You call it happiness. I call it Acute Despair Deficit syndrome.”

“My Doppelgänger wants to start resembling other people.”

The man behind the Twitter feed is Eric Jarosinski, a German professor at the University of Pennsylvania in Philadelphia.

Jarosinski grew up in a small town in Wisconsin. His early experience with German culture came in the form of kitschy folk fests and polka nights, but he got to know the real Germany after spending time in the country and mastering the language.

"German for me was a lot like learning math, which I was resistant to,” says Jaronsinski. “But I learned that it became something very different after I could make the language my own in some form and, in fact, that's something I encourage my students to do is to make puns in German.”

Puns and word play are trademarks of Nein Quarterly. His jokes jump from Marxism to pumpkin spice lattes — all told from the perspective of a depressed German philosopher pining for another time and place. It's a persona Jarosinski loosely models on the real German philosopher Theodor Adorno, who died in 1969. 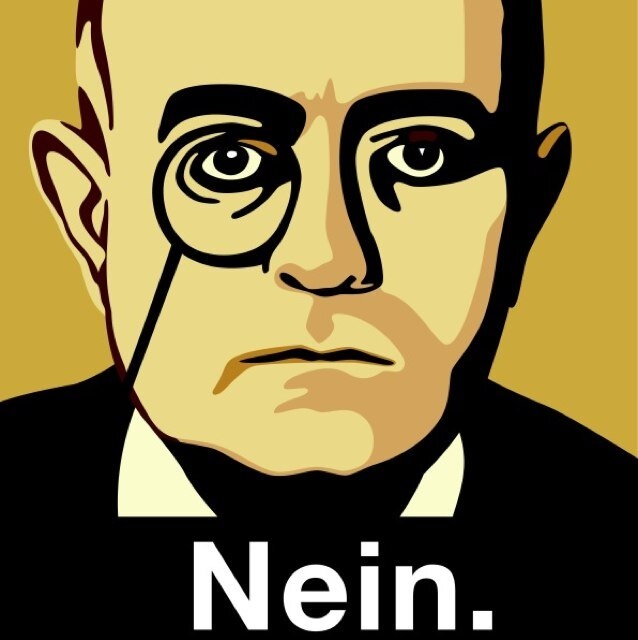 Jarosinski says he started Nein Quarterly over a year ago as a way to relax while writing a book about the concept of transparency. “Essentially this gave me a voice at a time when I found there was very little I could put on paper but there was a lot that I could type into my iPhone,” he says.

What started as a lark has turned into something more serious. Jarosinski is in Germany to meet with publishers to talk about future writing projects. Interest in Nein Quarterly is running high in Germany at the moment, especially among intellectuals.

Elka Sloan, a professional translator in Frankfurt, reads the Twitter feed for the word play. “The plays he does with sort of nihilist statements, the way he twists around famous quotes from philosophy and the way he breaks the German intellectual tradition through this satirical lens is, I think, the hilarity of it,” says Sloan.

It got Helmut Wicht laughing too. He teaches anatomy at Goethe University in Frankfurt.  “I think the first tweet which actually made me follow him immediately was the famous one it must have been like a year ago on philosophy,” he says. “Three lines. First line: 'Ontology – what the f---? Epistemology – Why the f---? Phenomenology – The f---.'" (In the original tweet, Jarosinski spelled out the f--- word.)

"And in that very moment," says Wicht, "I hit the follow button.”

Wicht says Jarosinski has found Germany's enigmatic funny bone. He jokes like an insider. “He is playing with that. He gives us the feeling that ultimately, finally, there is someone out there in the Anglo-Saxon world who loves and understands us.”

Jarosinski is raising money to support a Nein Quarterly blog he plans to launch at the end of this year. He'll feature writing from many different contributors. He describes the blog this way on his website: “Words. Thought. Art. Umlauts. Despair.”