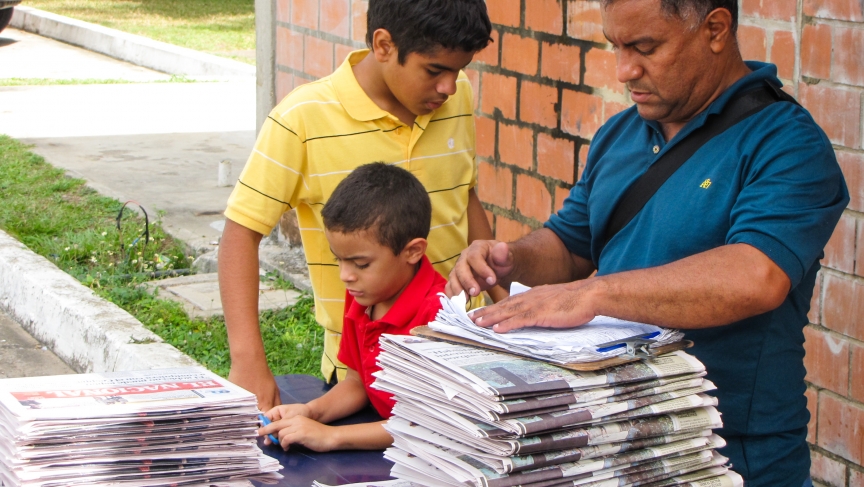 Jose Luis Farrera (with his sons) runs a newsstand in Venezuela. But business is down, because he can't get enough newspapers.

Jose Luis Farrera sells newspapers in Maturín, in Venezuela’s oil heartland. But he says lately, he can’t get enough papers to supply his customers.

The problem isn’t a lack of interest; it’s a shortage of newsprint.

After the death of President Hugo Chávez in March, inflation soared in Venezuela. In addition, strict government control has caused foreign currency — especially the US dollar — to become increasingly scarce. That’s a problem because even in a country that has a hostile relationship with the US, dollars remain paramount for importing goods.

Now everything from cooking oil to toilet paper is in short supply — even newsprint. That shortage is hitting the smaller regional newspapers especially hard. One paper recently ran a headline, “There’s No Newsprint.”

"It's incongruous that the policies of a government that's striving towards socialism depends so much on the dollar,” says Tinedo Guía, president of Venezuela's National College of Journalists. He blames the paper shortage on the government’s failure to free up dollars to the newspaper industry.

Some newspapers have already had to shut down. Reporter Maybe Gutiérrez, who worked at El Sol, Maturín's oldest paper, was one of 20 employees laid off in September when the daily ran out of paper.

"It caught me off guard,” she says. “In the span of two days, we were guaranteed our jobs, then told we had to leave. It's a huge shock."

National newspapers aren’t doing much better. According to the National College of Journalists, the lack of newsprint has forced 38 papers to reduce their page count. The presses at El Nacional, one of the country's leading dailies, are still running, but Miguel Ortero, the editor, says the paper is in serious trouble.

It’s not clear if the government can supply newspapers with foreign currency to import newsprint, he says, or if it even wants to. But he adds that if they don’t get foreign currency soon, they won’t last through the end of the year: “That's a reality. I imagine all the other newspapers are in the same situation."

Some observers wonder whether the Venezuelan government, led by Nicholás Maduro, wouldn’t mind if the paper shortage drove some newspapers out of business. Former president Hugo Chávez closed dozens of radio stations and a number of cable news channels during his 14-year tenure, which has left the print media as the most vocal critic of the government. Tinedo Guía, president of the National College of Journalists, says he’s very concerned.

The Maduro government isn't commenting one way or another. So, for now, newspapers continue to shrink their page counts as they wait to get their hands on foreign currency.

One temporary solution might be for them to focus on their digital editions. But editors point out that very few people in Venezuela read the news on computers or mobile phones. For their customers, the print edition is still what matters.