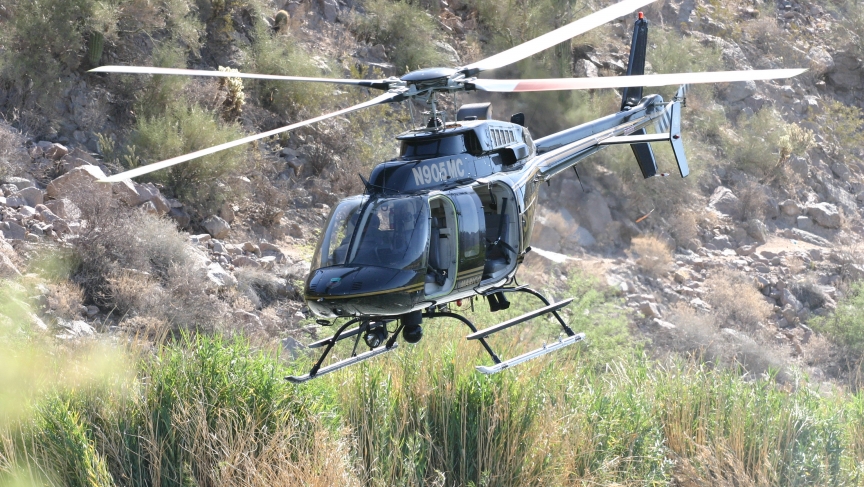 Maricopa County Sheriff's Office has its own helicopters for search and rescue operations, including rescues of illegal border crossers who call 911 dispatchers in the county.

Workers at 911 dispatch centers say most calls from migrants typically begin the same way: "I’m lost in the desert and I haven’t had water in days."

The callers are usually Spanish speakers and their cell phone reception can be poor.

One man, who said his name was Joel, called for help in the middle of a June day when the temperatures hit the triple digits.

“We are dying,” he said in a quick, panicked voice in Spanish. “We need help.”

On the other end of the line was a dispatcher in Arizona, at the Maricopa County Sheriff’s Office. He also looped in a Border Patrol agent. The two agencies often work together to rescue migrants. But the remoteness of the desert region and the kind of phones that migrants tend to carry can make it hard to trace their location very precisely.

Joel couldn’t see any identifying landmarks near him. He said he just saw low hills made of rock.

“North, south, east, west — they have no clue,” Busch said, adding that these callers often say, "All I see is mountains.”

Busch works in Phoenix, more than 115 miles from the border. But this summer, she and her fellow 911 dispatchers helped rescue more than 30 people in a remote corner of the county. It’s a growing phenomena, as more migrants take longer, riskier routes to avoid detection.

In Arizona, many migrants are trying to make their way to an interstate more than 80 miles from the border. Smugglers might drive them for portions of the way, but the migrants also often walk long stretches to avoid US Border Patrol checkpoints. Sometimes they are abandoned, or get lost along the way.

Rescue missions can take hours and cost thousands of dollars. Time is of the essence, though, since once migrants call for help, they are often already suffering from dehydration, heat stroke or hypothermia.

That same day in June, when the migrant named Joel called for help, Busch got a call from another group a little while later. They were already sick and fainting from the heat. Busch gave a pep talk to one young man named Heliberto.

“Listen to me,” Busch said. “I know you think you can’t make it, that you are in bad shape.”

She went on to promise them that she wouldn't fail them, that she was sending a helicopter.

“Do they know where we are?” Heliberto asked. “Do you swear to me?”

“I thank you with all my heart,” Heliberto said.

Yet when the helicopter got to the area, it located a different group of lost border crossers and rescued them first. One of the men who had called 911 earlier called back desperate, convinced he was going to die there.

“He wanted to give me numbers, addresses, his wife’s name, his kids,” Busch said. “And I’m like, no, that is not what I do. I am not going to do that because you are going to survive.”

Busch does check to see what happens at the end of a rescue, after she is no longer on the phone. That particular rescue took more than seven hours, and ultimately wound up locating over a dozen migrants who had called for help.

“They did make it to Border Patrol,” Busch said. “They got medical help. And from there, you know, I’m sure they were taken back. But they all made it. Thankfully.”

The Maricopa County Sheriff’s Office recovered 17 bodies in the same area this summer. More than 160 bodies were discovered statewide in the past year.