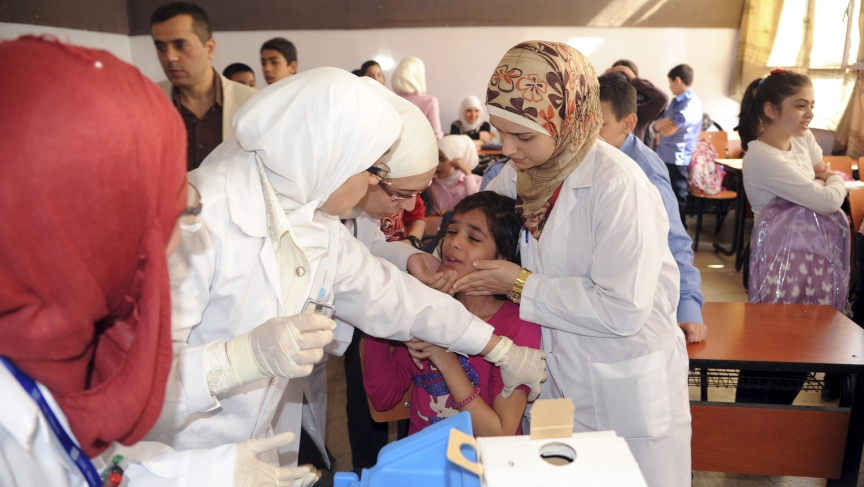 Syrian health workers administer polio vaccination to a girl at a school in Damascus, in this photo taken by Syria's national news agency SANA in October.

Until the outbreak of Syria's civil war three years ago, it looked like polio had been eradicated there. The last reported case was in 1999.

But now, the World Health Organization (WHO) has confirmed that ten Syrian children have been paralyzed by the virus. All of those affected are under the age of two.

BBC reporter Lyse Doucet is in the capital, Damascus. She sees polio as among the most heartbreaking of Syria's tragedies.

"You hear the hopes of Syrians, especially the youngest Syrians, that someday this war will end," Doucet says. "But for the children with polio, the impact of the war will be with them for the rest of their lives."

The confirmed polio cases are in Syria's rebel-controlled north. Syria's Social Affairs Minister has lost no time in pinning the outbreak on foreign fighters who have come to the country to wage jihad. The World Health Organization has not finished sequencing the Syrian virus, so its origins remain unclear.

There is no treatment or cure for polio.

Syria's government has vowed to launch an immunization campaign to "protect all children in Syria." But the regime hasn't said whether children in rebel-held areas in the north, along the border with Turkey, will be included.

Before the outbreak of civil war in Syria, some ninety-five percent of children under the age of 5 had received the polio vacine. But since the fighting began several years ago, many parts of the country have been left out of the immunization process.

The outbreak of polio is part of what Doucet calls a "war on society."

"It is the war of our time and there's not that many countries around the world who aren't involved one way or the other," Doucet says. "I saw one neighborhood on the edge of Damascus which looked like an earthquake zone. Syrian troops were on one side, the opposition fighters were on the other. They fought house-to-house, street-to-street. There is nothing left there, and that is Damascus in the 21st century."