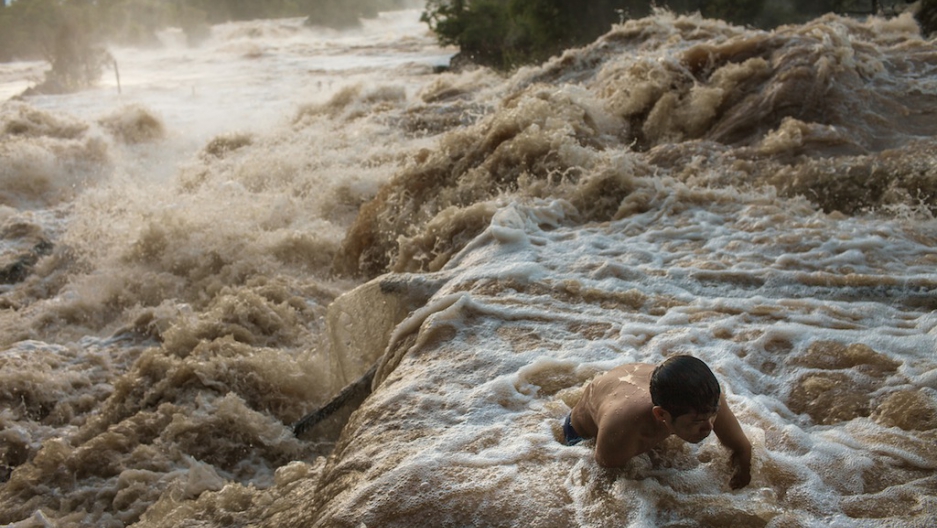 A fisherman fights the current of Khone Phapheng falls to clean debris from a "Ly Trap" - a traditional bamboo trap. The falls — Southeast Asia's biggest — are a major tourist draw. The planned Si Phan Don dam would re-route part of the river, depriving the falls of water.
Credit: Thomas Christofoletti/Ruom
Share

SI PHAN DON, Laos — They might not be as adventurous as Flipper, but every couple minutes the light gray head and back of a freshwater dolphin breaches the surface.

These aren't trained sea mammals in a theme park. We’re in southern Laos on the mighty Mekong, Southeast Asia’s powerhouse river. Globally, it’s second only to the Amazon in fish diversity.

The Mekong is also the natural habitat of the endangered Irrawaddy dolphin.

The 4,000 islands region, as it’s known, is home to one of  world’s biggest Irrawaddy dolphin pools — a whopping 11 individuals.

Foreigners come to munch fried rice, dangle their feet in the tepid chocolate-colored waters and watch these vanishing mammals swim just 50 feet from the riverside. Set amid the lush rain forest, emerald rice fields, homes on stilts and golden-roofed Buddhist pagodas, it’s hardly surprising that this region is attracting tourists.

At least for the moment.

With the hush of waterfalls in the back, it’s a sublime experience, even for locals like Kem At, who operates a slow-moving tour boat big enough for 10 tourists to squeeze in.

“The Mekong dolphin doesn't jump,” At patiently tells tourists, smiling as he watches one of the dolphins cut the surface.

This month, workers will begin constructing a 100-foot-high, 256-megawatt dam that will eventually tower over the river, according to a communiqué filed by the Communist government.

Within the next year, scientists say, these dolphins will almost certainly be wiped out. Soon after, millions of fish in southern Laos will perish as well.

Environmentalists contend that the dam will threaten the livelihood of about 60 million people in Laos, Thailand, Cambodia and Vietnam, who depend on the Lower Mekong as a main source of income, nutrients and cultural identity.

The dolphins, said Ame Trandem, Southeast Asia program director at advocacy group International Rivers, would be the first ones to feel the impact, as 95,000 truckloads of sediment are removed to build the dam, changing the hydrological balance of the Mekong.

It is unlikely that they will be able to adapt, she said.

“The dolphins are extremely sensitive so these changes will likely lead to their extinction — definitely for the area, possibly for the whole river,” Trandem said.

Little more than a mile north of the dam, the Khone Phapheng waterfalls, the largest in Southeast Asia, will be robbed of much of its water, Trandem said. Eventually the falls, which are the region’s major attraction aside from the dolphins, would draw fewer tourists as well.

The dam will also block migratory fish — which make up 70 percent of Mekong fish — from swimming up and down the Mekong.

“The Don Sahong will be built on the only channel where fish can migrate year round,” she added. “That’s why it’s so risky to build it here, where there’s a maximum concentration of fish. It’s located on the worst imaginable channel.”

Laos, one of east Asia’s poorest countries, has been working for two decades on plans to construct a total of nine dams on the Mekong. Although electricity is available throughout the 4,000 islands, most locals live in wooden, one-room huts on less than $1 per day. Light bulbs are an unaffordable luxury. For the most part, locals are off the grid.

So far, only construction on the $3.8 billion Xayaburi, in northern Laos, is under way. The Don Sahong, which is located only 1 mile from the border with Cambodia, however, will have a much larger impact on migratory fish.

“The Xayaburi will have an impact on fisheries but not to the same degree as Don Sahong. A lot of fish come from the Tonle Sap [lake and river in Cambodia] and migrate up and they can't do that anymore,” Trandem said.

Although the Don Sahong will be constructed and later operated by the Malaysia-based Mega First Corporation Berhard, the project's director, Yeong Chee Neang, said that the electricity will be sold to the Lao government.

“It will be better because the dam will make it possible for fish to swim up and down, and that has been proven by our consultants and experts,” he said, adding that fish would use fish passages the company intended to build on nearby channels.

A letter sent by 34 international scientists to the Lao government in 2007, however, said that the dam’s impact on fisheries and human livelihoods would “far exceed the net return from the project,” and that it was not in the best interest of the people of Laos, Thailand, Cambodia and Vietnam.

Ian Baird, an assistant professor of geography at the University of Wisconsin-Madison, who helped coordinate the letter, wrote in his research that nutritional impacts would hit the already malnourished fishermen and their families hard.

“The [Don Sahong] would cause serious human nutritional problems throughout the Mekong Region, as wild-caught fish are the most important source of animal protein for people living along large rivers and streams in the basin. In addition, decreasing availability of fish in the marketplace would lead to higher prices, reducing fish consumption, especially by poorer consumers unable to afford fish,” he wrote.

For most locals and the thousands of fishermen in the area, the change is hard to imagine. Perhaps the fish will find an alternate channel to migrate, and perhaps the dolphins will survive.

“They [dolphins] have always been here,” At said, smiling as another dolphin popped up. “They can’t be gone.”