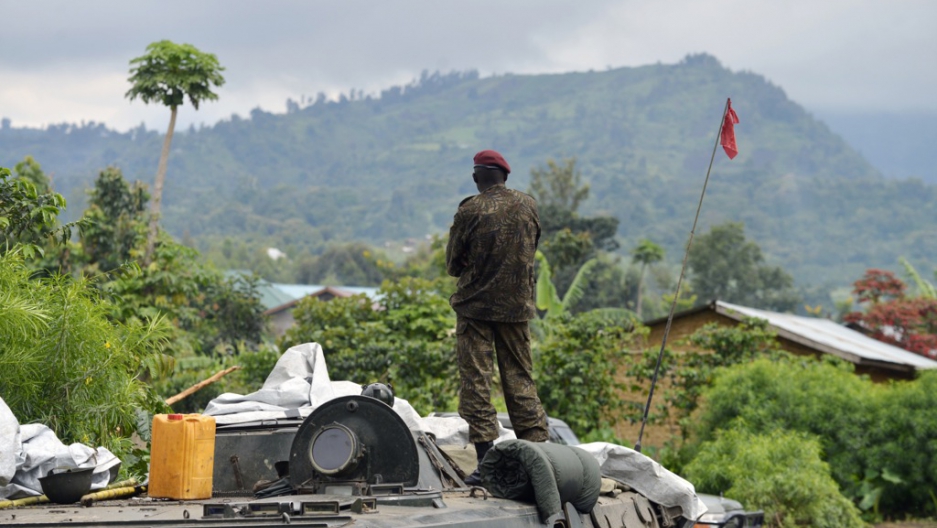 A Democratic Republic of Congo soldier in Rutshuru on November 4, 2013, after the army recaptured the area from M23 rebels. On November 5, the rebels declared that they would ended their armed insurgency after 20 months of conflict in eastern Congo.
Credit: Junior D. Kannah
Share

NAIROBI, Kenya — The M23 rebel group declared an end to its 20-month rebellion in the eastern Democratic Republic of Congo on Tuesday, saying it was ready to disarm its troops and pursue a political solution.

The movement has decided "to end its rebellion from this day forward and pursue, by purely political means, the search for solutions to the root causes that led to its creation," M23 leader Bertrand Bisimwa said in a statement.

"The chief of general staff and the commanders of all major units are requested to prepare troops for disarmament, demobilization and reintegration on terms to be agreed with the government of Congo."

The announcement came hours after government forces claimed "total victory" over the remaining M23 fighters, announcing that troops had driven them out of their last two hilltop strongholds before dawn.

The rebels have occupied a string of towns in eastern Congo for the last 20 months, at one point occupying the regional capital of Goma. In the past year, however, they have suffered a string of military defeats during an offensive by the Congolese army, backed by a United Nations peacekeeping force.

A peace agreement is due to be signed within days. At a regional summit on Monday, the Congolese government agreed with other African leaders that once the rebels had publicly renounced their rebellion, Kinshasa would formally accept the declaration and ink a peace deal five days later.

"In a region that has suffered so much, this is obviously a significant positive step in the right direction," the United States' special envoy to the Congo and Great Lakes region, Russell Feingold, told reporters on Tuesday. He cautioned, however, that the issues of an amnesty and reintegration of rebels into Congo's army would be key to any lasting peace agreement.

More from GlobalPost: M23 rebels in Congo: What a difference a year makes

Much will depend on the next move by Rwanda, which has been accused of supporting the rebellion since its start. The end of the M23's armed rebellion marks the first time in nearly two decades that there has not been a powerful militant group defending Rwanda's interests in eastern Congo.

Although Rwanda's government has strenuously denied supporting the M23, few outside the country believed them. United Nations investigators, human rights groups and journalists all gathered evidence to the contrary.

M23 was born out of a previous Rwandan proxy, the CNDP or National Congress for the Defense of the People, which was made up of mostly ethnic Tutsis. Former CNDP members accused the government in Kinshasa of backing out of a deal that was supposed to integrate the former rebels into the Congolese armed forces. They took the date of that deal, March 23, 2009, as the name for their new group.

It remains to be seen whether M23 will abide by its own promise to disarm, and how willing the Congolese government will be to hold political discussions after a rare and resounding military victory.

The whereabouts of the M23's military leadership is unknown at the moment, although there are suspicions that top commander Sultani Makenga may have sneaked across the border into Rwanda. If so, Kigali will have to decide whether to hand him over to Congolese authorities or give him safe haven, as happened to former CNDP leader Laurent Nkunda.

The defeat of the M23 presents an important opportunity to begin building a lasting peace in eastern Congo, but it does not mean conflict is over. There are many other armed groups in the mineral-rich region, not least the FDLR (Democratic Forces for the Liberation of Rwanda), an ethnic Hutu militant group whose leaders helped carry out the 1994 genocide and which Rwanda still regards as a threat — and a reason for continued meddling across the border.

Reuters and Agence France-Presse contributed to this report.