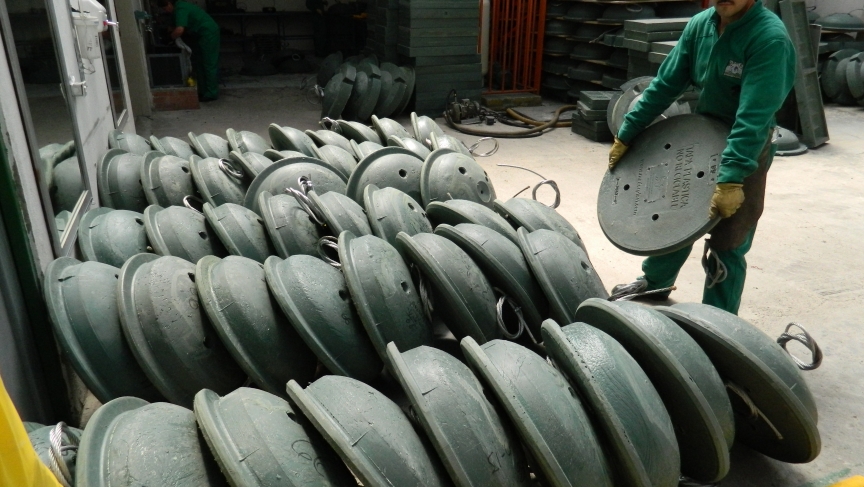 A worker at Maderplast in Bogota stacks plastic manhole covers. They're designed to replace the thousands of metal covers that thieves have been stealing to sell as scrap metal.

Manhole covers are not the easiest things to steal.

For one thing, they weigh more than 300 pounds. For another, they’re right in the middle of the street. Yet thousands of the covers are disappearing in Colombia every year.

Thieves, using customized trucks with holes in the floor, park over the manholes and pry off the tops, according to Jorge Izquierdo, a private investigator who tracks the thefts.

“These are well-organized mafias” Izquierdo says. “In just one day, they can steal 30 manhole covers containing nearly a ton of iron.

Global scrap metal prices are rising sharply, fueled by a demand from China. In Colombia, enterprising thieves nab the covers, melt them down for their iron content and sell them as scrap.

So many covers have gone missing that there are often gaping holes in the streets. Cars and trucks have to swerve around them, causing traffic and accidents. Pedestrians have to beware too.

“My daughter stepped into one of these street craters and broke her leg,” says Luz Marina Rairan, who sells cleaning supplies.

In a tragedy last month, 2-year-old Dayana Barrera was chasing pigeons in Bogota when she fell through an open manhole.

Dayana’s mother jumped in after her daughter, but the rushing water carried her away. By the time police found her, Dayana had drowned, washed about a mile through the city drainage system.

These kinds of accidents are happening in countries across Latin America, as well as Africa and Asia. In Beijing, so many covers are being purloined that authorities have installed pedestrian safety nets in some manholes.

To stymie thieves in Bogota, the city government is gradually replacing metal covers with non-recyclable plastic ones, made by a Bogota company called Maderplast. The plastic tops now plug about 20 percent of the city’s 300,000 manholes.

In response, the company installed satellite tracking devices in dozens of its new covers. It discovered they were being resold to unsuspecting public works departments in other parts of Colombia that wanted to shift to plastic covers.

Martinez says the thefts will continue unless those responsible are caught and jailed, something that rarely happens in Colombia’s overburdened legal system.

By contrast, China has taken a harder line. Martinez says during a recent visit to Beijing, Chinese officials told him manhole cover thieves there could face the death penalty.