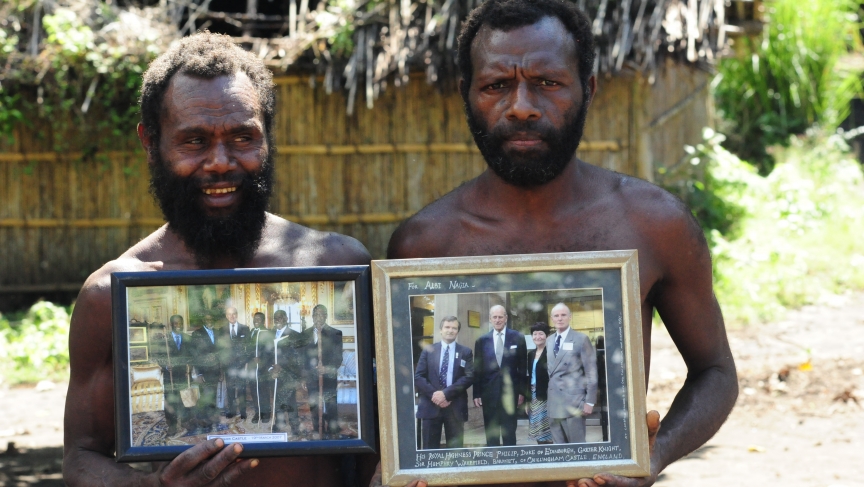 Some 40 years ago, Prince Philip visited the South Pacific island of Vanuatu with his uncle, Lord Montbatten.

The visit was largely unremarkable, except in one key way: a religious sect was born that views Philip as their god. Matthew Baylis recently chronicled that visit and the religion, which thrives even 40 years later, in his new book "Man Belong Mrs. Queen: Adventures with the Philip Worshippers."

"They had a jolly old time. They wore hawaiian shirts, they swam in lagoons, they took part in rituals. They sat on plastic chairs with 'throne' chalked on them. They rubbed noses with Tahitian lovelies," Baylis said.

Baylis grew up in the Liverpool area, some 9,800 miles away from Vanuatu. But he, too, was fascinated by the Duke of Edinburgh, even hanging up a poster of the Prince on his bedroom wall. When he was an anthropology student, he traveled to the South Pacific island nation to find out why the prince generated so much interest.

"In general, they [Prince Philip and Lord Montbatten] showed themselves to be very, very different from the colonial officials of which the people of that area had had the most experience," he said. "They showed themselves to be easy going, rough and ready, all-action guys and that's exactly the kind of man who they most admire in that part of the South Pacific."

Why Prince Philip? Baylis said the prince's visit coincided with the island's preparation for independence from the French and the British.

"People were casting around for allies, in the turmoil in these pre-independence years," Baylis said. The village of Tanna "felt it needed a symbolic and significant relationship with some sort of outside power in order to help them. So, at the same time that Prince Philip was there being a rough-and-ready, all-action kind of guy, these people were thinking 'we need to find someone who can be a patron and a figurehead for us.'"

And thus, a movement was born.

As a whole, said Baylis, the South Pacific islanders view foreign visitors in a very significant way. For example, on the island of New Hanover in Papua New Guinea, the islanders revere President Lyndon Johnson, whom they invited to represent them in Parliament.

"It was a quite deliberate slap in the face to the Australian authorities who were ruling the area quite badly," Baylis said.

Baylis said the Tanna village holds a ceremony annually to honor Prince Philip and even has a shrine dedicated in his honor. The prince has played into his role. The village has three signed photographs of the prince, as well as a number of letters, Baylis said.

The Duke of Edinburgh may not be not the most likeable member of the royal family, but that hasn't deterred the people of Tanna.

"They have a perfect explanation for it," Baylis recalled. "When I was there, I sort of said, 'you know, he's not tremendously popular in Britian,' and they said, 'yes, exactly, that's because he's from Tanna!'"