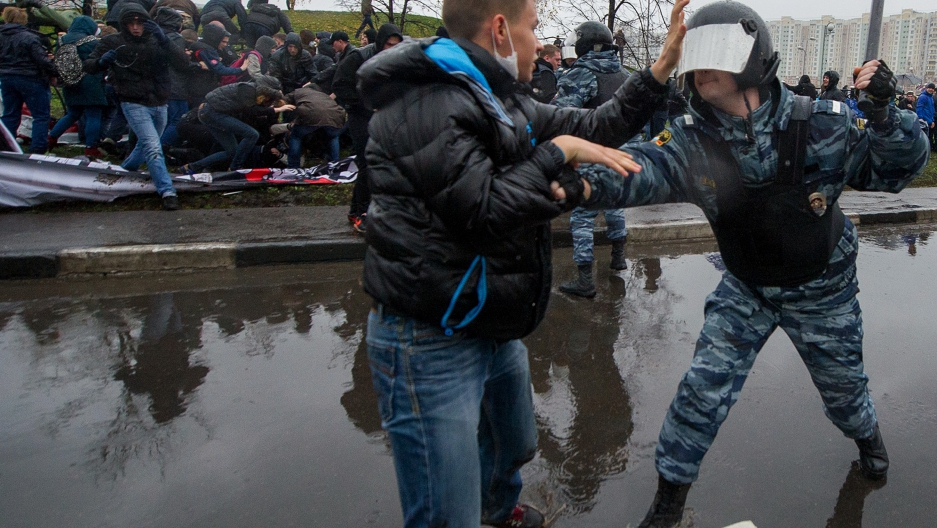 “It’s everywhere, it’s obvious to everyone,” he said, trudging through a brisk November downpour in a bleak, working-class suburb called Lyublino.

He’s far from alone: Kamensky was one of thousands of nationalists who swarmed the neighborhood’s wide boulevards like angry locusts on Monday to mark Russia’s Day of National Unity.

Officially, the civic holiday is meant to mark the conquest over Moscow’s Polish occupiers in 1612.

But thanks to events such as this officially sanctioned “Russian March,” it’s actually an annual reminder of the xenophobia that’s increasingly pervading society, directed mainly against predominantly Muslim migrant laborers from the Caucasus and Central Asia.

As the population continues to decline while economic incentives attract ever more workers from impoverished former Soviet republics, social tensions between ethnic Russians and the millions of legal and illegal migrants have ballooned.

They erupted into view last month, when the killing of an ethnic Russian, allegedly by an Azeri national, prompted hundreds of people to riot in another Moscow suburb.

The government has done little to stem the outpouring of anger or ensure that migrant laborers, whose unskilled and low-paid labor keeps the Russian economy running, are fairly processed through the immigration system.

That’s fuelled discontent with both migrants and officials.

“The government isn’t doing anything about it, and some officials have even made it their corrupt little business,” Kamensky said.

A recent poll by the independent Levada Center think-tank reported 27 percent of respondents as saying the influx of migrants is the country’s main problem — more than poor access to healthcare, education or rising drug use.

Russia’s relatively stable economic climate has attracted droves of migrants through its porous southern borders from Kyrgyzstan, Tajikistan and other post-Soviet states.

Although the Federal Migration Service (FMS) says there are nearly 2 million legal foreigners working in Russia, researchers estimate the real figure could be up to five times higher.

In Moscow and other major urban centers, they work as street-sweepers, construction workers and cigarette vendors—the kind of jobs most Russians don’t want to do.

But their presence has stoked fears among some ethnic Russians who believe the undocumented migrants are swooping in on jobs, boosting the crime rate and diluting the country’s national identity.

Scenes like those during the Islamic holiday of Eid al-Adha last month — when thousands of believers crowded the streets with their prayer rugs near Moscow’s tiny handful of mosques — typically elicit resentment from ethnic Russians.

“What are they trying to do? Show their strength?” Oleg Smirnov, a 58-year-old bearded protester, asked angrily. “We’re supposed to outnumber them on our own land.”

Such resentment periodically boils over into ethnic riots, as it did last month in the suburb of Biryulyovo, when hundreds of rioters attacked police, local businesses and a vegetable warehouse where many migrants worked.

Last summer, residents of the southern Russian city of Pugachev loudly demanded the expulsion of all local Chechens after a Chechen teenager allegedly stabbed a Russian man to death in a barroom brawl.

Some researchers say the anti-migrant sentiments are generated by a slew of insecurities that arose following the Soviet collapse two decades ago: Once a former superpower, Russia has since suffered from political crises, economic downturns and a persisting sense of discontent.

Levada Center head Lev Gudkov believes those experiences have left Russians looking for an enemy within to blame.

“These frustrations have resulted in a sense of empty assertiveness,” he says. “Russian nationalism has taken on a sort of defensive, compensatory character.”

The resentment is extended to internal migrants — many of them Russian citizens from the impoverished, war-torn North Caucasus region.

President Vladimir Putin’s heavy-handed campaign against Islamist rebels there in the early 2000s has increased the perception of Chechens and other Russian Caucasians as “outsiders,” he adds.

The authorities, for their part, have sometimes attempted to promote Russia’s multicultural character in an attempt to assuage the ethnic tensions.

More often, however, they send exactly the opposite signal.

Just last week, members of the ruling United Russia party submitted a draft law to parliament that would deport immigrants who are convicted of a crime, regardless of the severity.

Earlier last month, the city authorities responded to the Biryulyovo riots by raiding the local vegetable market and other locations in Moscow and detaining around 1,200 migrants.

Meanwhile, Mayor Sergei Sobyanin — who recently suggested that most of the city’s crime is committed by migrants — has ordered weekly spot checks for illegal residents throughout Moscow apartment blocs.

“The same people who created the current immigration laws are suddenly the first ones to speak out against immigration,” he says.

Other observers say immigration policy is broken for another reason.

Businesses that employ undocumented workers pay their illegal employees under the table and skimp on taxes. Meanwhile, police officers regularly collect bribes from frightened migrants they stop on the streets and the metro.

“Administrative agencies on all levels live off this,” the Levada Center’s Gudkov says.

Meanwhile, the scope of Russia’s ethnic resentment appears to be spreading. Resentful of illegal migrants, many Russians are also beginning to direct their rage at the authorities for effectively turning a blind eye.

“No one represents me, not the president, the government or the parliament,” said Pavel Monakhov, a 32-year-old protester hoisting an imperial Russian tricolor at Monday’s Russian March, shivering in the rain. “So this is the only thing I can do.”