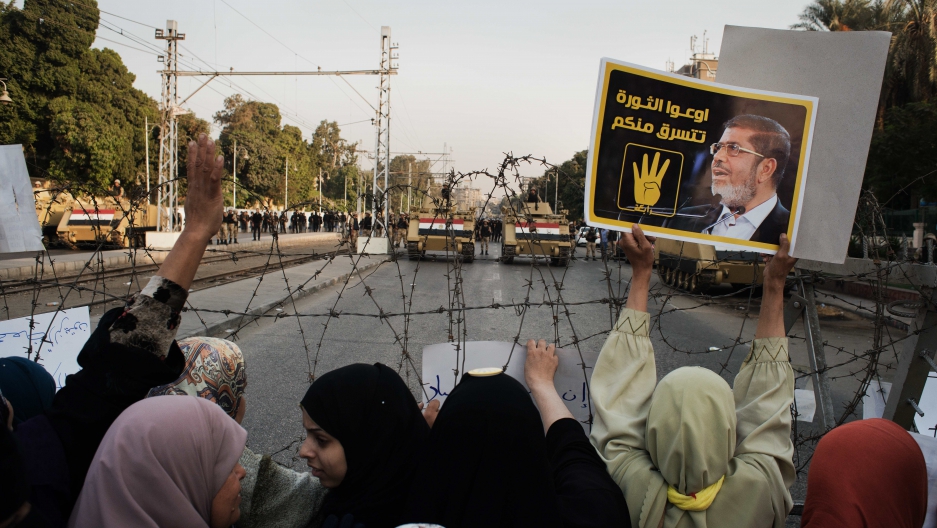 Hundreds of supporters of ousted president Mohammed Morsi rally outside the Presidential Palace in Cairo on Nov. 1, 2013. The pro-Morsi coalition that called the protests said it would also hold a rally outside the court where the former president is expected to appear for his trial on Monday, Nov. 4.
Credit: GIANLUIGI GUERCIA
Share

Former Egyptian president Mohamed Morsi went on trial Monday, four months after being ousted in a popularly-backed coup. He is accused of inciting the murder of anti-government protesters who gathered outside his palace in Cairo last December.

Morsi’s fall from grace has taken place at astonishing speed. Until early July, his Muslim Brotherhood was one of the most powerful political forces in the country, dominating ministry posts and the assembly responsible for drafting Egypt’s post-revolution constitution. Today, the movement’s ranks have been decimated by a bloody crackdown and mass arrests. Court proceedings involving a number of other senior Brotherhood figures have already begun. However, Monday’s event is the one that Egypt has been waiting for.

The trial takes place amid heightened security and clashes outside the courtroom are likely. While Morsi supporters are vowing to rally in support of their leader, Egypt’s interior ministry has promised to deploy up to 20,000 policemen around the courthouse.

So how did Egypt get here? Cairo-based correspondent Louisa Loveluck runs us through the background and explains why Morsi’s trial is so important.

Just over a year after he was elected through a popular majority, why is Mohamed Morsi on trial? What is he accused of?

Morsi was ousted in a July 3 military coup, following a single, disastrous year in office. Today, he will stand trial along with 14 others, including members of the Muslim Brotherhood-affiliated Freedom and Justice Party. The coup took place after Egypt’s military sided with millions of protesters and stepped in to arrest Morsi. He has been held in incommunicado detention for four months.

His arrest attracted widespread support. Although elected with 51.7 percent of the freest national vote in Egyptian history, Morsi’s support ebbed away after he failed to meet high expectations raised by the country’s 2011 uprising, or even to achieve more moderate successes in social or economic spheres. Crucially, Egypt’s economy continued to nosedive, precipitating food and fuel crises across the Arab world’s most populous nation. Despite initial signs of a desire to bring the country’s hated interior ministry to heel, it remained unreformed. Protests continued to be crushed by lethal force, while arbitrary arrests and abuse in custody also remained frequent.

Morsi’s prosecution now forms a vital piece in the jigsaw of legitimacy that Egypt’s military and interim government are piecing together in the wake of the coup. The former president is charged with incitement to murder and the violent break-up of a peaceful protest. The charges relate to bloody clashes which took place outside the Presidential Palace on December 5 and 6 last year. Anti-government protesters had gathered outside the facility, protesting against a presidential decree handing Morsi extrajudicial powers and allowing him to push through a constitution drawn up by an Islamist-dominated assembly. After Muslim Brotherhood supporters responded to a call to defend the palace, at least 10 people were killed. The origins of the call to protect the palace remain unclear, but the prosecution will want to trace it back to Morsi.

The former president also faces separate charges of helping a number of prisoners break out of Wadi Natroun prison during Egypt’s 2011 revolution.

Where has Morsi been?

Morsi has not been seen since July 2, when he gave a televised speech in the final hours of his presidency. Since then, he has been held at an undisclosed location with limited access to his lawyers. According to rights group Amnesty International, his conditions “amount to enforced disappearance.”

Local media reports suggest that Morsi has refused to cooperate with his investigators, who have grilled him on his role in a number of events that took place during his presidency.

The Egyptian authorities will try to ensure that minimal footage emerges from the courtroom. Television cameras have been banned and journalists are not even allowed to take their cell phones inside.

Why is the trial important?

After hundreds of Morsi supporters were killed on the orders of Egypt’s new leaders this summer, the military-backed authorities are now seeking to shift the focus back to the crimes of the Brotherhood.

The worst single incident of violence this summer took place on August 14 when security forces forcibly dispersed a thousands-strong pro-Morsi encampment in Cairo. Over 1,000 people were killed nationwide that day in what Human Rights Watch has called “the most serious incident of mass unlawful killings in modern Egyptian history.” The bloodshed was condemned around the world and led the United States to partially suspend an annual $1.3 billion aid package to Egypt.

Although relations with western governments have not suffered as much as one might expect, it is still vital that Egypt provide some sort of legal basis for the decision to remove Morsi from office. The US has emphasised the need for due process to be observed in the former president’s trial. Secretary of State John Kerry made a surprise visit to Cairo on Sunday, a sign that the world will be watching the proceedings closely.