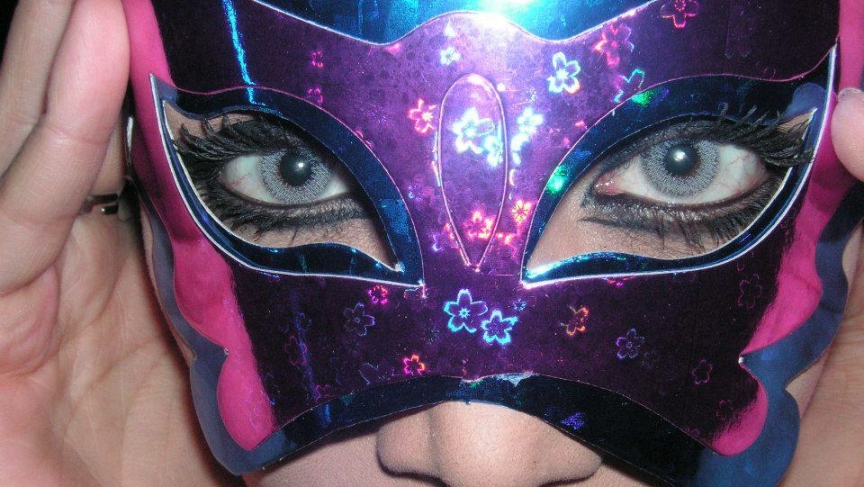 Aynaz wears a mask because she wants to conceal her full identity. Aynaz is a transgender refugee in Turkey who hopes to one day return to her native Iran.

In Iran, homosexuality is illegal and punishable by death. But it’s legal to get a sex change.

In fact, there was a fatwa in Iran allowing sexual reassignment surgery in the early 1960s.

Today, Iran ranks second in the number of sex changes performed annually, after Thailand. But transgender people are far from equals in Iran.

They often get kicked out of school, are arrested, and are rarely able to find work. Many turn to prostitution to survive, or they flee to neighboring Turkey as refugees in hopes of eventually getting resettled in the US or Canada. But, in Turkey, many transgender women end up doing what they wanted to escape in Iran: selling sex to survive.

Aynaz is one of those people. At her apartment in Ankara, Turkey’s capital, she serves me Persian tea with sugar cubes and tells me about her past. Ten months ago, Aynaz says she was working as a prostitute in Tehran, Iran’s capital. She escaped to Turkey as an asylum seeker after two of her transgender friends were killed.

The murderers were not convicted. “And they changed [one of the transgender woman’s] gravestone to a man’s name, even though she had changed to a woman,” Anyaz says. “That was the worst part.”

Aynaz says she doesn’t want to use her full name because she hopes she’ll one day be able to return to Iran and visit her older sister. Aynaz grew up in a small town in Northern Iran where she was harassed, and frequently arrested by the etalaat, informants employed by Iran’s Ministry to spy on citizens. As a little boy, her crime was acting too feminine.

“The etalaat would arrest me and make fun of me,” she says. “They’d take me to jail and take pictures of me. They tell me, ‘Take off your clothes so we can see if you are a girl or boy.’ I didn’t want to, but they would make me.”

By 15, Aynaz was expelled from school for not heeding numerous warnings about wearing makeup or dressing in women’s clothing. So, two years later, at the advice of a psychologist, Aynaz got a full sex change. She thought that would make her life easier — because while being gay can lead to the death penalty in Iran, sex changes are legal and sometimes even government subsidized.

But things only got worse.

“When I first got my sex change, I wanted to prove to everyone that I was a real woman and could get a husband,” Aynaz says. “When I finally got engaged, two days afterward, someone informed my fiance’s family that I was a transgender person.

"They showed pictures of me from before, and then the mother of the boy asked me, ‘Can you have children?’ When she found out I couldn’t have children, she says I can’t marry her son.”

After that, Aynaz was forced to leave her home and move to Tehran.

“We weren’t in the position to get jobs. It wasn’t possible. We didn’t have the education, and no one would have hired us anyway," she says. "So we would find men that wanted sex. Either one night, or one hour, we’d be with them. And that was because we needed money, not because we wanted to.”

Like in most parts of the world, prostitution is illegal in Iran. But Aynaz says transgender prostitutes weren’t as worried about getting arrested in Iran as they were of getting raped by the basij, Iran’s so-called ‘moral’ police (the plain-clothed police responsible for killing many civilians after the 2009 Iranian presidential elections.) Aynaz says the basij knew which corners transgender prostitutes would hang out on, and they’d often round them up and rape them — or sometimes just try to get a date.

When two of her transgender friends were killed, Aynaz decided it was time to leave Iran. She bought a one-way ticket to Ankara and applied for asylum with the United Nations High Commissioner for Refugees (UNHCR). Her goal was to resettle in the US or Canada. But that process can take up to three years, and Aynaz quickly ran out of money.

Veysel Essiz is with Helsinki Citizen’s Assembly, a refugee advocacy group in Istanbul. He says although Turkey is one of the original signatories of the 1951 Refugee Convention, which is the backbone of the international asylum system, Turkey maintains a geographical limitation on who can be a refugee.

Essiz says Turkey only allows permanent refugees coming from Europe. So refugees from Iran, or any other part of the Middle East, Asia, or Africa, can never have permanent legal residence in Turkey.

The problem for refugees is trying to survive in Turkey while they wait to be resettled. Essiz says neither the Turkish government nor the UNHCR provide any substantial assistance to refugees, so people are on their own. And while most refugees can find under-the-table jobs here and there to make ends meet, transgender refugees are out of luck.

“You have to rely on yourself to arrange your accommodation, covering health costs, or to find a job,” he says. “Getting a work permit is possible in theory, but impossible in practice. So it is the lack of financial support that leads these people to pursue sex work.”

Annika Sandlund is a Senior Protection Officer at UNHCR in Ankara. She says there simply isn’t enough money to help every single refugee in Turkey, because there are millions of them.

“We have a financial assistance program, but it’s extremely limited, unfortunately, because UNHCR as an organization works on voluntary donations,” says Sandlund. “Turkey is seen by many countries as a relatively affluent country compared to many countries in Africa, so amongst many states there’s a slight reluctance to fund UNHCR operations here.”

Sandlund says LGBT Iranian refugees feel discriminated against in the public sphere — especially among other refugees and asylum seekers.

“They also report that other refugees see them as ‘lesser’ refugees,” she says.

Back in her apartment in Ankara, Aynaz says she’s lucky to have met a few Iranians who accept her, because, for the most part, it’s other Iranian refugees who harass her the most.

“Iranian refugees in Turkey treat us worse than Turkish people,” Aynaz says. “If an Iranian finds out, they start talking behind your back. They’ll tell everyone, ‘Did you know that she used to be a man?’”

Other Iranian refugees will also sometimes out transgender people to their employers, just so they can get their job for themselves or for a friend. And no job means no money.

Aynaz says after two months in Turkey, she was kicked out of her apartment for not paying rent. She packed her small suitcase and went to a local nightclub. She says she didn’t know where else to go, and didn’t want to sleep on the streets that night. She sat down at the bar, ordered a beer, and started to cry.

That’s when a Turkish man sat down next to her and told her she could live with him for awhile — but with a caveat: he wanted her to have sex with him.

“He wanted so much sex from me all the time that I couldn’t handle it,” Aynaz says. “I told the UNHCR and they asked if I wanted to take him to court. I told them that I couldn’t, because even though he was taking advantage of me, he never threw me out of the house, and he didn’t leave me homeless. UNHCR wasn’t going to give me a room to sleep in.”

Aynaz says she hates the guy, but she’s still ‘dating’ him because he now pays her rent. She says putting up with him is better than being on a street corner.

Aynaz recently received a letter from UNHCR saying she’s been accepted as a refugee in Vancouver, Canada. There, she says, she’ll get enough government support to go back to school and eventually get a real job, which she says is all she ever wanted in Iran.

She says the idea of starting a new life in Canada helps her deal with the fact that life in Turkey ended up being a lot like life in Iran.