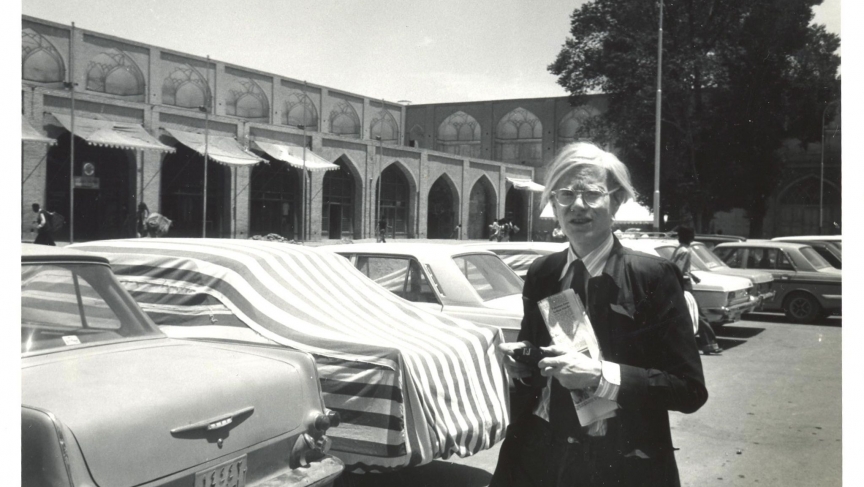 Andy Warhol is famous for his pop art work, especially his painting of 32 Campbell's Soup cans. Few remember he once painted the queen of Iran.

He went to Iran in 1976, when it was led by the Shah, Mohammad Reza Pahlavi. Three years later, the Shah would be overthrown in the Iranian Revolution.

Fereydoon Hoveyda, Iran's ambassador to the United Nations at the time, extended the invitation to Warhol to come to Iran and create a portrait of Empress Farah Pahlavi. Warhol was joined on the trip by Vanity Fair's Bob Colacello, Warhol's biographer.

"Tehran then seemed quite modern. For the most part, the world that we saw [was] very modernized," Colacello recalled recently.

The empress had a passion for the arts, Colacello says, and wanted to create a few museums, housing works ranging from traditional Iranian to modern and Western creations.

One of those museums is the Tehran Museum of Contemporary Arts, where the empress housed the art she collected. According to Colacello, the collection remains in the basement of the museum and is probably worth $2.8 billion.

Warhol liked the empress and, apparently, she wanted to get to know him better, too.

"Andy was invited to a state dinner for the shah of Iran, given by the president and Mrs. Ford. At that dinner, he had a brief conversation with her. In fact, after the dinner, he was kind of avoiding her because he said he was afraid she was going to dance," Colacello says. "She told me later all she wanted to do was talk to him some more."

Colacello says their trip was criticized.

"The Village Voice newspaper ran a front page photograph of Andy in front of her portrait and the headline was, 'The Beautiful Butcher,' and the opening sentence was 'Torture tastes better with caviar,'" he recalls.

To Colacello, however, this was just "red, yellow journalism. It was guilt by association. It was left-wing McCarthyism."

Shortly after the state dinner, Iranians rebelled against the Shah's regime and won his removal of power. That ended Farah Pahlavi's art collecting days. It's not clear how many copies Warhol made of the portrait of the empress.

Colacello says some of the copies are at the Tehran Museum of Contemporary Arts and a couple of others can be seen at a restaurant in New York.

Bob Colacello spoke about his trip to Tehran with Andy Warhol at the Asia Society: