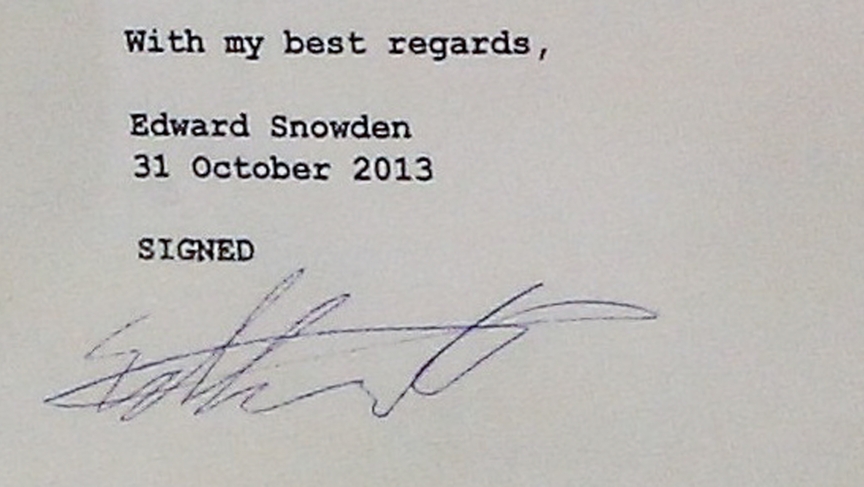 The signature on the letter of fugitive former US spy agency contractor Edward Snowden is pictured during a news conference in Berlin, Nov. 1, 2013. "Speaking the truth is not a crime," read the letter.

Give a quick glance at the headlines this weekend and you'd think Edward Snowden, the man accused of leaking thousands of pages of National Security Agency documents, had asked for a pardon. All used the word "Clemency."

The list goes on. And using the word clemency seemed a deliberate choice. It's not a word commonly used in say, a bar conversation. And it was used by influential people, including Senate intelligence committee chairwoman Dianne Feinstein, a California Democrat, and her House counterpart, Mike Rogers, a Michigan Republican.

But, did Snowden even ask for clemency?

The source of all these clemency claims can be traced, quite easily, to a letter, and a separate Op-Ed, written by Snowden. In the letter, given to Hans-Christian Ströbele, a member of the Green Party in the German Parliament, Snowden stated:

"Though the outcome of my efforts has been demonstrably positive, my government continues to treat dissent as defection, and seeks to criminalize political speech with felony charges that provide no defense. However, speaking the truth is not a crime. I am confident that with the support of the international community, the government of the United States will abandon this harmful behavior. I hope that when the difficulties of this humanitarian situation have been resolved, I will be able to cooperate in the responsible finding of fact regarding reports in the media, particularly in regard to the truth and authenticity of documents, as appropriate and in accordance with the law."

Bruce Fein, a deputy assistant attorney general under President Ronald Reagan, thinks calling this letter a request for clemency is a stretch.

Fein was, until recently, the legal counsel to Lon Snowden, Edward's father. He says, in legal terms, just saying you didn't do anything wrong isn't a request for a pardon.

"The whole idea of issuing clemency, or a pardon, is acknowledging that you have done something wrong," he says. "Namely, violated the law."

Snowden didn't appear to do that in his letter. But Fein cautions the whole thing is murky given the lack of direct access to Snowden. Did he even write the letter? Did somebody else write the letter? You just can't be certain.

But you can be certain of one thing. Whether he asked for clemency or not, US officials don't seem ready to offer it.