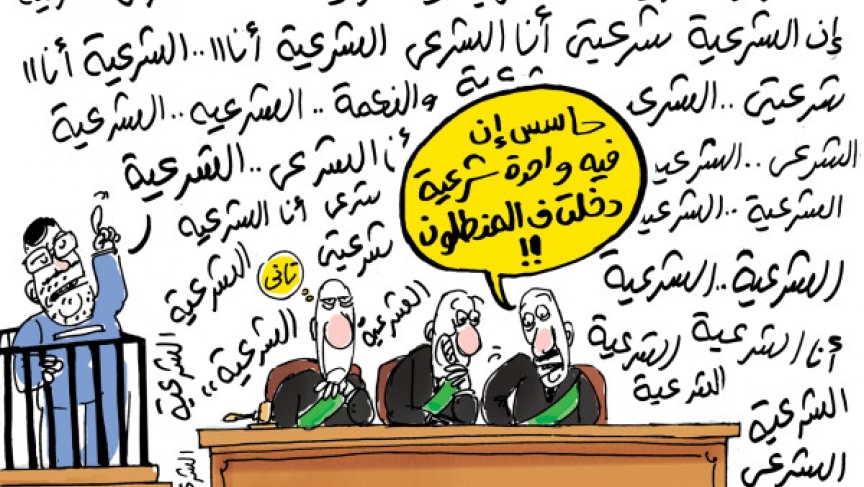 Egyptian cartoonist Doaa Eladl shows a defiant Mohammed Morsi on the first day of his trial in Cairo, which adjourned after things turned chaotic. In the cartoon, Morsi is repeatedly shouting, "I am the legitimate president!" The judges get impatient. Important note: Doaa Eladl is not a fan of Morsi.

How powerful are the Mexican drug cartels? Powerful enough, evidently, that in one Mexican city they've been able to shut off the sale of tortillas. Really.

The BBC's News from Elsewhere blog reports that such dictates from cartel commanders come on top of the continuing violence, which includes the murder of five priests in a neighboring area.

We've been publishing the daily Global Scan for about a month, and now we need your feedback. Please tell us what you think and how we can improve it through this brief, five question survey.

The Telegraph reports that police suspect many of the 1500 pieces were among the "degenerate art" confiscated from Jews in Nazi Germany.

The apartment owner was caught in a German sting targeting people with undeclared Swiss bank accounts. His father was art dealer Hildebrandt Gurlitt, who claimed the confiscated artwork had been destroyed in the firebombing of Dresden in 1945.

How do you explain widespread US spying? Here's the NSA's top 10 reasons

It's not easy to justify eavesdropping on leaders of friendly nations and their citizens. So the NSA prepared a handy list of responses for White House officials, for Congress and even for leaking to the media.

Al Jazeera America reporter Jason Leopold used a Freedom of Information Act request to obtain the NSA "talking points." He told PRI's The World that two themes — 9/11 and the need to "connect the dots" — ran through the top 10 reasons.

Today is Russia's Day of Unity - but not for everyone

The anti-gay climate in Russia continues with a weekend attack at an LGBT center as the latest example.

One person was hospitalized after men armed with compressed air pistols attacked the center in St. Petersburg — just a day after an anti-hate rally organized by Russian LGBT activists. The Telegraph reports that the violence occurred on the eve of Russia's Day of National Unity, which has been taken over by far-right groups.

Here's how Einstein screwed up General Relativity, and other tales of brilliant blunders

Even scientific geniuses make mistakes. For example, Einstein threw in an extra "cosmological constant" into his General Relativity equations to explain why gravity wouldn't cause the university to collapse on itself.

Later, he removed it — and it turns out that was the real mistake. Studio 360 looks at a new book, written by a NASA astrophysicist, that examines the scientific blunders of some of the world's greatest scientists.

Tropical Storm Sonia has turned into a tropical depression as it moves across the central Mexico Pacific coast. Six to 10 inches of rain are forecast for the area in Sinaloa state, with sustained winds of 35 mph and stronger gusts, according to the US National Weather Service.