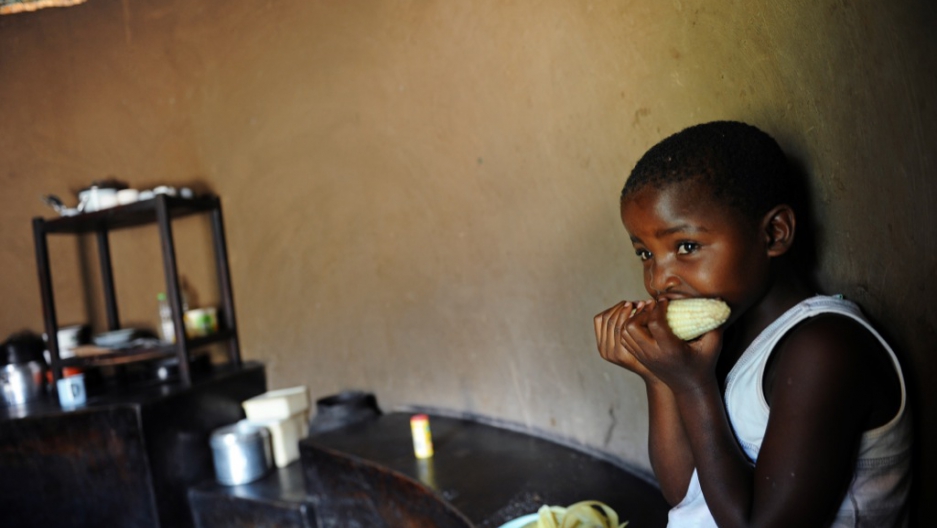 A child eats maize at home in Domboshava, 60km north of Harare, on March 15, 2013. UN officials said in October than more than 2 million Zimbabweans might need food assistance in 2014 because of a grain shortage.
Credit: Alexander Joe
Share

JOHANNESBURG, South Africa — Villagers competing with animals for wild fruits. Neighbors concealing bags of maize from each other. Students dropping out of school to help find food for their families.

These are just some of the reports from Zimbabwe that reveal an increasingly severe food shortage, one that the United Nations’ World Food Program (WFP) has warned could leave 2.2 million people — a quarter of the country’s rural population — in need of food assistance.

Officials from the WFP say the food shortage is the worst since 2009, the year that Zimbabwe ditched its beleaguered currency for the US dollar to stop out-of-control hyperinflation.

The first few months of 2014 are expected to be especially difficult, during the “lean time” ahead of the next harvest. The WFP has already started distributing food and cash, but in some parts of Zimbabwe, local residents and government officials fear it's no match for a looming crisis.

Several factors are to blame for the shortage of food: erratic rains and drought that caused havoc with this year’s crops; a surge in the cost of seeds and fertilizers; and a jump in the price of grains and cereals, which may escalate as demand grows.

“Many districts, particularly in the south, harvested very little and people are already trying to stretch out their dwindling food stocks,” said Sory Ouane, the WFP’s country director, in a statement.

Zimbabwe was once famously a regional breadbasket, with its large commercial farms producing enough food to feed its own people and to export abroad.

Under President Robert Mugabe’s land reform program, which began more than a decade ago, many white-owned farms were invaded and seized, and the land turned over to black Zimbabweans. Some of the new farmers have benefited, but in other cases the land was left idle or became less productive.

Farmers have in recent years increasingly abandoned maize, wheat and other staple crops, and are instead growing cash crops like tobacco, especially as tobacco prices skyrocketed.

Production of maize, the country’s main staple food, has dropped by a dramatic 67 per cent this year, according to Charles Chikaura, chairman of Zimbabwe’s Grain Marketing Board.

Food now needs to be imported from neighboring countries, including Zambia and South Africa. But with unemployment in Zimbabwe at more than 60 percent, many people will be unable to afford increasingly expensive basic food supplies like maize meal.

The Zimbabwe News, an independent daily, reported this week that villagers in some rural areas are buying maize surreptitiously at night to keep their supplies secret.

“You have to go with a big suitcase to hide it so that you don’t attract unnecessary attention from other villagers,” Tofanei Mutambu from Zvidzai village told the newspaper, “because they will swarm your home begging for food for their families.”

The number of school dropouts is reportedly increasing because students are too hungry to concentrate. There isn’t enough money for meals at many schools, so the dropout rate could rise.

Hunger is leading some people to scrounge for wild fruit such as that of the baobab tree.

William Mutomba, member of parliament for Buhera North in Manicaland province, said a humanitarian crisis is unfolding in his district.

“To make matters worse, we do not have much of wild fruits and where they are available, people have to compete with wild animals because they are also affected by the drought,” Mutomba told the Zimbabwe News.

“I cannot hide this,” he said. “We have a crisis here and people are suffering.”